The first Earth Day was observed on April 22nd 1970 in the USA, providing a voice for emerging concerns around environmental degradation. Senator Gaylord Nelson, inspired by the energy of student anti-war protesters, and the emerging public consciousness around air and water pollution, began to form an idea for a day of activism and education across the USA. With the aid of Denis Hayes, a then young activist, they mobilised the student community, community organisations and faith groups to organise ‘Teach-In’ events and rallies. Earth Day inspired 20 million Americans to take to the streets, parks and auditoriums to demonstrate, making their voice heard around the deterioration of the environment.

tional Earth Day. Earth Day 1990 mobilised 200 million people in 141 countries and helped to pave the way for the 1992 United Nations Earth Summit. Today Earth Day is recognised by millions of people, governments and organisations globally. As awareness of the climate crisis, and disillusionment with the low-level climate commitments made my governments grows, people are beginning to rise and demand change and greater action to protect our planet. As with the 1970s, young people, students, activists and others are taking to the streets and utilising their digital presence to demand change. Let Earth Day 2021 become a day of focus, bringing people together, empowering, supporting, listening and learning from each other. #EarthDay2021

(Source of content: The History of Earth Day | Earth Day, Photo by Markus Spiske from Pexels)

Our Positive Tipping Points are bringing change to the climate crisis

What are Positive Tipping Points?

In a time of climate and ecological emergency a lot has been made of ‘tipping points’, moments when a small change can trigger a large and often irreversible response. For example, the loss of the Amazon rainforest or West Antarctic ice sheet. ‘Positive tipping points’ identify sources of hope where humans can come together to identify and trigger transformative change towards sustainability.

“If we’re going to avoid the worst risks from climate Tipping Points, we need to identify and trigger positive social tipping points“

Within the UK the introduction of a carbon tax, EU emission scheme and increased power generation from renewables have combined to create a Positive Tipping Point. Within the last five years coal power has become unprofitable and dropped to almost zero. At the University of Exeter there is a lot of work going on in this area which the GSI can bring together through a multi-disciplinary approach. Reducing the cost of offshore wind and solar and improving energy storage to produce clean and affordable energy options will work towards further Positive Tipping Points. A major challenge the University of Exeter is currently working on is upgrading power networks to support renewables through decentralisation, decarbonisation, and digitalisation to achieve net-zero carbon emission by 2050.

“We need to control the network in such a way that we can take more and more renewable energy, and when generation is higher than demand we can store that energy or convert to support low-carbon transport.”

Electric Vehicles are better for the environment than petrol or diesel but are more expensive (except in Norway where their progressive tax system has made them cheaper than comparable models). The more people buying electric vehicles the cheaper they will become, and more investment can be made into improving battery storage, the key contributor to the cost of such vehicles. This would lead to a Positive Tipping Point and reinforce positive feedback for clean energy production through the investment in improvements to battery storage of renewable energy, leading to an increase in renewable power generation, positively impacting the electrification of transport systems.

“Assuming the cost of EVs continues to fall, we expect the Positive Tipping Point quite soon – in the 2020s.

Ecosystems are being degraded or destroyed globally with negative consequences for people, biodiversity and the climate. Positive Tipping Points in human society could transform our relationship with the natural system and sustain life on earth. University of Exeter Researchers are currently working on collaborative projects globally investigating the causes of ecosystem destruction and searching for solutions to make the future more sustainable. These include projects focused on the wildfires in Indonesia’s peatland, The International Small Group and Tree Planting Program in Kenya, Uganda, Tanzania and India, and the Inga Systems Tree-based tropical agriculture solutions focused on the ecosystems of Latin America. These projects all involve restoration work and rely on local people, organisations and governments for their success, recognising the influence humans have over the ecology of the land surface.

“We believe that the message of Positive Tipping Points can bring concrete hope that we can accelerate decarbonisation and stop the climate and ecological crisis.”

Respecting the ethos of the first Earth Day’s focus on ‘teach in’ the GSI Community has provided some interesting and exciting resources for you to access:

Sarah Scaife is a PhD candidate in Performance Practice. In Sarah’s research the earth is often seen as a site of healing. In her recent podcast series ‘Medicines of Uncertainty (slow radio for wellbeing)’ she leads you on a conversation in the space between her, you and the so-called natural world. The programmes are created and recorded in South Devon, combining her own field recordings with samples from BBC Soundscapes for Wellbeing.
Medicines of Uncertainty (slow radio for wellbeing)

IngaSystems brings together three projects focused on agroforestry and silvopastoral systems in Latin America led from the University of Exeter. Scientists from Exeter, Royal Botanic Garden Edinburgh, Royal Botanic Gardens, Kew and University of Edinburgh have teamed up with the Instituto Ouro Verde (IOV) to create a social approach to sustainable tropical agriculture. The projects support and encourage local communities to adopt sustainable farming methods that provide food security and income whilst simultaneously improving tree cover and soil conditions in one of the most degraded areas of Amazonia. 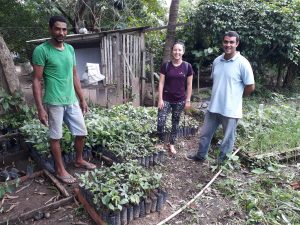 Project aims to apply state-of-the-art genetic approaches to identify the closest relatives of Inga edulis and other species already used in AF. These related species are the most likely to have characteristics suitable for AF. In consultation with stakeholders and smallholders, we have established growth trials of some of these species to ensure subsequent uptake and use. 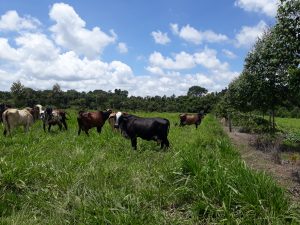 This project focuses on solving the issue of Inga seed availability, which cannot be stored, by planting community seed orchards as a basis of scaling up Agroforestry (AF) and Silvopastoral (SPS) systems across Mato Grosso State, Brazil.  In addition, it will develop 20 family-farm, Inga-based SPS systems as demonstration projects, encouraging 250 families to adopt them as a means
of improving livestock feed productivity and to capitalise on rises in milk productivity. Working with our partner institution Instituto Ouro Verde (IOV), our ‘grass roots’ approach (involving smallholders in tree species selection and monitoring) can be scaled up regionally.

The research aims to better understand the current roles, strengths, and barriers to developing women’s social and economic autonomy and to increase the socio-economic impact of the agroforestry income-generating initiatives. It will investigate whether and how building on the strengths and overcoming the barriers / constraints can foster greater empowerment of women, and by association their families through developing sustainable incomes. It will also investigate to what extent these activities are enabling them to gain a stronger negotiating position and more influence in intra-household decision-making and income distribution.

Predictions on whether the Earth will be able to feed a greatly expanded population have swung over time. The demographer John Bongaarts of the Population Council speaks of a period of pessimism, followed by one of optimism, which has more recently turned again to pessimism. The initial period of pessimism was no doubt influenced by the famine in China from 1959 to 1961, the biggest famine in history, and reached its climax after the publication of Paul Ehrlich’s Population Bomb in 1968. From about 1980, however, with the provision of family planning, the rate of growth of world population declined, and with it there was also a decline in poverty and malnutrition in much of the developing world, especially China and India. Concern about population then fell off the global agenda. (The webinar did not mention the United Nations Conference on Population and Development in Cairo in 1994, which kicked family planning into the long grass and so contributed to population falling off the global agenda.) The mood of optimism was, however, not to last. There was a return to pessimism from about 2000 to do with a number of factors. Global heating had turned out to be close to the most pessimistic predictions of the climatologists and rivers were running dry. Funding for family planning was reduced. With AIDS under better control, the population of Africa is projected to rise from one to four billion.

But debate is not just about facts. Optimists hold with some confidence to the view that until the end of this century there will be enough for all. They consider that some destruction of nature is acceptable and some increase of inequality is inevitable, though benefits will, they expect, trickle down. The pessimists pay more attention to the question of who benefits and who loses. Environmental degradation most affects the poorest and they forecast that many will starve. The optimists say we don’t need to calculate for rare events, the so called “black swans”, while the pessimists see interactions of, for example, climate change, disease and violent conflict, increasing the likelihood of catastrophic events. Predictions are largely a matter of what the forecasters choose to focus on and what they exclude. Some say, for example, that traditional economists exclude many factors as externalities, take natural resources for granted and fail to take account of the earth being finite.

Joint webinar in association with PAA. Population, Food and the Environment | International Union for the Scientific Study of Population (iussp.org)

Holistic Restoration offers a practical way to merge wildlife conservation and rewilding with the production of food, timber, fuel and fibre in a way that heals us and restores our world. Miriam McDonald and Rob Owen have provided a short introductory video and workbook to explain more:

‘On Modern Threats to Environmental Sustainability in the Arctic: The Climate Change Factor‘

Dr Kyriaki Noussia On Modern Threats to Environmental Sustainability in the Arctic – The Centre for Science, Culture and the Law (ex.ac.uk)

The Cybersecurity Factor and the Provisions of Insurance Against Environmental and Cyber Risks in Oil.’

Dr Kyriaki Noussia On Modern Threats to Environmental Sustainability in the Arctic – The Centre for Science, Culture and the Law (ex.ac.uk)

This book provides a dialogue between artists, community representatives, industrialist and educators. It aims to inspire debates on human interactions with the Earth, while our consumption of resources grows and while the environments on which we depend face an uncertain future https://www.waterstones.com/book/of-earth-for-earth/kathryn-moore/dana-finch/9781527276628