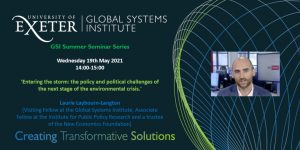 For our seminar 19th May, the GSI hosted Laurie Laybourn-Langton, who gave a talk Entering the storm: the policy and political challenges of the next stage of environmental crisis. Laurie spoke about overall strategy and where we stand in  restoring the natural world and dealing with the adverse consequences of climate change change. Laurie examined the current strategies in in place in relation to mitigation, adaptation, and how we mediate with the suffering. Laurie puts forward his argument that current policies do not constitute the required emergency response and aren’t live to the impacts that will grow with time, hence more explicit work is needed to ensure policies are robust to these consequences.

Laurie is an Associate Fellow, Responding to Environmental Breakdown at the Institute for Public Policy Research, a trustee of the New Economics Foundation, and currently a Visiting Fellow at the GSI. Laurie has worked on political economy and how shifts occur in economic ideas and policies, the role and power of digital platforms, and mobility transitions. Laurie also has an expertise in environmental breakdown, which he is applying as co-authoring a book on how to build a politics capable of responding to environmental breakdown.

Laurie gave his talk through a series of personal experiences, including provocative imagery to communicate the urgency and emotive elements of the crisis. Laurie introduced with the context that through human activities destabilising so many systems, we are now ‘well into the storm’. This also conseqwuence of politics and policy not recognising the pace and depth of the environmental emergency. Through his and colleagues experiences, Laurie noted how there has been a shift in how those that advocate climate change action have shifted from a cautious front of not to be too negative to put off people, to a new, re-energerised movment of recent climate protests. This has had the impact of helping the way discussions within political circles can be had, with the new attention, priority and energy being given.

Laurie then highlighted the transitions of the framings and narratives around the climate change emergency. From around 2018 there was a shift in framing to apply a binary target of ’12 years to save the Earth’ to not exceed with the 1.5 temperature rise, or else risk catastrophic global disaster. But, use of this framing could obscure the truth about being in this climate emergency storm.

Laurie questioned this language in the context of whether we have a credible strategy for repairing and restabilising? Emphasis on the framings of the targets and the threat of surpassing a 1.5 degree warming, misses the key point about the mitigation strategies then needed. Laurie also questions whether we have such a strategy in place to meet much of the Net Zero pledges. Key to reaching goals for Net zero, there is a reliance on technologies. But there is no global strategy in place to support this, and questions still remain whether we can accept the risks and inevitable mortalities to come from our close future. Laurie then demonstrated the current timeline put forward for Net Zero by 2050, highlighting how the status quo of policies are characterised as swapping dirty technologies for clean technologies – without change in behaviours. But this carries with it 3 major problems:

It is then clear, we cannot do what is needed for the tasks at hand, with the current social, political and economical structures.

Laurie then posed the question of how we will continue to fight for these transformative changes, in a world that is to become more de-stabilised? Laurie began by unpicking a quote and critiquing the use of the phrase ‘too late’. Laurie then flagged how the median age of politicians in the UK, is round 50. Younger generations such as millennials and gen-z, will have to live through these ‘too late’ futures, carry the struggles and to not only introduce and win systemic change, but also to implement and maintain it. This creates a vast multi-generational project to re-stabilise and restore the natural world. The binary view of the future does not accurately represent the complexities of feedbacks and impacts, and so no future can be certain or known. This is also because threats and impacts go beyond the local – risk cannot be compartmentalised, impacts ripple outwards and interacts with the social, political and economic contexts. In many systems which are already highly vulnerable, are we operating in a resilient world? This sometimes gets presented as edging us towards a cliff-edge of societal collapse from environmental disaster – but looking at varying degrees of de-stabilisation already happening around the world, it is a far more complex situation than a Hollywood film portrayal. Instead of a cliff -edge, it could be better imaging we are moving off the smooth road we have travelled for many years, onto a bumpier topography.

Laurie concluded with explaining the need to develop more robust political systems, leadership practice and advocacy. Laurie also introduced his new project to help address the problems highlighted in his talk. For information on this project, the questions posed to Laurie and his seminar in full, the recording is available here.