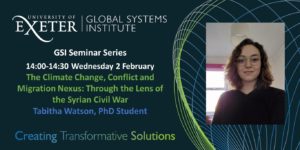 Over the past few decades, there has been increasing conversation – and significant news coverage – linking climate change, conflict and migration. However, analysis of the topic remains largely qualitative and anecdotal in nature. This lack of quantitative data makes the development of robust, evidence-based policy challenging, leading to the growth of more reactionary approaches (e.g. securitisation of migration). In this context, with growing nationalism and xenophobia, it is vital to gain a more nuanced, data-driven perspective on the situation. This is where the concept of whole-system analysis of the climate change, conflict and migration nexus comes into play. 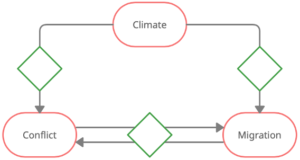 Although all three aspects of the nexus have been conclusively linked, the majority of quantitative studies have tended to address pairwise interactions. There is vibrant academic debate over the role of climate; its role in both conflict and migration has been disputed. However, regardless of the current perceived significance of the global climate, without drastic mitigatory action we are projected to vastly exceed the 2C threshold set out in the Paris Agreement. This will have severe consequences for large swathes of the population, and there are likely to be knock-on effects that ripple across society. It is, therefore, important to consider the ways in which this could impact both mobility and security.

In some spheres, the ongoing Syrian civil war is considered to be one of the first climate-affiliated conflicts. To unpack this, and the controversy around it, it is important to delve a little into the context. Historically, Syria has been relatively fertile and agriculturally productive. However, since the 1980s, it has experienced three severe droughts. The most recent of these, starting in 2006/7, has been recorded as the worst in 900 years. As an exacerbating factor, this drought came on the heels of a deep and long-term agrarian crisis; this had been brewing for decades as the Syrian regime pursued an agrarian development plan which relied on the super-exploitation of water resources, especially groundwater. Groundwater extraction, in turn, relied on the availability of cheap diesel – kept that way by massive government subsidies.

For a variety of reasons, Assad chose to remove these subsidies in 2008/9. This caused the price of diesel to rocket up by over 300%, rendering vast areas of land unviable and causing the displacement of at least 1.5 million people from rural to urban areas. The infrastructure in cities and towns was already sub-par, and it has been argued that the influx of the rural population caused some degree of tension on top of pre-existing ethnic fractures and tensions within Syrian society.

So, with the scene in Syria set with drought, loss of livelihood, mass displacement,  creaking national infrastructure and a general undercurrent of discontent, the Arab Spring began rippling out from Tunisia across the Middle East. In March 2011, pro-democracy protests in Syria were crushed with deadly force. This sparked further protests and, as we know, spiralled into the ongoing conflict. As various factions became involved and the fighting intensified, people began to flee and seek refuge. This has been framed by Western media as a migration ‘crisis’. Here, we see the contested link between climate and conflict snowball into conflict leading to migration. This can then be seen to lead to a different type of, largely ideological, conflict in the destination countries.

However, the presence of a climate signal in the outbreak of civil war in Syria is disputed. Geopolitical events have muddied the water; this is especially sensitive in this case, as the Assad regime have sought to push the climate-conflict narrative in order to absolve themselves of the blame for fomenting the catastrophic agrarian crisis that preceded the drought. Some commentators have also pointed out that neighbouring countries experienced a similar lack of precipitation but did not topple into civil conflict. Therefore, there must have been some Syria-specific factors. However, neither of these arguments are mutually exclusive of a climate signal.

It is important to note that those who argue that there is a climate signal are not stating that climate change is a primary cause of the conflict, rather, that the presence of the drought exacerbated existing conflict precursors and ‘oiled the wheels’, causing the conflict state to occur faster than it may otherwise have done. The question, for both sides, is: would the agrarian crisis alone have been sufficient to trigger the civil war?

To answer this, modelling the climate change, conflict and migration nexus as a complex system is the next logical step. It will allow for the identification of emergent properties, such as a conflict, from the combination of social, environmental and political variables. A vehicle for complex systems analysis is agent-based modelling. Here, the system is made up by a set of agents, each with bounded free will. By programming these agents with relevant parameters, it should be possible to gain a bottom-up perspective of human behaviour under different conditions and scenarios. Through this, it should be possible to elucidate the significance of each factor within the climate change, conflict and migration nexus in relation to each other.