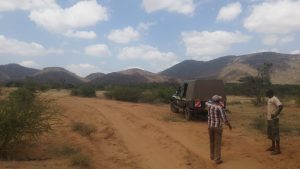 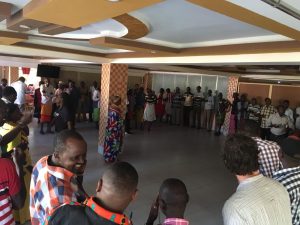 Everyone should see the world from a plane window from time to time. Seeing the world from a fresh angle is like stepping back from a painting, tilting your head to the side and shutting one eye; it opens the mind to seeing new patterns and making connections that might have been missed. Images of Earth from space taken by the Apollo crews half a century ago fundamentally altered our perceptions of ourselves and the dynamic, beautiful, ostensibly fragile but surprisingly robust living planet we inhabit. Seeing the surface of the Earth from 40,000 feet remains a spectacular reminder that our home planet is a pretty special place.

Watching the sun set over the Nile as we flew across the Nubian desert yesterday evening, the ribbon of water reflecting the light seemed to physically tie the landscape together. In the absence of national boundaries drawn on a map, the river is the defining feature of Northern East Africa and seeing it like this you can almost feel the fundamental role it plays in sustaining, connecting and provoking conflict throughout the region. A patch of huge circular irrigated fields surrounded by the barren desert was a vivid reminder of the vulnerability of the whole system.

It felt fitting to be flying over one of the earliest cradles of human civilisation, of which the foundation of the entire culture was the seasonal rise and fall of the river waters, on our way to talk to people who are finding new ways to build sustainable relationships with their landscapes and ecosystems in a world in which humans have become a global force.

With my colleague Becky Stedham of The Landscapes and Livelihoods Group, I’m in Kenya to learn about two organisations who have developed models for communities to take ownership of the conservation and restoration of the ecological health of their landscapes. In doing this they are increasing and diversifying their livelihoods and becoming more resilient to climate change and other dangers. 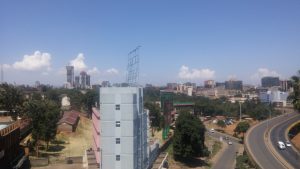 A peaceful Sunday morning in Nairobi before heading North

First, we are travelling North from Nairobi around the flanks of Mt Kenya to visit the Northern Rangelands Trust (NRT); a group of community conservancies who together cover a vast area of Kenya. Following that we will be spending time with The International Small Group Tree Planting Program (TIST), visiting members who farm smallholdings in the volcanic soils surrounding Mt Kenya and Meru. Partnerships with organisations like these are really exciting opportunities for us to work with groups having truly significant impacts in their communities and landscapes. Our goal is to get to know them better and begin to understand how they work so that we can start to explore how as a research community we can support them in monitoring, understanding and extending their impacts.

Building relationships with people experiencing the day to day and year on year challenges of environmental and social change is at the core of what we want to do at the GSI. In doing so, our intention is that we can use our research capacity to support them in understanding the changes taking place and developing useful responses. The funding for this trip, from the UK Government’s  Global Challenges Research Fund, is intended to support the development of these relationships and it’s fantastic that such opportunities exist. We also want to learn as much as we can about groups that seem to be doing really well at connecting the wellbeing, opportunities and resilience of people with the ecological health of the landscapes they inhabit. If we can understand something about why these projects are so succesful, then we may be able to help others build these kind of win-win approaches elsewhere. 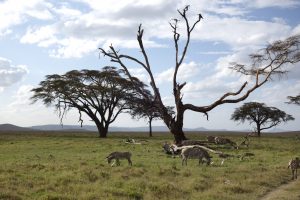 So for now, we’re really excited to be heading north early tomorrow morning, and I’m sure I’ll have plenty to say about the NRT in a few days time!

This is the final weekend to sign-up for the #GlobalTippingPoints Conference in #Exeter.

Learn about #TippingPoints & how they can help fight the #ClimateCrisis: 12 - 14 September!

4 days to go before the in-person registration deadline for the #ClimateTippingPoints conference
@GSI_Exeter @UniofExeter
Sign up to influence & trigger positive #TippingPoints to help face the #ClimateCrisis: https://t.co/ORbLDs0kDR

Only a week to go before the early registration deadline for the #ClimateTippingPoints conference @GSI_Exeter @UniofExeter
Sign up to influence & trigger positive #TippingPoints to help face the #ClimateCrisis: https://t.co/ORbLDs0kDR

Reply on TwitterRetweet on Twitter11Like on Twitter6Twitter
Load More...
Skip to toolbar