The GSI Workshop: Exploring synergies between Earth sciences and astronomy took place on 18 February 2022, bringing together around 40 academics from a wide range of disciplines, both in person and online. Prof. Tim Lenton talked about Exo-Earth system science at Exeter. He emphasized that we need to get the message out that planets beyond the solar system are being discovered. Tim discussed what life might look like on exoplanets and our prospects for detecting it. Simple life emerged on Earth as soon as conditions were favourable, so we can expect it to have evolved on many other planets. Tim argued that “life is not a passive actor set on a stage”; it completely transforms its planet, so we should be able to detect biosignatures  on exoplanets in coming decades (notably with upcoming direct-imaging missions). On the other hand, complex life, including ourselves, results from some very difficult and improbable transformations, so it is unlikely to exist elsewhere. 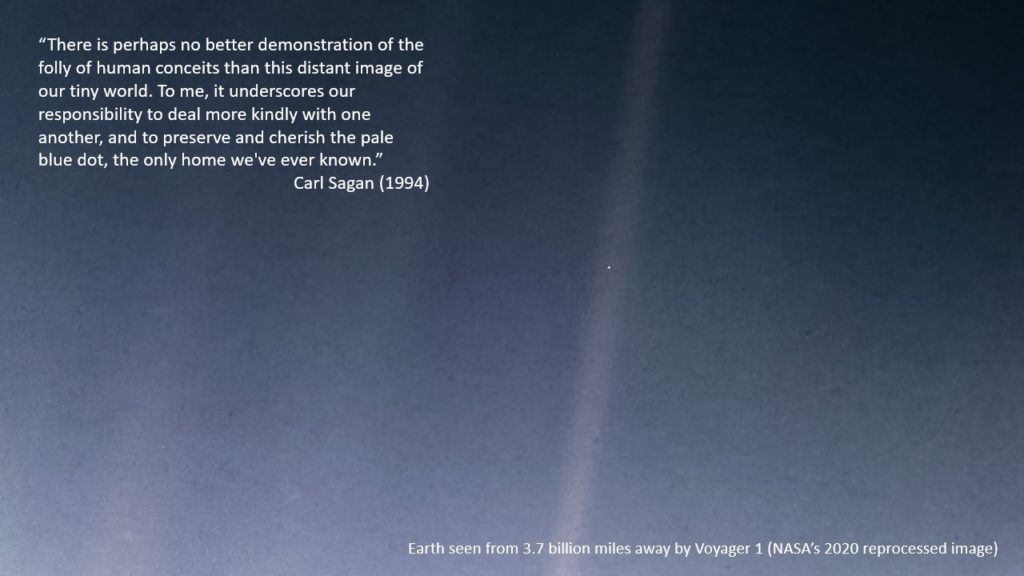 The Pale Blue Dot was a recurring theme throughout the Workshop. Prof. Tim Lenton pondered: “[We are] thinking about how common life is. Is it going to touch us emotionally in a way that allows us to reflect back on our own presence and existence on Earth, [and will this help us] alter our relationship with Earth?” (slide by Prof. Tim Lenton).

Jake Eager talked about his ongoing PhD work Towards coupled modelling of the biosphere and atmosphere for Archean-like climates. Jake focuses on terrestrial planets that orbit small, cool M dwarf stars. These are the most common stars in our galaxy, and have long lifetimes, which could give life more time to emerge. If life exists on these exoplanets, it might resemble life that existed on Earth during the Archean (about 3 billion years ago) more closely than present-day life. Jake is using the Met Office’s Unified Model for Archean Earth to estimate methane concentrations for these planets. Jake’s work shows that by modelling the atmosphere and biosphere together, we can ultimately improve our understanding of both.

Dr Arwen Nicholson talked about Biosignatures independent of population dynamics. Arwen has created a simple model based on an Archean Earth-like planet that considers air-ocean exchange, carbon-silicate cycling and a very simple biosphere in the form of microbes which produce methane, which then acts as a strong biosignature for the planet. By varying the death rate of microbes, Arwen finds that the concentration of methane in the atmopshere, and thus the planet’s biosignature are relatively insensitive to the detailed properties of the biota.

Prof. Tim Naylor presented the Terra Hunting Experiment, of which Exeter is a major partner. Terra Hunting is the world’s most viable experiment to discover terrestrial, temperate planets orbiting stars like our Sun within the coming decade. For this, Terra Hunting will measure the wobble of 30 stars, on every observable night over 10 years. Based on the occurence rate of these planets (as measured by recent surveys such as Kepler), we expect to discover a handful of planets with similar mass and stellar irradiation as Earth. These planets will be prime targets for direct imaging in the next 20-30 years.

The majority of in-person participants mingled at tea and coffee after the talks (which are available to watch on the GSI’s Youtube playlist). Stay tuned for more talks and opportunities to discuss this exciting topic in future events! Please get in touch with  if you have any ideas and suggestions.

I was trained as a citizen of the Holocene and spend my career working in Holocene institutions striving to consolidate their role in the Anthropocene. When I was a student it was made clear that species extinction was an aberration restricted to exceptional and fragile places like oceanic islands and restoration ecology was narrowly focussed on the return to a historical model. How things have changed and how fast they have changed.

Gaia informs us that life drives planetary systems and that we are now the species that drives ecosystem and global change. As such we are the reckless author of the extinction crisis. We also know that species, whether bacteria, plant, fungi or animal, are the cogs in Gaia’s swirling mechanism. For most people the cogs of Gaia are invisible and as such profoundly under-valued.

Let’s explore two topics at this conference in honour of James Lovelock’s Centenary.

Firstly, how can species conservation and large-scale ecosystem regeneration be better used to manage global systems? Can we use it to rebuild or bolster the recycling of elements?
In thirty or so years I have seen ecological restoration jump in scale and scope from the small fenced plots on oceanic islands to landscape scale projects such as the Everglades Restoration project in Florida or the vast rangeland restoration initiatives of the Northern Rangeland Trust in Kenya. These projects wrap together concerns about endangered species with social issues, disaster mitigation and economic growth. A few nations, such as South Korea, have to a large extent rebuilt their natural capital through reforestation, and many African nations have made impressive tree planting commitments through the Bonn Declaration (although we fear the eucalyptus may dominate these new landscapes). Perhaps what is most impressive is that these large-scale landscape improvements have been driven both by global agencies and the initiatives of local communities. An inspiring example being the transformation of degraded farmlands through agroforestry by farmers in the Sahel.

Secondly, how can the reductionist biological institutions of the Holocene work with the Gaia model to better orchestrate and inspire a prosperous Anthropocene? Historically we have created taxonomically defined biodiversity institutions and what we need are networks of institutions that collectively promote a good Anthropocene. Can we harness the expertise of the zoo, natural history museum and botanic garden to celebrate the planetary engine, life, and to influence the way we value our lives and values? Part of the problem is that current funding models for key institutions can create a domestication of the mission, where the ultimate planetary impact of an institution is undermined by a focus on income generation. Perhaps it is time to reinvent these funding models.

In the last few years two projects have given me hope. One is a small-scale community project in Baringo, Kenya, that supports farmers to convert profoundly eroded bush into profit making hay fields using native grasses. The other is the healing of the native forests and watershed of Limahuli Valley, Kauai, after the installation of stock proof fencing and the clearance of rats. Both projects have consolidated the cultural identity and wellbeing of the local communities, reduced the vulnerability of those communities to flood, drought and erosion, and they have kick-started an extraordinary resurgence of biodiversity.

Perhaps we have reached the point where conservation and ecological restoration can contribute to both improving the lives of communities and contributing to planetary scale challenges. The science is clear and the extraordinary metaphor of Gaia adds urgency and romance to the need for action. Yet we need the networked institutions who will champion the agents of a good Anthropocene, the innovative communities working to regenerate the cogs of Gaia, life.