By Simon Sharpe for The Rapid Transition Alliance

The most outstanding successes of decarbonisation policy have come from targeted investment policies, including subsidies, cheap finance & public procurement, writes Simon Sharpe in this @RapidTransition blog, building on findings from the latest EEIST report. 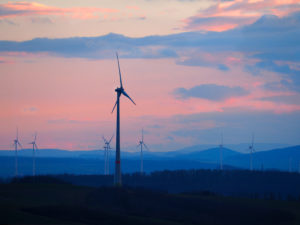 The finance sector has the means, and the scientists have the data, to
model interventions with much greater impact than we see today, explain
Federated Hermes’ Eoin Murray, and Tim Lenton from the Global Systems
Institute.

Of President-elect Joe Biden’s many campaign commitments to address
the climate crisis, the most significant is the United States re-joining the
Paris climate agreement. Climate change is a global issue and requires
an international response, and American leadership is critical to success.
Biden’s win may therefore come to be seen as a tipping point in the
history of action on climate change.

Tipping points are normally used in climate science to describe small
changes in the earth system that result in much broader, often damaging
impacts that accelerate climate change. Well-known examples including
sea level rise resulting from the disintegration of the Greenland and West
Antarctica ice sheets, or the release into the atmosphere of
climatewarming methane deposits from thawing Siberian permafrost.

For many years, researching and understanding these tipping points
underlined the urgency of climate action. Today it is widely understood
that we need to decarbonise the economy, and to do this rapidly. Right
now, we need tipping points in the other direction – small interventions
that accelerate large-scale reductions in greenhouse gas emissions.

We have already witnessed many of these positive tipping points and
have learned much about how they function. So far, it is the
governments who have produced the most effective ones. Section 172
of the UK’s updated Company Act, for example, requires businesses to
disclose material risks from the long-term impacts of their activities on
the environment. An escalating tax on carbon emissions has brought
about a collapse in coal’s share of the UK power mix, from 40 per cent
to just three per cent in six years. These policy interventions are
important, but we cannot regulate our way out of the climate emergency.
Unregulated positive tipping points are also necessary.

The transformation of the power sector is taking place due to the
economics of technological innovation. The first tipping point arrived
when renewable energy started producing electricity more cheaply in
some places than fossil fuel-burning power plants. The next will come
when the costs of building new wind or solar capacity become cheaper
than a new coal or gas plant. The entire power sector will have tipped
towards full decarbonisation when the cost of new renewable power
becomes cheaper than maintaining existing hydrocarbon power plants.

Tipping points can also occur with changes in people’s behaviours. The
trend towards plant-based diets in the food sector is one example, or the
collapse in demand for air travel that could potentially outlast coronavirus
travel restrictions. Changes in public opinion however can be much more
difficult to orchestrate than policy or economic interventions.

This is why the finance sector is critical to action on climate change.
Since capital touches every facet of economic decision-making, from
project finance to portfolio allocation, the quickest route to success is the
greening of money.

More and more shareholders recognise their role in shaping these public
goals. They actively engage with management on corporate climate
strategies. Institutional investors, who have a responsibility to mitigate
systemic climate risk, increasingly back climate-related shareholder
resolutions. One pension fund was mandated by the courts to consider
climate risks in its investment strategy. It responded by setting a net-zero
target for financed emissions by 2050.

But are these really tipping points? Could the finance sector deliver more
for climate action? If bankers and fund managers knew where and when
to invest to tip the low-carbon disruptors businesses towards exponential
growth, then finance could have a key role in accelerating climate action.

Understanding these tipping points, and engaging with companies to
capitalise on them, would bring outsized returns to both shareholders
and citizens.

The reality of day-to-day business may prove more challenging to predict
than the future of the climate. But the finance sector has the means, and
the scientists have the data, to model interventions with much greater
impact than we see today. Given the limited time available to stop
climate change, we must all work together to prioritise these new
models.

Eoin Murray is Head of Investment at Federated Hermes International,
and Professor Tim Lenton is Director of the Global Systems Institute at
the University of Exeter

The University of Exeter works closely with the Met Office to tackle key challenges in weather and climate prediction as part of an in-depth Met Office Academic Partnership. Read more about our joint intiatives here.

The University of Exeter’s IDSAI, and Global Systems Institute are working with TIST to quantify and understand TIST’s impacts at landscape scales and on multiple sustainable development goals. Read about the project in Rudy Arthur’s blog.