Danielle Hipkins, Associate Professor of Italian and Film Studies, talks about a recent short film made to promote the study of Italian, her research project on cinema-going in Italy of the 1950s, and a forthcoming event at the Bill Douglas Cinema Museum offering local people the opportunity to share their memories of cinema-going…..

To ‘Choose Italian’ is not an option for many students at school. In fact approximately two thirds of undergraduates studying Italian language and culture study ab initio at university. With this in mind, colleagues in the national Society for Italian Studies recently employed the organization Key Pictures (www.keypictures.org) to make a promotional film about the experience of studying Italian at University. The film is designed for use across the UK and Ireland on Open Days, and for teachers of Modern Languages in secondary schools to show prospective students what it might mean to ‘choose Italian’. We made a call for undergraduates and postgraduates happy to participate and were overwhelmed with positive stories of their experience of taking Italian Studies at University and then out into the workplace. The film includes a range of stories from a student teaching English just outside Naples, to one on a work placement for the Slow Food movement in the North of Italy, to those now working in banking and industry, demonstrating both the fun and the excellent long-term employability skills that a language degree can provide (insert link to video?). Key Pictures are currently developing more films about a range of language options open to students who may not have studied, say, Portuguese or Mandarin at school.

We are hardly the first to make an appealing film about Italy! Indeed the close relationship between the filmic image and Italy famously lured Hollywood to Rome in the 1950s to create ‘Hollywood on the Tiber’. It is perhaps less well-known that it was one of the Hollywood films made in that era, Roman Holiday (William Wyler, 1953), which gave even some Italians a first vision of their own capital city. If Italy is famous for its role in Hollywood, as well as its own great stars and directors, we know less about the role of cinema in the lives of the majority of Italians. They actually dedicated up to 70% of their leisure expenditure on cinema-going in that period. For that reason, together with colleagues from Oxford Brookes and Bristol, I am involved in the ‘Italian Cinema Audiences’ project, which recently launched its own website. The aim of the project is to gather memories of Italians over 65 in order to understand more about the role of cinema-going in the 1940s and 1950s. So far we have analysed data from over 1000 questionnaires and are now working on the 160 video interviews. Our research is helping us to build a much clearer picture of what it meant to go to the cinema in Italy of the 1940s and 1950s. 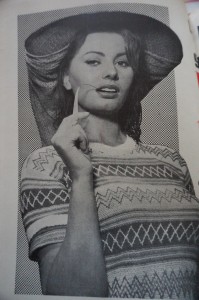 In line with much research into cinema-going memories, our research confirms the centrality of the cinema as a space. Respondents remember clearly the names and exact locations of their favourite cinemas, what they ate there, who they went there with, and even in remoter areas the fact that it was a good place to keep warm. The cinema was the place where many Italians made their friends, bonded with family, met their husbands and wives and forged their dreams about the future. Stars played a big role in those dreams of course, and often offered a window onto a different world, particularly in the case of Hollywood, and women in particular could imagine different ways of being in the world. As a woman of 73 from the Florence region writes on Betty Grable, Ginger Rogers, and Syd Charisse: ‘all these young and talented artists represented freedom, because never, ever, in their films, were there mothers or families in the way, who could stop them dating, and this made me dream (vainly) and go mad with joy, for my future as a girl!!!’.

We might imagine the effect of seeing Marilyn Monroe from a small rural province of Sardinia, as one 80 year-old remembers: ‘for a small-town girl she was the embodiment of everything I wanted to be’. If Hollywood stars certainly matter a lot in our audience memories, from Gregory Peck to Elizabeth Taylor, it is the home-grown stars like Sophia Loren (photo) and Amedeo Nazzari (photo) who top their list of favourites. Not many people outside of Italy have heard of Amedeo Nazzari but his selection confirms the importance to Italian memory of Italy’s own popular cinema, not just Neorealism or the great auteur films, but the melodramas like Chains (Matarazzo, 1949) or Nobody’s Children (1951), often dismissed by film critics of the time. If these films did not often make it onto the international circuit, the detail with which respondents remember dramatic scenes from these films as ‘real and moving’ can tell us much about their own understanding about the relationship between Italy of that time and cinema. 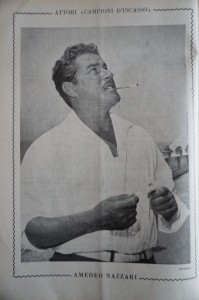 We have always hoped that our research would address an important gap in the history of Italian cinema, by taking that history back to the people who watched it. We were lucky enough to have direct experience of that recently when we went to the South of Italy to talk to the University of the Third Age in Potenza about our findings to date (photo). One participant told us after our presentation: ‘I have re-lived some beautiful moments from my youth’. The warm response and further detail we received there was a helpful reminder that this is a project that will evolve through the very process of sharing our findings.

With a forthcoming event here in Exeter at the Bill Douglas Cinema Museum, we hope to extend that even further by inviting colleagues working on a project on UK cinema audiences of the 1960s and members of the general public to join us in talking over some of the ways in which cinema-going of the 1940s, 50s and 60s is remembered across our two cultures. We will also be thinking about what some of those films that Italians most often remember, from Gone with the Wind to Bicycle Thieves, meant to British audiences (Saturday 13th June, 2-5pm, Bill Douglas Cinema Museum, tea and coffee provided, all welcome, please contact for more information). There will also be a screening of Bicycle Thieves (De Sica, 1948) on Monday 15th June at the Exeter Picturehouse, 6.30pm.

Danielle Hipkins, Associate Professor of Italian and Film Studies started teaching Italian language and culture upon graduation from Oxford in 1996, working as a Graduate Teaching Assistant at the University of Warwick whilst studying for a PhD on contemporary Italian Women Writers until 2000. In 2001 she took up her first lecturing post at the University of Leeds, where she worked until joining Exeter in 2006.