Self-promotion, standing out from the crowd, and developing a good reputation are said to be key to climbing the academic ladder. One way of standing out is by doing something unconventional or daring. Here Sarah Foxen describes three situations in which she has taken risks as a junior academic. For each she discusses the dangers involved and illustrates why it paid off to take the risks.

I was bricking it right up to the moment I heard the first reactions to my audacious behaviour. As soon as the room erupted, though, I knew taking the risk had paid off. 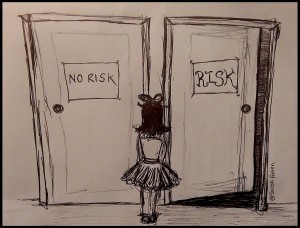 Have you ever found yourself thinking, “oh, I’d love to XYZ, but I’m not sure I’m daring enough?” About a year ago I was invited to lead a discussion seminar at Cardiff University. In advance, one of the conveners emailed me with the instructions: “you’re welcome to use any format you wish…”

What would you do faced with that information?

Amazing I thought to myself, for once I don’t have to prepare a standard PowerPoint-And-Paper-Combo; I can do something different! But what?

I’d been asked to talk about my first experiences of ethnographic fieldwork, and I felt like I had a story to tell. Hmm; a story. One idea sprung to mind, but it seemed a bit outrageous. It was logical but was so far removed from the PP-A-P-Combo. I grappled with it for a few days then decided I’d take the risk.

Fast forward to that cold, grey Wednesday afternoon. People start filing in. It’s not my institution, so I’ve really got no idea who anyone is: that chap coming in with the stripy jumper, for example, could be a PhD student or lecturer or dean of faculty.

Everyone is finally installed: It’s showtime.Thump, thump, thump: I can hear and feel my heartbeat. Why did I ever think this would be a good idea? No going back. I begin:

“Hi everyone, for those of you who don’t know me, I’m Sarah, and for today’s discussion I’ve drawn a cartoon…” 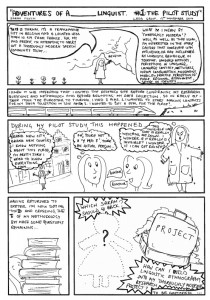 Like I said, as soon as the group reacted I knew the risk had been worth it. Just because we are scholars and are used to traditional forms of delivery doesn’t mean they’re the only ones we should use. I’m so glad I didn’t play it safe, because five awesome things happened as a result:

Maybe cartoon drawing isn’t your thing, but I bet this next risky situation is one that has been – or could be – on the cards for many of you: the interdisciplinary conference.

An opportunity recently arose for me to submit an abstract for an interdisciplinary conference. I thought to myself: Interdisciplinary? Hmm, risky: I’d be out of my comfort zone, I might look stupid. Though that probably is the worst thing that could happen.

But lets be rational: it’s interdisciplinary; everyone will be a bit out of their comfort zone. People sort of expect you not to be an expert.

And what about the best thing that could happen? It’s interdisciplinary: people will have very different research backgrounds to mine; they could give me really great input and insight.So shall I take the risk? Yes.

And so what happened on the day?

Well, I went to the conference and ‘confessed’ to my audience that I wasn’t an expert and that I wanted to learn from them. Then this happened:

Now finally, some reflections about the biggest risk I think I’ve taken, and a risk I imagine at least some of you have contemplated: tweeting data, results or research as an expert.

Last summer an article appeared oni100 listing the top ten baby names for boys and girls.  Something linguistically interesting appeared to be going on. So I did some basic data analysis and visualisation.

The patterns that emerged were fascinating (we have a gendered alphabet: boys names favour consonant letters and sounds, whilst for girls it’s vowels). The thing is, the patterns were so striking, I wanted to share what I’d spotted with the wider world.

But there was a problem. I’m a PhD linguistics student: I’m supposed to be (becoming) an expert. What if I’d miscalculated something or made an error? Putting my calculations into the public domain felt quite risky. But the data was astonishing. So what did I do? I checked my calculations a zillion times, scrunched up my eyes and clicked tweet.

In came the likes and the retweets. I was beaming; others had found the linguistic patterns equally fascinating.I was loving seeing the retweets, then suddenly I got a notification of a reply: someone had said I’d got it wrong; I’d done my vowel analysis wrong.

What you have to know is that my PhD is all about vowels.

I looked again at the data; I was sure I hadn’t made a mistake.

And then salvation came: another linguist pointed out that I’d analysed the data with a British accent in mind and, since it was British data, I hadn’t made a mistake. They supposed my accuser had had an American accent in mind, which would explain their confusion.

So what did I learn? Well, it was a high risk, but, because I went for it:

Sarah Foxen is a postgraduate researcher in French Linguistics. Her research investigates the interactions between language and identity in the Franco-Belgian borderland. She is also interested in trends and developments in academia, and blogs about researcher skills, research and impact from the perspective of a junior academic.

This piece originally appeared on the author’s personal blog and is reposted with permission.