As part of my current AHRC project Reframing the Graphic Novel I have curated an exhibition with the Cartoon Museum in London called The Great British Graphic Novel. It tells the story of the graphic novel in the UK since the eighteenth century, with an emphasis on the last 40 years. There are all kinds of displays: cabinets of books, video interviews, and old comics, but the main attraction is original art. Over 125 pages of original art. The exhibition runs until 24 July, so you have roughly a month left to visit – and here are 7 ½ reasons why you should:

1. … to see a giant tube map of UK graphic novels 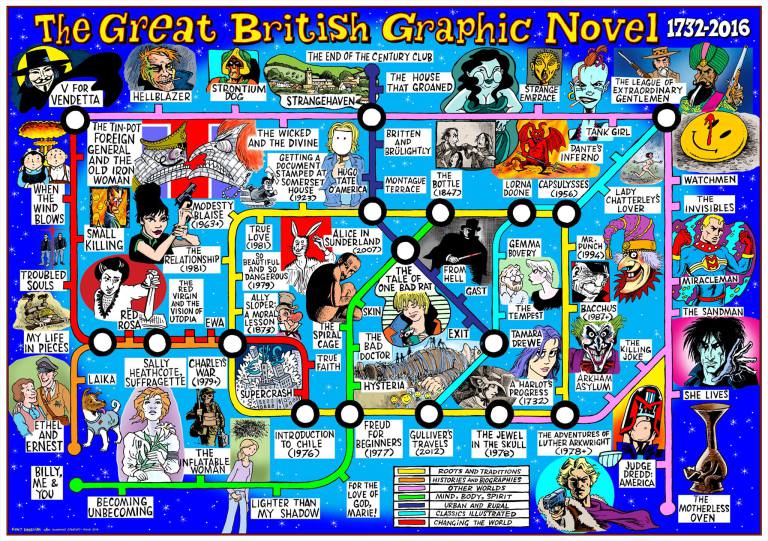 How could we show the history of graphic novels – and all the different types of graphic novel – and provide visitors with a way of navigating the different parts of the exhibition? We decided to visualise the graphic novels on display as stations on a map of the London Underground, where the lines represent the exhibition’s sections. The whole idea was brought to life as a spectacular image drawn by veteran underground comix artist Hunt Emerson. As you can see, he’s added characters and symbols from the graphic novels themselves. And if you think it looks good on a computer screen, the first thing that greets you when you walk into the main gallery is a giant version of Emerson’s map!

2. … to attend an amazing talk

We’ve had some great events tied in with the exhibition. Since we opened:

And there’s more to come:

3. … because some of the art on display is HUGE

Size matters, right? Well, the multimedia art of Dave McKean is enormous and spectacular. One of the graphic novels McKean famously worked on was The Sandman, written by Neil Gaiman. McKean’s covers gave the series a distinct look that set it apart from other comics on the rack and in the exhibition you can see that McKean didn’t just draw the covers, he constructed them as large-scale, three-dimensional art objects that absorbed mementoes and found objects. 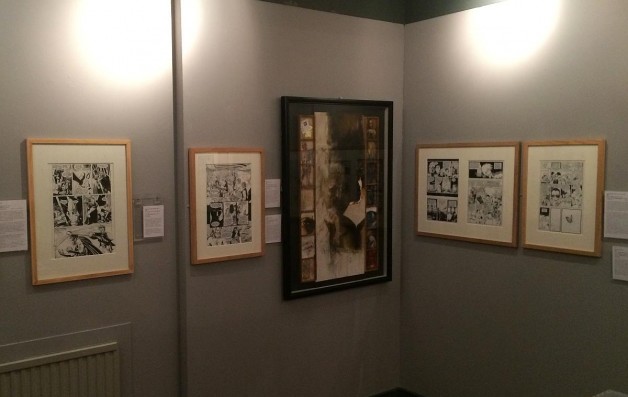 Another gigantic exhibit in the show is Woodrow Phoenix’s She Lives! This is a one-off graphic novel. We’re displaying the book that Phoenix made by hand because there is no published version. Not many people would have room in their homes for it! There is only one copy in the world and it’s on show in The Great British Graphic Novel. 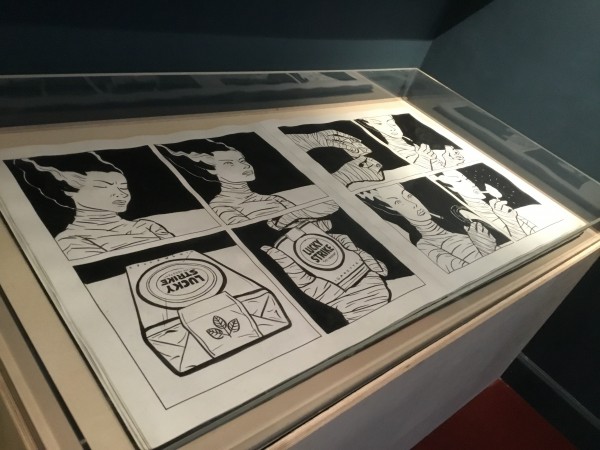 And while you can’t turn the pages yourself, you can (a) come to one of the page-turnings and have Woodrow Phoenix take you through the story himself, or (b) the pages can be viewed on the video screen next to the book.

4. …because you never knew graphic novels went back that far

My research is about the history of graphic novels and the opening section of the exhibition shows how comics have grown in length, been published as books, and been read by adults (all things associated with the graphic novel format) over the last 300 years. To reflect the influence of engraver William Hogarth on later artists, the exhibition starts with some prints from Hogarth’s sequence of images A Harlot’s Progress (1732). Contemporary creators are not only influenced by the history of illustration, they appropriate and rework artistic traditions, and Eddie Campbell’s Bacchus is a great example of this. In the 1980s and 1990s Campbell depicted the present-day exploits of Bacchus, the Greek god of wine and revelry, and in one scene (shown in the exhibition) Bacchus is chased by Mr. Dry (a character based on Prohibition-era political cartoons) through a mini-history of alcohol-related paintings, starting with Hogarth’s Beer Street (1751).

5. …to learn how graphic novels get put together

One of the pleasures of curating the exhibition was illuminating how the country’s leading artists go about producing their graphic novels. Some of the draft work on show includes character designs and page layouts (sketches that outline where panels will go on a page and what goes in each one). Visitors can see the lengths Hunt Emerson went to in his adaptation of Inferno, drawing his own map of the underworld to help him recreate the events in Dante’s original. You can also see how artists like Katie Green work with computers as well as pencils and ink. All of this, we hope, will inspire visitors old and young to pick up different tools and have a go at making comics for themselves!

6. …to see the classics of the future before they’re even published

At the end of the exhibition we’ve spotlighted three works by Kate Charlesworth, Asia Alfasi, and Jade Sarson which are still in progress but are shaping up to be classics of the future. The work of Alfasi and Sarson demonstrates the influence of Japanese comics on British graphic novelists (elsewhere in the exhibition, the art from the Manga Shakespeare series is another example of this). Jade Sarson’s book For the Love of God, Marie! is forthcoming as I write this but it will be published by the time The Great British Graphic Novel closes.

7. …to marvel at page after page of your old favourites

It’s edifying to spend years putting an exhibition like this together and for people to enjoy it. We haven’t been able to show art from every British graphic novel ever published, but what we’ve included has received some very positive reviews. If you’re already a passionate reader of graphic novels and are expecting to see your personal favourites, the chances are you won’t be disappointed. There’s art on show from Posy Simmonds’s Gemma Bovery and Tamara Drewe, The Sandman by Neil Gaiman and various artists, Alan Martin and Jamie Hewlett’s Tank Girl, Bryan Talbot’s Alice in Sunderland, and Grant Morrison and Dave McKean’s Arkham Asylum. Alan Moore is one of the most written-about comics writers of all time and we have pages of art from five of his graphic novels: From Hell (art by Eddie Campbell), Watchmen (Dave Gibbons), V for Vendetta (David Lloyd), A Small Killing (Oscar Zarate) and League of Extraordinary Gentlemen (Kev O’Neill). 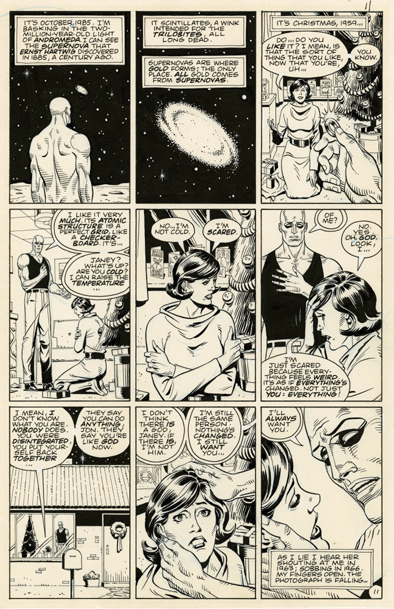 7 ½.…because there’s lots to do when you (eventually) finish looking round the exhibition

The Cartoon Museum is one street down from the British Museum and located perfectly to explore Bloomsbury, or to do some shopping on Oxford Street, or to see a show in the West End. So although you’ll obviously come to look at the comics, you won’t have any difficulty finding other things to do when the Museum closes …

Dr Paul Williams is a Senior Lecturer in the Department of English in the College of Humanities at the University of Exeter. He is currently researching how comics became graphic novels in the long 1970s. This project is funded by an AHRC Early Career Research Fellowship (2014-16) and you can read more about it on his blog.