In 1853, the blacksmith Joshua Payge of Buckland Brewer, Devon, married Ann Cole. He arrived for his wedding in his best waistcoat, a garment made from Manchester cotton velvet – swirls of blue patterning over a deep red ground.  From its style and manufacture we are able to date the waistcoat back to the 1830s, and might deduce from this fact that it had been handed down to Joshua by his father.  The enamel buttons down the front are a later, joyful addition: tiny flowers of red, white and blue enamel.  From such customization, from the stains and the stitching we are able to turn the waistcoat from an item of clothing to a record that provides us with clues as to what it means to be human.

Coat Tales: The Stories Clothes Tell was a collaborative workshop designed to explore objects such as this and to consider the kinds of stories they tell. It was run by Shelley Tobin, assistant curator of Dress and Textiles at RAMM, Dr Tricia Zakreski, lecturer in Victorian Studies, Heather Hind, postgraduate student in Exeter’s English department, and me, Jane Feaver, lecturer in Creative Writing.  We share a fascination for objects – whether from a historical-practical, a literary-aesthetic, or a fictional-creative point of view – and wanted to investigate the synergies and ramifications in bringing those three enthusiasms together.

Between us we had identified three items from the museum holdings, which we’d selected for their resonance in terms of key moments in a life: Payne’s wedding waistcoat, an eighteenth-century pair of baby’s linen mittens worn by the donor’s “dear father” on his christening day, and a Victorian mourning necklace woven from the hair of the donor’s mother, and worn with a cross as testament to her memory. 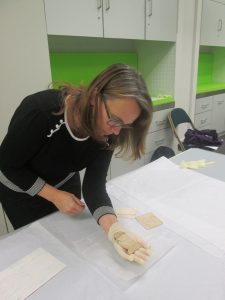 Our event was split into three parts. The first part was led by Shelley, who gave the workshop participants a practical, fashion-curator’s view of the objects in hand, which we were able to see and experience at close quarters.  What questions do we ask of an object? How is it constructed? What does this tell us about the date it was made, the sort of person who would have worn it, the way the item was worn? What stories do particular stains or other features of wearing tell? Armed with pencils and notebooks participants were encouraged to take down their observations, which included drawing particular details of the item – stitching, pattern, texture…

The next part of our workshop aimed to give body and life to these objects – all of which, at over 150 years old, might have appeared a little arcane.  We wanted to show how they moved and operated ordinarily in the world.  Thomas Hardy, Charles Dickens, George Egerton, Emily Bronte and Wilkie Collins supplied wonderful examples for us: We found a blacksmith in Joe Gargery, dressed to the nines on his wedding day to Biddy; a maid’s revelation to her pregnant mistress of the baby clothes she treasures in a red-painted deal box; a letter from Wilkie Collins’ Hide and Seek, which details the making of a hair bracelet. How does our understanding of the objects change? How does our impression of the text alter, having embraced the physical presence of similar objects?

The last part of the workshop involved us thinking about any of the three objects as cues to writing our own stories.  Using the letter in Hide and Seek as a model, participants were asked to write a letter to an intimate friend describing their chosen object, and thinking about what function the object played in the scene they are about to relate, and what emotion drove the relating… In ten minutes, there was not a sound in the room but the industrious beavering of pencil leads.  Everyone managed a story – some, pages of story! – and as we read around the room, each story exposed some moment in a human life suffuse with the emotion that arises from close attention to detail at such life-changing moments – birth, marriage, death; how the memory of one moment often lies buried in another.

The workshop was an experiment.  The participants, we were clear from the start, were our lab rats.  They didn’t appear to mind.  Someone said out loud how helpful it had been to have this three-pronged approach: that by the time it came to writing for themselves, how much easier it made the task.  Each of us during the course of that afternoon, I think, learned something more about what it means to be human: why we value and invest in certain things, how we use particular objects to embody our memories and our stories, and, conversely, how we can get objects not personally connected to us to offer up their novel stories to us.

Dr Jane Feaver is a Lecturer in Creative Writing at the University of Exeter.