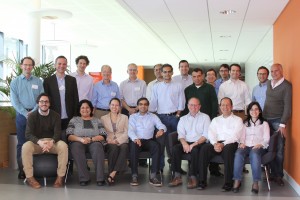 The main program comprised of 12 contributions on how institutional variation, particularly between developed and developing countries, affects the pattern of trade and the economics of conflict and corruption. Although the papers differed in approach, they all emphasized how different institutional settings can affect the performance of firms, their ability to export, and the overall welfare of nations. In more extreme contexts a dysfunctional set of institutions can lead to corruption, conflict and the dissolution of states.

The papers that Kala Krishna, Emanuel Ornelas and Chrysostomos Tabakis presented built on the idea that exporting is a costly activity, which involves uncertainty about technology and consumer preferences. On one hand this uncertainty is strongly influenced by the state’s capacity to enforce contracts. On the other hand firms can enjoy an advantage in relation to their national rivals when they establish ties with government officials in order to obtain favorable policies. The paper that Tobias Seidel presented showed that financial institutions also matter to the growth of exports and in particular how access to credit markets can determine whether or not firms tend to cluster.

In the context of multilateral trade agreements, Mostafa Beshkar and Rick Bond showed that a country’s market power affects tariff overhang; how close a country’s applied tariff rate is to its bound rate. The larger a country, or the greater its market power, the smaller the difference because greater market power increases the incentive to act opportunistically. Kamal Saggi showed that when the agreement is over intellectual property protection as in the WTO’s TRIPs agreement, as opposed to tariffs, larger countries actually have less incentive to act opportunistically because their firms absorb a larger share of the innovation externality. Michele Ruta’s paper focused on the various provisions introduced in deeper preferential trade agreements and argued that these can influence firms’ decisions about foreign direct investment and the internationalization of their production.

Finally there was a focus on how institutional change can come about, or how it can be forestalled using trade policy. Toke Aidt provided evidence that, in countries under authoritarian rule, the threat of a revolution can be averted by the preemptive introduction of democracy by the ruling elite. Ben Zissimos argued that democratization might be forestalled using trade policy. In countries where states completely fail to protect property rights and the rule of law we tend to observe prolonged violent conflict as discussed by Tom Zylkin. Chris Ellis argued that a high degree of ethnic fractionalization in a country leads the diverse ethnic groups to have divergent preferences over public good provision.  This generates conflict that can ultimately lead to the dissolution of the country.

Link to the event site and papers