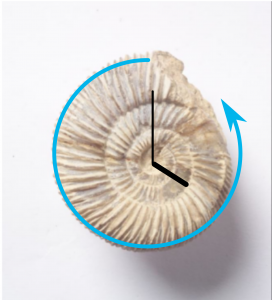 Imagine a time machine that could transport us 200 Million years into the past. The supercontinent Pangaea was slowly breaking up, and newly formed tectonic plates were drifting apart. Animals and plants were just recovering from a big extinction event at the boundary between the Triassic and Jurassic time periods. Many amphibian species and other living organisms had died out and new species, including many dinosaurs were evolving and spreading.

How did these lifeforms evolve, and how did changes in the environment influence their evolution? Why was the environment changing? How did volcanic eruptions and small variations in the orbits of the planets in our solar system interact to cause changes in the Earth’s atmosphere and oceans? What can we learn about current changes in environment and climate by understanding these past variations? A time machine could help us answer these questions, and it turns out we have one in the rocks beneath our feet! 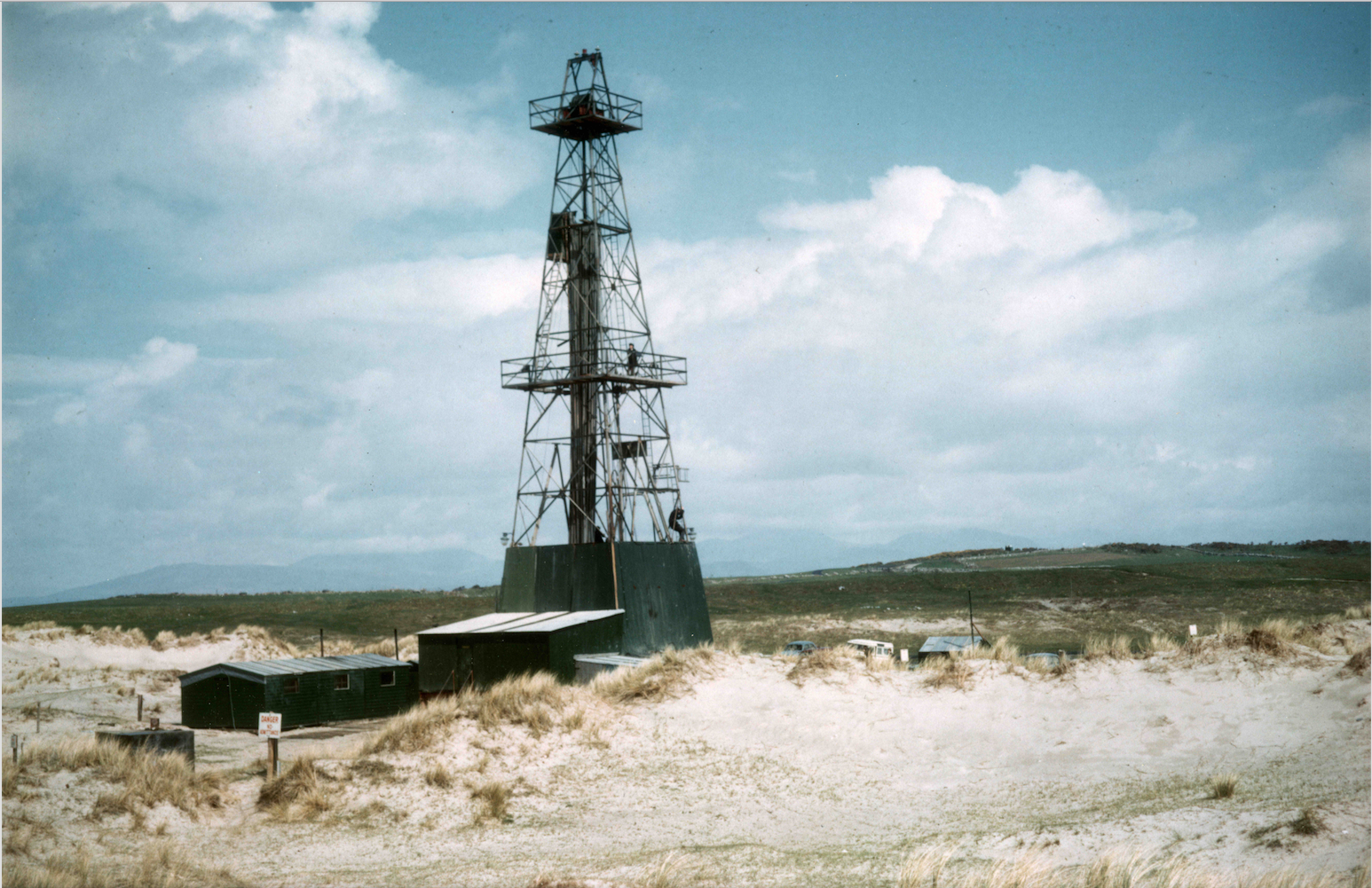 The drilling rig in the sand dunes on the Mochras Farm site in the late 1960s.

To use this time machine, we need to drill down through the Earth to reach rocks that were deposited during the Triassic-Jurassic. And scientists did just this on Mochras Farm (Shell Island) near Harlech, Wales, in the late 1960s. They discovered a surprisingly thick section of rocks from the Early Jurassic epoch, between 174 – 201 Million years ago. At that time, the continents as we know them today were in very different positions, and so were the rocks recovered from the borehole.

Map: This map shows where the rocks from the UK, including our new drill site at Prees, would have been during the Early Jurassic. The white areas are parts of the supercontinent Pangaea, which was slowly breaking up. The black lines on top outline the continents as we know them today, and their relative positions at the time. Adapted from Dera et al. (2009), Earth & Planetary Science Letters.

These rocks are our time machine because, by studying them, scientists are able to learn about the environment at that time. Scientists can also compare what they find from different locations to give them a wider view of what the climate and environment was like over a larger area, such as all of Europe. 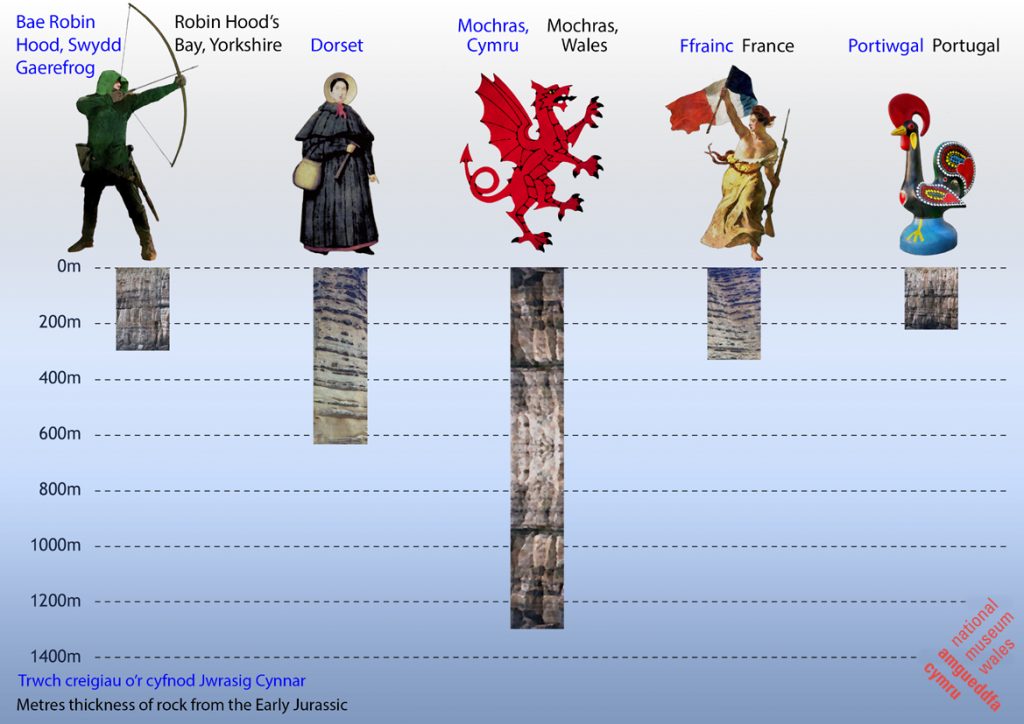 This diagram shows the thickness of rock core from the Early Jurassic recovered at different locations within the UK and Europe.

However, some boreholes have better time machines for different periods than others. And this is where we come in! JET is short for “Early Jurassic Earth System and Timescale”. It is a research project funded by NERC (UK Natural Environment Research Council) and the ICDP (International Continental Scientific Drilling Program). Thanks to the funding agencies and the expertise of our science team, we are going to do two things: (1) reanalyse and complete studies from lots of different drill holes in the UK, and (2) drill a new hole at Prees in the Cheshire Basin (Shropshire, England).

We study the rocks in many different ways. We can assess the rock type, which can tell us about the environment in which these rocks were formed. For example, many of the rocks in the previous drill hole were so-called mudstones, which were laid down in a part of the ocean that existed in this area at the time of the Early Jurassic. But this is only the first step! Fossil pollen and other plant material can tell us about the type of plants that existed in the region, which helps to learn more about the climate. Bodies (or parts) of marine animals that died fell to the sea floor, were preserved and can now be found as fossils, so we can study their shapes and the chemical composition of their shells or bones. That way we can learn details about, for example, the water temperature or sea level in the past. 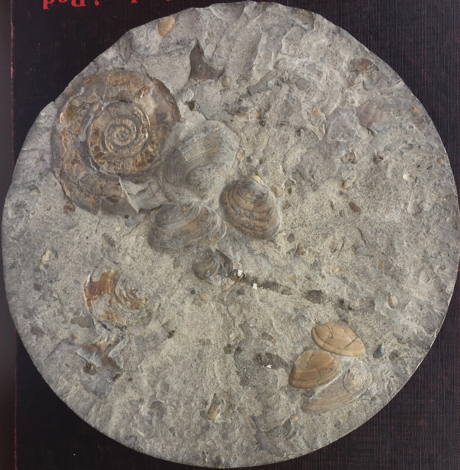 Fossils present in a drill core from the Cheshire Basin.

If a fossil is found higher up in the rock sequence that usually means it is from a slightly more recent time compared to a fossil found further down, so we can even assess variations in climate or ocean conditions within the Early Jurassic epoch. 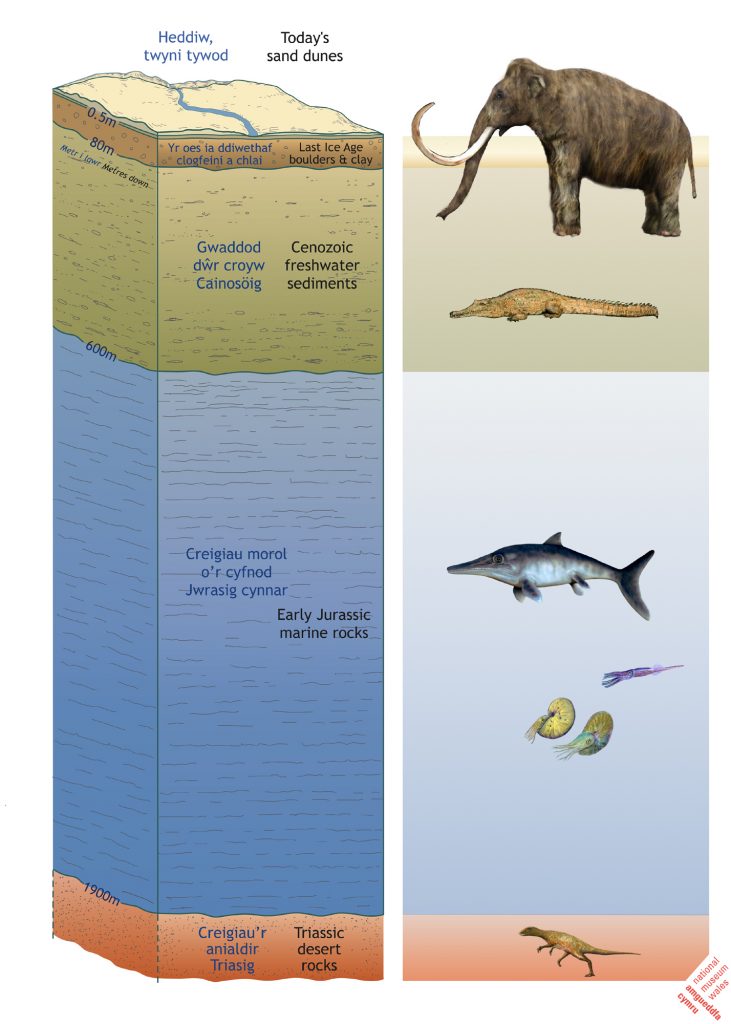 The left side of this cartoon shows the thickness of the different rock intervals below the surface at the Mochras Farm site, including the type of rock and the time period during which they were formed. On the right, there are some illustrations of lifeforms that lived at the time and whose traces (for example, parts of bones or shells) we might see.

Updates about the project, drilling process and examples of our analyses can be found in the Latest News section.

Also check out the mini-documentaries below by ICDP about similar projects. At Lake Malawi and Lake Petén Itzá, scientists drilled lake sediments to study the climate between now and around 100,000 years ago (so a bit closer to today than the Jurassic!):