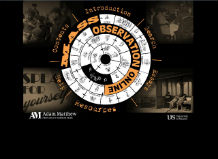 Mass Observation Online provides access to one of the most important archives for the study of social history in the modern era. From the end of the ‘Hungry Thirties’ to the onset of the Second World War, the Blitz and the post-War world of consumerism and television, Mass Observation Online captures the daily lives, hopes and expectations of British society and beyond during the mid-20th century. This resource would particularly appeal to anyone studying History, Literature, Sociology, Anthropology or Political Science.

File Reports, 1937-1972 – a complete set of over 2,000 full-text searchable documents, providing summaries of the findings of Mass Observation studies on an immense range of subjects, from cinema-going, fashion, radio and music to sex, marriage, politics and more.

Topic Collections, 1937–1965 – represent the ‘raw materials’ behind many of Mass Observation’s published studies and include questionnaires, interviews and observations as well as contemporary ephemera on subjects ranging from reading, holidays, dreams, gambling, and smoking habits to sexual behaviour, propaganda, capital punishment and the Korean War.

The ‘Worktown Collection’ – the first study of ‘working class’ Britain ever undertaken, focusing on the cities of Bolton and Blackpool between 1937 and 1940. Includes a wide selection of photographs by Humphrey Spender.

Diaries – the most intimate and detailed records of the day-to-day lives of respondents during and immediately after World War II.

The Day Surveys, 1937-1938 – written by Mass Observation’s National Panel of over 500 observers, these diaries record the events of a single day.

Directives, 1939-1955 – responses to wide-ranging questions on topics such as race, class, religion, politics, the atomic bomb and World War II.

Mass Observation Online is accessible via the library catalogue and the Electronic Library.

Our Facebook competition for April features a question on Mass Observation Online. Enter at https://www.facebook.com/UoELibrary and be in with the chance of winning a £20 Blackwell’s gift card.