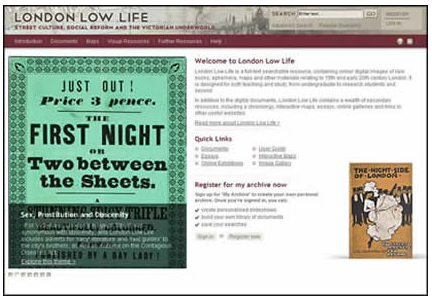 From salacious ‘swell’s guides’ to scandalous broadsides and subversive posters, the material sold and exchanged on London’s bustling thoroughfares offers an unparalleled insight into the dark underworld of the city. Children’s chapbooks, street cries, slang dictionaries and ballads were all part of a vibrant culture of street literature.

This is also an incredible visual resource for students and scholars of London, with many full colour maps, cartoons, sketches and a full set of the essential Tallis’ Street Views of London – a unique resource for the study of London architecture and commerce.

This interactive mapping enables users to overlay Victorian cartography over a modern, searchable base map and: