Home » Events » Writing a Biography of William the Conqueror: Lessons of Past and Present

Writing a Biography of William the Conqueror: Lessons of Past and Present

When, at the start of the presentation of my new William the Conqueror, in the Yale University Press English Monarchs series, to the University of Exeter on Wednesday 16 November, Levi Roach asked how long I had 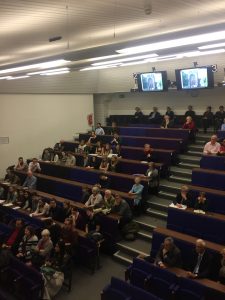 been writing the book, I was tempted to answer that it has taken both fifty years and three years to write. The reason for the first date is that I decided, while still a postgraduate student at Exeter between 1966 and 1969 supervised by Professor Frank Barlow, that the book I eventually replaced in the English Monarchs series, David Douglas’s William the Conqueror, had not fully exploited the sources available in France and in due course set out to do something about it. The second is explained by a conversation in 2013 with Robert Baldock, who formally commissioned my William in 2000, that convinced me that I had to confront directly the changes in the writing of history that have taken place since the 1960s and the ethical problems of writing about William, a man responsible for huge historical changes and the loss of many lives and much misery.

It is a source of great personal delight that my presentation of William to the University of Exeter was placed within the dual framework of modern issues related to student employability and of a research seminar. The presence at the event of people with memories of the 1960s and of current undergraduates and postgraduates was exactly what it required. In contrasting the apparent informality of teaching and learning in the 1960s with the structured present, with its Student Satisfaction Surveys, I used my career, which has 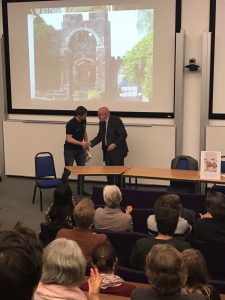 involved national responsibilities for the way in which history is studied, to argue that attitudes on all sides must be challenging and fair-minded. I deployed a comment by Frank Barlow that I was ‘fearless’ to suggest that the essentials of my student experience were that I was made to feel part of serious intellectual discourse and, during my postgraduate years, a full member of the historical profession. For all the changes that have taken place since then, Exeter was a fine university – as it is now. In choosing to present the book to the University, I was recognising this. Frank Barlow, to whom the book is dedicated, was very important, as were many others. I deliberately paid tribute to my undergraduate tutor Bertram Woolfe and to George Greenway. The decision to present my book to a current undergraduate, thereby looking to the future of History at Exeter, felt like an appropriate – indeed beautiful – way to acknowledge the long-term achievements of many colleagues and students, alongside the responsibilities that we all bear.

With Frank involved in writing Edward the Confessor when I was a postgraduate and David Douglas’s William so recently published, I almost feel as if I am an intellectual child of the English Monarchs series. It is also striking how large a part the writing of historical biography has played in the publications of Exeter historians, with Levi Roach’s Æthelred the Unready being only the latest in a distinguished series. I made some remarks about how much the pervasiveness of cultural history and the use by medieval historians of models derived from anthropology have made biography all the more relevant; it is only by examining the

lives of individual and communities that we can explore norms, scripts, and rules, quite apart from the debates around the complexities of such Spielregeln. When it comes to the specific arguments and contents of the book, I provocatively remarked that the long-term historiography can seem stale and complacent. Why is it, for example, that the story of William’s prostration before Archbishop Ealdred of York, the man who crowned him king of the English, was scarcely discussed at all by historians writing in the twentieth century? This situation has thankfully been rectified in a distinguished book by Sarah Hamilton. I then turned to the so-called ‘facts’ of William’s life, alluding briefly to numerous revisions and reinterpretations that I have suggested. These include the significance of William’s so-called ‘bastardy’, the certainty based on a neglected charter that the future King Harold and Guy, count of Ponthieu, knew each when, so the Bayeux Tapestry suggests, Guy seized Harold upon his landing in France. And so on. And so on.

William the Conqueror’s life matters for historians as much as it has always done. It was controversial for his contemporaries and the sources need to be read with this in mind. I concluded by reflecting on the necessity of examining closely the levels of violence that were permitted as part of the mechanics of rule in the medieval West. The results I think would be shocking to many. And then to suggest that England’s and Britain’s histories and the crisis of 1066 can only be fully understood in the context of a history of their relations with Europe from around 900 to around 1300. 1066 is an important moment in this history, not a dividing-line. With the cross-Channel empire created in 1066, and which endured until 1204, in mind, it is irresistible not to ask the rhetorical and counter-factual question of whether we would have Magna Carta if Harold had won the Battle of Hastings. Please discuss further!

I am grateful to Exeter colleagues for organising a deeply moving event that will remain in my mind for the rest of my life. I wish them all well now and in the future.

← Exeter’s Hotel Fire and Historians: A Different Kind of Impact Stay Silent or be Damned! Modern Portrayals of the Medieval Cleric →