Home » Reviews » Rendering unto Caesar…: Tithes and Lordship in the Middle Ages

Rendering unto Caesar…: Tithes and Lordship in the Middle Ages

The following is a review of John Eldevik’s Episcopal Power and Ecclesiastical Reform in the German Empire (CUP, 2012). It was originally produced for an online review platform; but, since it never appeared, it is now ‘published’ here in lightly revised format.

One of the most fraught issues in the study of the Middle Ages is the timing, nature and causes of the changes which encompassed western Europe between the early and central Middle Ages. These irrevocably altered the face of European society, with effects that are felt to the present day. Robert Bartlett speaks in this connection of the ‘making of Europe’ and R. I. Moore writes of a ‘first European revolution’, the greatest socio-economic transformation between the Fall of Rome and Industrial Revolution. Yet despite the obvious significance of these developments, there is little agreement as to their timing, scale or causes.

John Eldevik’s book is therefore to be welcomed. It engages intelligently with old debates fro 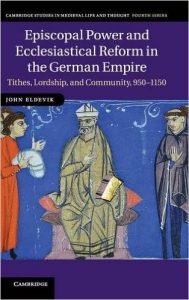 m a new angle: that of the humble church tithe. The tithe derives from Near Eastern traditions of dedicating a tenth (or similar portion) of produce and income to religious activities. It figures prominently in the Hebrew Scriptures and came to influence Graeco-Roman traditions of religious charity; it was also a Christian custom from earliest times, though it only became a formal requirement over the course of the early Middle Ages. As part of this process, tithes were placed under the oversight of bishops, and it is this which makes them such a useful way into debates about social and religious change: since tithes were an essential source of wealth and authority for prelates, they can tell us much about their practices of lordship and patronage.

The bulk of the book is made up of three case studies of episcopal tithe rights between 950 and 1150. The bishoprics chosen span the Empire: Lucca in Tuscany, with its rich private charter material; Mainz in Franconia, with its detailed narrative accounts; and Salzburg in Bavaria (as it was then), with its own well-preserved documentary records. The picture that emerges is one of substantial but subtle change in the mid- to late eleventh century. Before this time, tithes were prized for their socio-economic and symbolic value, which derived in no small part from the bonds created by their lease and exchange. Yet as we move into the second half of the eleventh century, such transactions are increasingly frowned upon. This change played out differently in each region. In Lucca, Bishop Teudgrim granted away a large proportion of tithes in 983, in the sort of action which later reformers would roundly criticize. As Eldevik notes, however, this act stood in a long tradition, and probably represents a last-ditch attempt to secure the position of the bishop in the face of local challenges from the cathedral chapter and city. That such actions were no so ill-advised as one might imagine is suggested by later developments; though attitudes towards the granting of tithes as livelli –  a kind of temporary lease popular in Italy – changed, they did so gradually, and little effort was made to regain earlier rights. In Salzburg, on the other hand, tithes were regularly exchanged, but as time wore on bishops sought to assert greater control over these transactions. A key moment came in the episcopate of Gebhard (1060–88), who as an outsider to the local political scene needed to rely more heavily upon traditional episcopal prerogatives than his forbears. Still, as at Lucca, change was gradual and earlier grants were seldom overturned. At Mainz, on the other hand, developments more neatly fit the traditional narrative of church reform. Here Archbishop Siegfried’s attempts to reclaim tithes in Thuringia look like a textbook imposition of reformist demands for the restoration of lost rights; yet, as Eldevik notes, the bishop’s efforts were as informed by immediate territorial and political considerations as by religious ideals.

It is thus clear that something changed between 950 and 1150, but this cannot be explained in terms of reform alone (at least as traditionally conceptualized). Indeed, Eldevik is acutely aware of the danger of taking reforming rhetoric at face value; as he points out, reformers not only misrepresented previous tithe arrangements, but frequently concealed their own motives for doing so. Yet this is not to say that reform has nothing to do with developments. Local practices of holding, granting and leasing tithes were influenced by prevailing conceptions of episcopal office; and as these developed, this inevitably had a knock-on effect. Still, since tithes were deeply embedded in local networks of patronage, the manner in which reforming ideals were implemented (if at all) was shaped by local considerations. In a sense, therefore, the

key lesson of Eldevik’s study – as indeed much recent literature on the subject – is that similar changes can be traced in multiple regions without resorting to external ‘reform’ as the sole explanation. In fact, in none of these cases were developments spearheaded by the pope, and they largely pre-date the heyday of ‘Gregorian’ reform. More important than reform may have been attitudes towards lordship. Here Eldevik draws parallels here between his findings and those of Thomas Bisson, who sees the eleventh century as a period of sudden and abrupt change in patterns and practices of lordship.

Eldevik’s refusal to present a simple model of change is both refreshing and frustrating; it avoids reducing the complexity of the phenomena he examines, but risks leaving the reader (or at least this reader!) wondering what it was that actually drove such developments. By asserting that changes in episcopal tithes should be understood as part of broader shifts in patterns of lordship, Eldevik may well be on the right track – but he also in a sense dodges the question. If the eleventh century does indeed see the development of a new

kind of territorial lordship à la Bisson (suggested tentatively at p. 259), then why was this so? Are we seeing the long arm of monastic reform (a possibility mooted at pp. 266–7), or are we witnessing longer-term developments out of the Carolingian era, as Charles West might argue? There is clearly much work to be done here! Though Eldevik may not have explained these changes, he elegantly demonstrates that any attempt to do so will need to take tithes seriously – and that alone is no mean accomplishment!

← Anarchy in the UK? Mediterranean Saints in Early Medieval Rome →