By Catherine Rosemary Rider in Events, Reviews on 25th Jul, 2017.

Last week I went to the annual summer conference of the Ecclesiastical History Society, which was held here in Exeter.  This year’s theme was Churches and Education, and it attracted a large turnout from scholars working on all periods, from the early church to the twentieth and twenty-first centuries.   The president of the EHS this year is Exeter’s own Morwenna Ludlow from the department of Theology and Religion, and Morwenna gave a plenary lecture relating to her own area of specialism.  This lecture, given jointly with Sophie Lunn-Rockliffe (Cambridge) focused on what early Christian writers in the Latin and Greek traditions said about the pleasures of Bible study – a fitting opening to an academic conference. 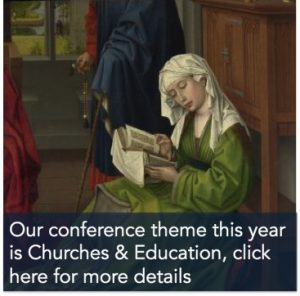 Three other Exeter medievalists also gave papers: history PhD student Des Atkinson, talking about the education of the fifteenth-century archbishop of Canterbury John Morton and his contemporaries; theology research fellow Hajnalka Tamas, talking about a fourth-century theological controversy relating to the teaching of a layman, Heraclianus; and me, talking about the medieval church and education relating to pregnancy.  As ever, the EHS offered an interested, sympathetic and knowledgeable audience.  It is a good place for PhD students and early career scholars, in particular, to offer papers.  The audiences offer helpful feedback and the proceedings, published as Studies in Church History, offer an early publication opportunity for many scholars; indeed, one of my first papers was published there, back in 2006.

Overall there were fewer papers on late antiquity and the Middle Ages than at some of the other EHS conferences I’ve attended.  Perhaps for some reason (despite the attractive medieval image on the call for papers) the theme appealed particularly to specialists on the nineteenth and twentieth centuries.  It is also possible that the Leeds conference, held two weeks before, is providing ever more competition for medievalists’ time, as well as their conference budgets. Nevertheless there were a number of interesting papers on medieval subjects: on Bede, on hagiography, on Pope Gregory VII, and on twelfth-century pastoral care, among other topics.  There were also papers on other periods which dealt with questions and topics relevant to medievalists:  I particularly enjoyed a plenary lecture on the role of (early modern) convents in educating girls.

Next year’s conference is on the Church and Law, and will be held in Cambridge, so I’d recommend medievalists take a look!