As an undergraduate, I spent quite a lot of time in and around Emmanuel College, Cambridge. One of my best friends was a student there, and in the spirit of putting inter-collegiate rivalries aside, we visited each other fairly frequently.

A not-insignificant portion of my undergraduate dissertation was written, as was his, in the throes of ‘writing sprints’ in his room, fuelled by gallons of tea and the constant reminder that the College canteen did excellent desserts. One place I barely set foot in, though, was the College library; as a member of another College, I wasn’t really supposed to be there anyway, and even the most cursory of tours felt somewhat transgressive.

It was something of a surprise, then, when I realised that I’d need to go back to ‘Emma’ in the course of my PhD research. At the moment, I’m investigating the tradition of so-called ‘courtesy books’ produced in Anglo-Norman, and specifically the text known as Urbain le courtois. Urbain survives in 11 manuscripts, ranging from the sumptuous and meticulously-produced to the altogether-less-impressive (such as MS Douce 210), but only nine of them have been edited. By the standards of many medieval texts, such comprehensive coverage would warrant a pat on the back and a sense of pride at a job well done, but in the case of Urbain, the fact that two manuscripts remain excluded from discussion becomes something of a problem. These two additional manuscripts – one of which, as you will probably have guessed by now, is at Emmanuel College – remind us that medieval manuscripts can often be characterised by what Bernard Cerquiglini has termed variance. Urbain is effectively a compilation of fairly pithy advice on how to behave at court – kneel before your superiors, don’t drink to excess, and so on – but the order in which an individual scribe presents his material, as well as the decisions that are made regarding what to include and what to leave out, can tell us a great deal about how the didactic process was imagined in Anglo-Norman texts. The two manuscripts that remain unedited could, I thought, offer valuable clues for unpicking the relationships between the various witnesses to the text of Urbain, and with this in mind, I realised that investigating the manuscript held by Emmanuel College in person would be an essential step in looking to understand the textual history of this peculiar piece.

For any manuscript to have survived to the present day is a remarkable achievement, and one that can be largely put down to the tireless work of the many Special Collections departments up and down the country. As custodians of works that are hundreds of years old, manuscript libraries are well within their rights to set their own rules about who can access their collections, and what you’re allowed to do with them during your visit. The rules at Emma are fairly standard for smaller libraries: no liquids or pens were to be brought into the room, and I was to be supervised by a member of staff at all times while consulting the manuscript. I was also asked to provide a letter of introduction, signed by my supervisor (and, in a charming throwback to an age before email, printed on University-headed paper). The only surprise came when I was told photography would not be permitted, a policy which many larger collections are increasingly relaxing in the age of ubiquitous smartphone cameras.

Before consulting any manuscript, it’s a good idea to look up its entry in the catalogue to get a sense of its layout and contents. Many medieval manuscripts, in spite of containing multiple texts, didn’t come equipped with contents pages in the way that we might expect today, and so the catalogue, whether it’s a fully searchable web database, a dusty print volume, or somewhere in between, plays a vital role in telling you where to look for the item that you’re after. In my case, the catalogue as I consulted it was an intriguing mix of the old-school and the modern, taking the form of a digital scan of the 1903 paper ‘handlist’, freely available through the wonderful Internet Archive. There are, of course, many things that a catalogue, print or otherwise, cannot help you to expect, and one of these was the remarkable dimensions of the manuscript. My eyes having somehow managed to skip over the small note on the size of the manuscript, I walked into Emma’s Special Collections reading room expecting to meet a book of similar dimensions to MS Douce 210: approximately A4 size, or possibly slightly smaller. What I didn’t expect was to be handed a book that could sit comfortably in one hand, measuring just 11cm by 7cm, into which the scribe had somehow managed to cram up to 200 words on each individual page.

This was my first time investigating a manuscript without having the luxury of a photo to fall back on later, and I have to confess that this constraint led me to interact with the manuscript in a surprisingly different way. My main task was the same as it often is when consulting manuscript versions of texts – transcribe its contents for comparison with other manuscript witnesses – but this time, I found myself transcribing in a much more conservative manner. Abbreviations were left unexpanded: for now, the question of whether qe .referred to q[e] or to q[ue] would have to wait, as I sought to record as much information as possible, as accurately as possible. In short, I realised, I was trying to create a photograph without actually taking my phone out of my pocket. This kind of ‘slow photography’, however, was in its way more useful, and more engaging, than any 5000 x 3000-pixel JPEG ever could be: correction and every decoration, I was engaging with the manuscript in a much closer fashion, treating it as far more than just a repository of folia containing potential image data. It took me approximately 90 minutes to fully transcribe two and a half folios out of the approximately 200 that make up the manuscript, and in that time I found myself realising just how intricate, and how time-consuming, the medieval scribal process could have been. 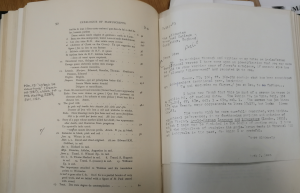 There was, however, one more task for me to complete before MS 106 was returned to its box. One curiosity of Emma’s library is its own copy of the catalogue: readers consulting Special Collections are invited to leave their mark on this unique copy, which is printed with blank leaves in between each standard page in order to allow space for readers to add notes. These usually take the form of publication announcements, with pencilled-in additions indicating that (say) item no. 36 from a given manuscript has recently been published in the 2009 edition of a major medieval studies journal. Occasionally, however, a more personal story would emerge, and as I added my own note to the catalogue, one of these presented itself to me. While I was clarifying the contents of item no. 13 in MS 106, I came across a letter on the opposite page from a certain Ruth J. Dean, informing the Librarian that she has discovered details of the context to one of the pieces in this very same manuscript. More information would be available, she noted, ‘in my forthcoming revision and updating of John Vising’s Anglo-Norman Lannguage and Literature, which I hope may be finished in the course of another year.” If the letter can be dated, as the top-left indicates, to 1983, then Ruth Dean’s optimism about the speed with which her work could be finished was somewhat misplaced, with Anglo-Norman Literature: A Guide to Texts and Manuscripts not being published until 1999. Nevertheless, it was a great pleasure for me, as someone who uses Dean’s life-work on an almost daily basis, to add my own reference to Emmanuel’s catalogue using a numbering system that she herself devised.

Thanks to Dr. H. C. Carron at the Library of Emmanuel College, Cambridge for allowing me to consult MS 106, and to all of the Library staff for their warm welcome and willingness to answer my innumerable questions.