By Catherine Rosemary Rider in Events, News on 9th Jan, 2019. 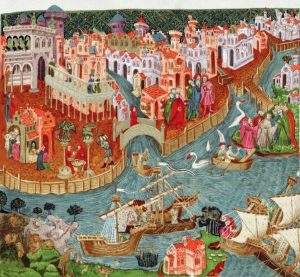 Exeter will be hosting the Fifteenth Century Conference this September, an annual conference for anyone with interests in the Fifteenth Century. This has come about mainly because of the hard work of PhD student Des Atkinson, assisted by me, James Clark, Eddie Jones and our Hon Research Fellow Jonathan Hughes.  The theme will be ‘England and Mainland Europe in the Fifteenth Century’, which we’re interpreting very broadly to include a range of topics and disciplines.  I’ve posted the call for papers below. If you have fifteenth-century interest please consider sending in an abstract, and please also draw other people’s attention to it.

England and mainland Europe in the fifteenth century

Poggio Bracciolini, the Tuscan Papal Secretary, after meeting Henry Beaufort at the Council of Constance, followed the bishop of Winchester to England to serve as his Latin secretary between 1419 and February 1423. Poggio was critical of the English climate and the preoccupation of English bishops with politics at the expense of learning, and during this period he offered the following assessment of this country in a letter to the Florentine humanist Niccolo de Niccoli:

‘I began travelling with my lord; but there was no great pleasure in the travelling, since I could find no books. Monasteries here are very rich but of new foundation; they have been built no more than four hundred years ago. If older ones survive they have no secular books, but are full of the most recent works of the doctors of the church and especially the ecclesiastics. I also saw carefully compiled inventories in which there was nothing of worth of humanist studies. And nothing interesting indeed.’

Poggio’s dismissal of English intellectual culture points to a wide range of interactions between fifteenth-century England and its neighbours in continental Europe, and it raises many questions that have interested scholars in recent years. What was the nature of interaction between England and continental Europe? What kinds of exchange (political, economic, cultural) took place, when, and how? What was the role of courts, cities, and the Church, as well as individuals, in this process?  How was England perceived elsewhere in Europe, and how did the English perceive Europe and the wider world in their turn?  How did cultural and intellectual exchange with continental Europe interact with the growing body of vernacular writing, in many genres, being produced in England, and with local and national senses of identity?

At a time when this country’s relationship with Europe is once again uncertain it seems appropriate to use Poggio’s comments to host a conference that considers this same question during another period of doubt and transition. This conference aims to address, however broadly, the different ways in which the late medieval kingdom of England could be considered in religious, political, social, economic and cultural terms as either a part of Europe, or apart from Europe – a nation with a separate identity.

This year’s Fifteenth Century Conference will be hosted by the University of Exeter, which is home to a community of late medievalists across several disciplines. We welcome papers from scholars at all career stages from PhD students to established academics, on any theme connected to this subject, from any discipline working on the fifteenth century.  This may include, but is not limited to, papers on local, national and European identities and myths; cultural exchange; the transmission of knowledge (including vernacular culture); political, social and intellectual networks; trade; the Church; heresy; social unrest; travel and perceptions of the wider world.

Please submit abstracts of up to 200 words, and a short biography, to Professor Catherine Rider (Director, Centre for Medieval Studies, University of Exeter) at c.r.rider@exeter.ac.uk by 28th February 2019.