In conversation with… Alice Taylor, Part I: Scottish Identity, Intermarriage, and “Revolts”

Last month, students on the Special Subject module ‘The Celtic Frontier: Post-Conquest England and her Celtic Neighbours’ were given the opportunity to interview Dr Alice Taylor, an expert on medieval Scotland and author of The Shape of the State in Medieval Scotland, 1124-1290 (Oxford, 2016). The students’ questions focused on the long twelfth century and ranged from Scottish identity and culture to elite politics. After 50 minutes (!!) of grilling, we finally let Alice go…

This blog post and the next provide the highlights of our discussion. They are must-reads for students working on Scotland in the twelfth century – we are very grateful to Alice for both her time and her full responses!

The session was chaired by Dr Stuart Pracy with students on the module posing the questions. We begin with a question from Damien Welham.

DW: I’ve got a question on Scottish identity… It’s quite broad, but how did the coming of Anglo-Normans shift what it meant to be Scottish? And what would you say were the main problems that they caused?

Alice Taylor: Goodness, Damien, that’s a big question! So the question ‘how does elite settlement into Scotland over the twelfth century change political culture’ is, basically, the question that has preoccupied historians of medieval Scotland for about 200 years – and there have been many different ideas about it.

Now, there have been a number of people who have been working since the 1950s who are like, ‘hold on a second!’ Because what’s happened over the last 70 years is, essentially, a kind of cultural limitation of the effects of Anglo-Norman settlement. A lot has been done in terms of reframing. What’s the biggest shift in the geopolitics of north Britain? Rather than Anglo-Norman settlement, it’s the shift of the kingdom of Alba from north of the Forth to south of the Forth.

So, in a way, the big transition is the eleventh-century shift in the centre of power of the Scottish kingdom and Scottish kings to being within the area now called Lothian. That’s the area that contains Edinburgh, Roxburgh and (then) Berwick – kind of urban settlements. The incorporation of Lothian as the centre of Scottish kingship is a more profound shift for the geopolitics of Scotland because, if you think about it, if your centre is in the north, then who are you most interested in? Essentially, Norway and Denmark – not the kingdom of England! Whereas what happens in the late eleventh century is you’ve got a new dynasty, which is situating itself as being the rightful kings of England, in a way, and looking much more to the south as the primary area of diplomatic engagement. And so the settlement of the Anglo-Normans needs to be seen in that context, which is a cultural shift seen in the kings of Scots themselves. So you can absolutely see big changes because you have the replacement of an elite! But those big changes need to be seen in the context of a much broader shift that is being led by kings, rather than being led against kings, if that makes sense.

DW: Thank you very much! This week I’ve read quite a lot about this Forth divide and that I found that quite interesting.

AT: It is! It is really interesting because it’s also this idea of the symbolic power of Scotland north of the Forth. There’s this extraordinary source called On the Location of Alba which was written in the late twelfth century and talks about the symbolic division of the kingdom of the Scots into seven – and the earliest division is the area north of the Forth. So there’s the question of whether or not the south is Scottish… At this point, the monks of Melrose, an abbey in the modern Scottish borders, are still writing about themselves as though the Scots are other people. They only start seeing themselves as being part of the kingdom in the thirteenth century – Dauvit Broun has written about this.

We always like to complicate things as historians, but even talking about Scotland is a kind of later imposition on what is actually a much more complicated polity that these elites are entering. And they’re thinking ‘well, this is very different from my fief in Shropshire’… Which it is! If you were Walter FitzAlan and you were given Ayrshire you might have been like ‘my lordship in Shropshire has not really prepared me for this…’ That would be how I would certainly feel if I were him!

Stuart Pracy: I’ve been to both Scotland and Shropshire and they are very different – so I will back you up on that! It’s definitely different.

AT: And it’s different strategies of lordship. That also puts a very different spin on the idea of intermarriage. You know the imperative, the need to intermarry, because what you’re marrying into is knowledge. What does it mean to be an Anglo-Norman lord in Angus? It’s very, very different from Sussex. And the kinds of social relationships that you’re entering into… marriage is a really, really useful tool for that.

SP: Hanife, it looks like you have a question you want to ask that follows on from this.

Hanife Hursit: Yes, my question was actually in relation to intermarriage, and I’m interested in the role that women played. Unfortunately, I’ve not been able to find much information on it, I guess because it’s the medieval period. But my question was going to be on the importance of intermarriage in Scottish politics and the wider role that women played – and your take on that.

AT: It’s a really interesting question – and in some ways the example of Scotland only highlights some of the issues that we have looking at the twelfth century in particular. Most of the evidence from medieval Scotland in this period survives from charters. You might have been introduced to the People of Medieval Scotland database (POMS), which contains information about all the people who are mentioned in the Scottish charter corpus. And it’s both a funny and sad fact that for about 200 years there are more people in that database called William than there are women! The materials that we have to study even just aristocratic women are based on what we can garner from charters, because there’s not much in the way of a chronicle tradition in this period…

‘It’s both a funny and sad fact that for about 200 years there are more people in that database called William than there are women!’

We know that there are hugely powerful heiresses, women who exercise vast amounts of power and authority, particularly in the west, and who we know are acting as these key nodes of lordly patronage and lordly networks – but we don’t really know anything more than that. We also know that there are large numbers of intermarriages not just through the existing Gaelic-speaking aristocracy but also, for want of a better word, Anglo-Norman women who are marrying major mormaers (regional rulers). We also know a lot about women’s patronage, what they give land to. But it is very, very difficult to look at the political role of women here because there’s just not a lot of twelfth-century evidence, even though we know intermarriage is the way in which these incoming lords must have embedded themselves.

So, an example is my totes fave Eschina, lord of Mow in Roxburghshire, who sometimes calls herself Eschina of London – and she is somebody whose marriage patterns you can actually track! Eschina of Mow/London marries Walter FitzAlan, her first husband, and it’s also possible that she is related to the mother of William the Lion’s high-profile illegitimate son Robert of London. Her marriage alliances are, essentially, ways in which she starts exercising firstly, her power over southern Scotland through her marriage to Walter FitzAlan and, secondly, embeds herself in that south-easterly lordship of Roxburgh, which is the richest area of the kingdom at this time. But you have to do that work yourself… That’s the annoying thing about studying aristocratic women in Scotland – and that’s where POMS is really helpful. So you can type in Eschina’s name into POMS and immediately you get all the known information about her. She’s somebody who doesn’t appear in chronicles and we wouldn’t know anything about her were it not for charters. But it is very clear that in the second half of the twelfth century she is this key node that allows for a lot of other people to gain status through her. I’d say Matthew Hammond is probably the best person to read on women in the adoption of charters. I don’t know if that answers your question!

SP: It’s a very, very thorough answer and I think it covered everything and more, didn’t it?! Do we have another question?

Evan Shingles: My question’s on Scottish royal relationships with the kings of Man and the Isles. I wanted to know how the Scottish kings related to them in the twelfth century: was it always hostile? Was it sometimes positive?

AT: It’s a really interesting question – and the short answer is a bit of both. Incursions from the west start early in the reign of Mael Coluim IV, when he’s young and everyone hates him. There’s been a way of writing until very, very recently (possibly spurred on by devolution) that considers these incursions overwhelmingly in national terms. So anything that looked like an incursion against royal authority would be written as a ‘rebellion’, for example, you’ve got a ‘rebellion in Moray’. It’s the idea that somehow these Scottish kings have natural authority and anything that is against them is understood in the words of rebellion. The last of this tradition is probably Andrew McDonald’s Outlaws of Medieval Scotland, where you are looking at people who are “revolting” and then writing about them as though they are rebels.

And Somerled is very interesting because Alex Woolf has written a really nice piece about a text called the Song of the Death of Somerled. He has this beautiful reading where he basically rewrites the entire history of these incursions from the west in the reign of Mael Coluim and reframes them by saying these aren’t incursions, these aren’t rebellions, these aren’t attacks. This is actually a large diplomatic alliance, which has different people leading at different points and which Somerled is part of. It’s a different option that’s going on in Alba, i.e. Scotland north of the Forth, basically in direct opposition to the kingship of Mael Coluim. So when we’re looking at these relationships it’s sometimes hard to find literature that actually speaks about them in the way that they should be spoken about. Richard Oram in his Domination and Lordship book writes about the reign of Mael Coluim IV very well here, based on the work of the late Alasdair Ross. But that’s very, very recent – that’s in the last 10 years! 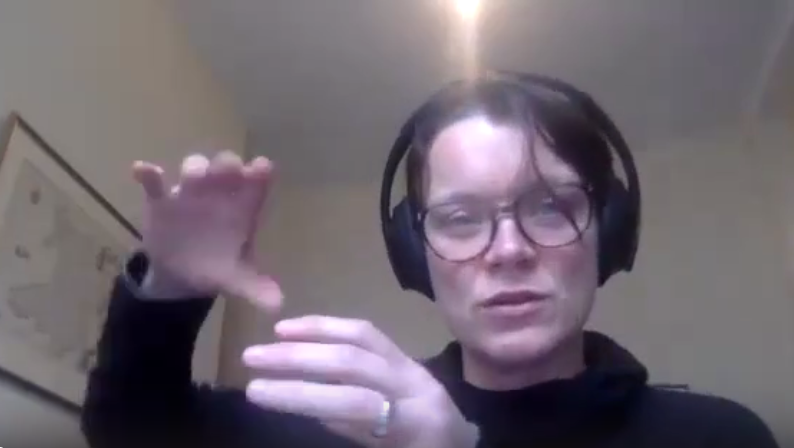 And so when we’re thinking about the relationships with the kings of Man and the kings of the Isles, it’s very, very important to see them as being part of a diplomatic alliance in which the authority and legitimacy of kingship is not secure. There are other options, there are other ways of thinking about Scottish kingship, particularly in that middle period of the twelfth century. You could be looking at a very, very different kind of polity which just essentially leaves southern Scotland and Northumberland to the remnants of Mael Coluim III and Margaret’s dynasty, and actually sees a much broader-based alliance between what’s now central and eastern Scotland and the west…

See our next blog post for ‘Part II: “Culture Wars”, the State, and Overlordship in Twelfth-Century Scotland’

← Podcast on the Albigensian Crusade In conversation with… Alice Taylor, Part II: “Culture Wars”, the State, and Overlordship in Twelfth-Century Scotland →