Appropriately – given that it was Halloween – I spent part of reading week in the archives researching the history of magic.  Dr Alex Mallett (formerly of Exeter, now based in Leiden) and I were doing some of the final research for an AHRC-funded project led by Professor Dionisius Agius, Institute of Arab and Islamic Studies on ‘Magic in Malta, 1605: Sellem bin al-Sheikh Mansur and the Roman Inquisition’ (see here for more details).  I’ve written about this project on the blog before, when we were at a much earlier stage.  To recap, it studies the case of Sellem, a Muslim slave who was accused of offering a variety of magical services to Christians.  The case gives us a fascinating insight into many magical beliefs, Christian-Muslim relations, and many other aspects of life in early modern Malta and, with the help of a team of other British, Maltese and French scholars, we’ll be exploring these in the book we’re producing as the main outcome of the project.

Alex and I were researching in the Cathedral Archive in Mdina, which holds the inquisition records and, once again, gave us a friendly welcome.

Now we’re in the finishing stages of the project the kind of research we were undertaking was rather different from what I described back in 2014 when the project team first visited Malta together.  Then we were searching for other references to Sellem in the archives, as well as exploring some of the other magic cases in the records for comparative material and planning the project’s Malta-based public engagement activities.  This time, it was more a case of satisfying ourselves that we hadn’t missed anything crucial: making sure we really had checked all the files for the early years of the seventeenth century; tracking down some last supporting documents; finalising the last tricky bits of translation from Latin and Italian; and checking references.

It was also a good chance to catch up with some of the Maltese scholars who had contributed their expertise to the project.  Just in case you might be tempted to think it was all work, there were also project meetings involving excellent Maltese cakes.

The visit to the archive – my first in 2 ½ years – also reminded me how much interesting material it contains for a scholar who, like me, is interested in magic and particularly in popular magical beliefs and how the Church tried to categorize and discourage them.  Even though the seventeenth century is rather later than my usual area of expertise, I will definitely try to go back!

It brings me great pleasure to announce that the Arts and Humanities Research Council has seen fit to fund my new project, ‘Forging Memory: Falsified Documents and Institutional History in Europe, c. 970–1020’. This aims to place forgeries at the heart of our understanding of the growth and development of historical consciousness at a key period in European history. Starting from the the deceptively simple observation that the later tenth century is the first time when the forging of documents can be attested across the Latin-speaking West, it seeks to investigate what this meant on the ground.

Medievalists have, of course, long known that falsified documents can be just as interesting as the real 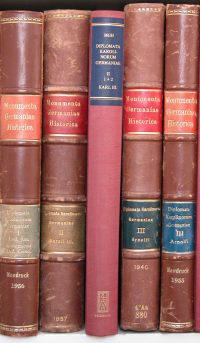 thing. Nevertheless, forgeries continue to receive less attention than their authentic counterparts. In part, this is a matter of inertia. Particularly when using older editions, it is all too easy to slip into the tendency of ignoring those marked up as ‘forged’ (conveniently relegated at the back of the volume, in the case of the older Monumenta Germaniae Historica editions). More to the point, perhaps, forgeries often lack context. Whereas we know a fair bit about where and when most authentic documents were produced, it is difficult to ascertain the same for forgeries – documents which by their nature seek to hide their true origins. Studying them therefore requires a great deal of contextual knowledge about the forger and his (or her) aims, a fact which has discouraged synthesis and generalization.

Still, when we can date and localize forgeries, they offer a wealth of information. Precisely because forgers were not constrained by the realities of their day, these documents tell us much about their hopes, dreams and ambitions; they were the blank canvases onto which the monks and clerics of the Middle Ages projected their ‘ought world’ (to use Karl Leyser’s memorable turn of phrase). In this respect, we are lucky to have a number of closely datable forgery complexes from the later tenth century. Five of these will form the basis of my investigation, which will result in a book-length study: the counterfeit diplomas and papal bulls of Pilgrim of Passau (970s); the Worms forgeries, associated with Bishop Hildibald (980s); the purported papal privileges of Abbo of Fleury (990s); the Orthodoxorum charters, concocted under the auspices of Abbot Wulfgar (mid- to later 990s); and the forged and authentic diplomas associated with Leo of Vercelli (late 990s).

The intention is to use these case studies as a springboard to consider broader themes of memory and institutional identity in these years. They have been selected in order to give maximum geographical 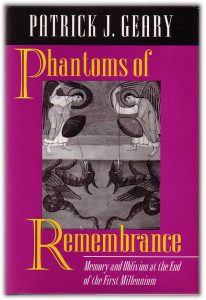 range within a tightly defined period; they have also been selected to give a balance of monastic houses (Fleury, Abingdon) and cathedral chapters (Passau, Worms, Vercelli). Each forgery complex is unique; and I hope to give due weight to the specific as well as the general. By examining a range of cases, however, I also hope to avoid getting lost in the detail. The interest of these documents lies in the fact that each act of forgery was not simply one of wishful thinking (though it was often this too); it involved a creative engagement with the past, the formulation of an alternative history of the religious house in question. By examining this phenomenon at the turn of the first millennium – a period identified by Patrick Geary as a decisive one where attitudes to the past are concerned – the study will add depth to our understanding of these developments.

In pragmatic terms, the project will run 21 months (effectively two years), with the first nine of these spent on archival research. Thereafter, the focus will be on writing up and disseminating findings, with a strong public outreach element. During this time, I will organize panels on the subject at a number of international conferences. The project will be then capped off with a public exhibition at the local cathedral in Exeter, which boasts its own fascinating collection of forgeries of the mid-eleventh century. This will be complemented by an end-of-project conference here at Exeter on ‘Forgery and Memory between the Middle Ages and Modernity’. Anyone interested in getting involved is strongly encouraged to !

Recently three academics associated with the Centre for Medieval Studies visited the Cathedral Archives in Mdina, Malta, as part of a research project on ‘Magic in Malta, 1605: the Moorish Slave Sellem Bin Al-Sheikh Mansur and the Roman Inquisition.’ The project is funded by the AHRC, and the project team are Prof. Dionisius Agius from the Institute for Arabic and Islamic Studies (principal investigator) as well as Dr Catherine Rider from History (co-investigator) and Dr Alex Mallett, project researcher. See here for more details.

The project is based on the records of the Inquisition in Malta, and it focuses on the trial of Sellem Bin Al-Sheikh Mansur, an Egyptian slave living in Valletta who was tried for practising magic in 1605. Several witnesses denounced Sellem to the Inquisition, claiming that he had done various kinds of magic for them, including healing, curing illnesses caused by witchcraft, and love magic. More unusually Sellem was also accused of more learned kinds of magic and divination. He admitted to having learned astrology in Cairo, and the inquisition also confiscated from him several divinatory texts, which he denied ever owning. After a lengthy trial involving many witnesses (some of whom were disgruntled clients), Sellem was imprisoned in the prisons of the inquisition, and this is the last we hear of him.

The trial document is a very rich source full of anecdotal details and it tells us much about everyday life in seventeenth-century Malta, including magical practices, attitudes to illness and healing, and relations between the Christian Maltese and Malta’s sizeable population of Muslim slaves. Over the next eighteen months the project team will work with the Cathedral archives publish and translate this unusual and very interesting trial record., We will also be holding a workshop in Malta with a group of British, Maltese and French academics to study various aspects of the document. As part of the project we also hope to explore the inquisition records more fully: there is a huge volume of cases and several unexpected items, including a magic hat now on display in the Inquisitor’s Palace in Birgu. It was inscribed with Arabic writing, and was apparently worn to cure headaches, and the inquisitors confiscated it from a penitent in the early eighteenth century. It is not every day that you get to see a magic hat, even when you work on the history of magic – definitely a highlight of the trip.