The Feast of Orme

Wednesday 29th March saw medievalists from across the University and the city gather for the climax of the Medieval Studies calendar in Exeter. This annual day of events, generously sponsored by Prof. Nicholas Orme, has long included both a postgraduate seminar in the afternoon and, in the evening, the public Orme Lecture. This year, however, the programme was extended by an additional talk in the morning, a change that made for a packed programme of events. The additional talk complemented the longstanding aim of the day, which allows us to showcase some of the research being undertaken by our PhD students as well as hosting a prominent visiting speaker. The ‘Feast of Orme’, as it is informally known, is always a memorable day, but the general feeling is that this year’s ‘Feast’ was particularly intellectually nourishing.

The day began with a ‘work-in-progress’ session led by Ryan Low, a Marshall Scholar studying for an MPhil in medieval history at UCL. Ryan’s unbridled enthusiasm shone through as he laid out a selection of his research questions for comment and discussion. Ryan outlined the broad aims of his project, which is centred around producing a bibliography that aims to ‘rehabilitate’ the thirteenth-century inquisitor and Dominican prior Bernard Gui. A lively discussion ensued, touching on all five ‘phases’ of Bernard’s life, while also bringing in questions of Gui’s own Occitan identity and how he would have presented himself. This ‘nerdy little kid’, as Ryan memorably described him, was to grow up to become ‘a regional actor with international clout’; in the wake of such a stimulating and thought-provoking presentation, we were all left hopeful of a similarly bright future for Ryan’s project.

After lunch, our attention turned to the day’s second set of speakers, whom we welcomed as part of the afternoon postgraduate seminar. First to present was Tabitha Stanmore, one of our AHRC DTP doctoral students who is supervised jointly by Ronald Hutton at Bristol and Catherine Rider at Exeter. Her paper examined the economics of the occult in late medieval and early modern England. Drawing on an extensive range of primary testimonies from both before and after the 1542 Witchcraft Act, she demonstrated that there existed an astonishingly developed market for the services of so-called ‘cunning-folk’, with rates of payment regulated by a complex unwritten system that took into account the value of magic to the client, as well as the perceived ‘difficulty’ of the magic to perform. The system could even account for discounts being offered to repeat customers. Clearly, as Tabitha showed in her fascinating presentation, the cloak-and-dagger world of witchcraft, with its ‘introducers’ and ‘dark corners’, was far from lawless.

Speaking next was Tom Chadwick, a final-year PhD student at Exeter. Tom based his presentation around an aspect of his thesis, inviting us to consider the polysemic and often-problematic term Normannitas. The term, coined in the nineteenth century in imitation of Romanitas, has been used since to present, as Tom aptly put it, a monolithic and deceptively uniform understanding of ‘what made the Normans Norman.’ The problem, Tom demonstrated, is that the multiple chroniclers writing in the eleventh and twelfth centuries defined Norman identity in different ways. Dudo of Saint-Quentin, for instance, attributed different levels of ferocity, belligerence, cunning and celerity to each successive Norman monarch, whereas William of Jumièges, writing a century later, declined to mention the former (ferocitas) entirely. The waters of Tom’s research were further muddied by the fact that still more chroniclers, namely William of Poitiers and the anonymous author of the Carmen de Hastingae Proelio, dispensed with any idea of the Normans possessing a distinctive ethnic identity at all and focused instead on their Frankish enemies and the figure of William the Conqueror. As Tom’s presentation skilfully showed, the perception of Norman identity across these chronicles is inconsistent, with Norman traits also being used to describe other gentes, and peripheral chronicles rejecting the notion of Normannitas entirely. Tom’s lively contribution elicited a wide range of questions from a room full of intrigued medievalists, and certainly proved that his talents for communicating research go far beyond re-enacting the Battle of Hastings and ‘getting ready to kill some Saxons‘.

Our third speaker was Ryan Kemp, another AHRC DTP student under joint supervision by Bjorn Weiler (Aberystwyth) and Sarah Hamilton (Exeter). He offered an equally intriguing reflection on part of his own PhD research: the provision of spiritual aid on the battlefield by bishops to their kings in England and Germany. In this comparison of ‘sacral landscapes’, he noted that portrayals of divine intervention described in twelfth-century English sources often required the intermediary of a bishop’s prayer to function properly. One particularly interesting example, which Ryan read with admirable fervour, is the case of Bishop Oda’s assistance to Æthelstan, as presented by Eadmer of Canterbury in his Life of St. Oda:

For while King Æthelstan was fighting, his sword shattered close to the hilt and exposed him to his enemies, as if he were defenceless… Oda stood somewhat removed from the fighting, praying to Christ with his lips and in his heart… [Oda] listened to the king and immediately responded with these words: ‘What is the problem? What is worrying you? Your blade hangs intact at your side’… At these words all those who were listening were struck with great amazement, and casting their glance towards the king they saw hanging by his side the sword which had not been there when they had looked earlier.

Lively tales such as this one are comparatively absent from the German tradition, a curious contrast that proved to be the germ of a great deal of discussion.

After a quick pause for coffee, the gaggle of excited medievalists reconvened for the day’s centrepiece: the Annual Orme Lecture. This year’s speaker was Nicolas Vincent, Professor of Medieval History at the University of East Anglia. His lecture retraced the life and the afterlife of Henry of Bracton, ‘England’s greatest medieval lawyer’. Readers with long memories may recall that Bracton has made an appearance on this blog on a previous occasion; Nicolas Vincent’s lecture, however, offered an entirely new reflection on this singular figure. Both Bracton and the book of law that bears his name have, as Prof. Vincent demonstrated, frequently been interpreted as representing a ‘quintessentially English’ strand of legal thought, with the influential Frederic William Maitland dismissing the Roman law evident in Bracton’s work as nothing more than ‘poorly-applied varnish’. By retracing the textual history of Bracton’s Treatise, however, Vincent demonstrated masterfully that Maitland’s ‘flower and crown of English jurisprudence’ was not one man’s work alone. Instead, this 500,000-word codification of English legal practice was far more likely the product of multiple voices, and almost certainly flowed forth from the minds of scholars who were far closer to the ‘thought-world of the Continent’ than that of any ‘little England’. On the day on which Article 50 was triggered here in the UK, it was refreshing to learn that, even in the thirteenth century, scholarship could be ‘a thoroughly European affair’.

Medieval-, Bracton- and Europe-inspired conversation continued into the night, first at the wine reception after the talk and then at dinner in Zizzi’s in Gandy Street. It was a long and full day, but certainly the high point of this year’s medieval calendar. All of us at the Centre for Medieval Studies would like to extend our sincerest thanks to our visiting speakers, as well as to all of those who gave up their time to help make the event such a success. We now head towards the Easter vacation feeling re-energised and inspired by five truly outstanding presentations, each of which demonstrated, in its own way, the vibrance and relevance of the research connected to medieval studies at the University of Exeter.

Edward Mills is a postgraduate research student in the Department of Modern Languages. 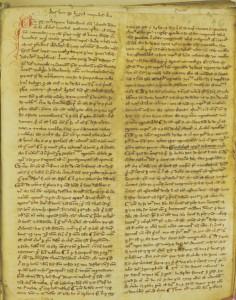