In conversation with… Alice Taylor, Part II: “Culture Wars”, the State, and Overlordship in Twelfth-Century Scotland

This is the second part of the students’ interview with Alice Taylor, an expert on medieval Scotland. This part of the discussion covers the concept of “culture wars”, the impact of an increasing literate mentality on the state, and the dynamics of overlordship.

Stuart Pracy is the chair and we rejoin the conversation with a question from Jamie Hodgskin.

JH: You were talking to Damien earlier about the Forth and how it was such a conspicuous border between the north and south… Do you think there was a sort of culture war between the incoming Anglo-Normans and the existing Gaelic magnates? 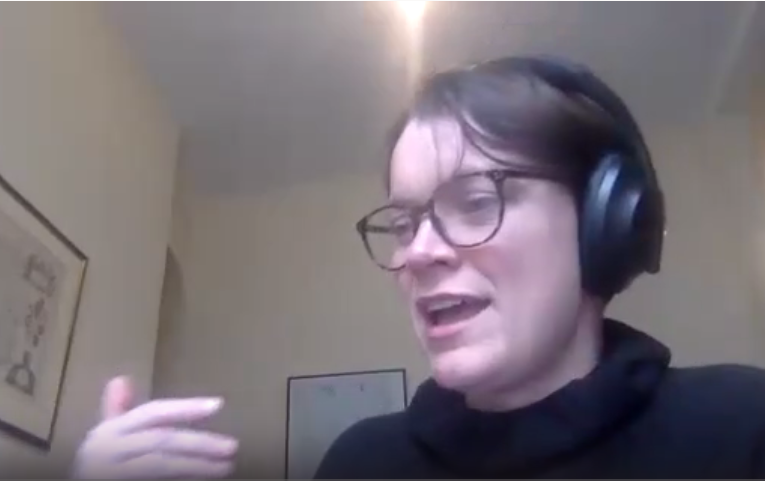 Alice Taylor: I think it’s a really difficult question to answer. First of all, the term “culture wars” is something that is located from the 1970s onwards… If you’re interested in this, there’s a very interesting book by two American historians called Fault Lines, which talks about when and how the idea of culture became part of contemporary politics and why – just FYI, super interesting! But in terms of politics being led by perceived cultural difference, I think there’s a very rich vein of potential inquiry here. There are some very oft-quoted examples, like the one from the early thirteenth-century Crowland chronicler where he says the king of Scots, at this point William, doesn’t like his own people and only listens to Frenchmen. And you’ve got the wonderful chronicle of Jordan Fantosme on the 1173-74 rebellion where he says pretty much the same thing: William doesn’t like listening to his own people. So there is an idea that there is a separation in Scotland between native counsellors and incoming counsellors, and that the king is listening only to his own men, a small cabal of people speaking a different language. There’s also some very interesting Gaelic poetry translated by Thomas Clancy in The Triumph Tree, where it’s said how bad it is that David has divided us from Alexander, i.e. David’s brother Alexander I. There’s this sense that, in the early twelfth century, Alexander was someone who didn’t make linguistic divides a thing versus David, who did…

And in the twelfth century, we also have the transformation of an elite language from Gaelic to French. But we don’t know whether that’s actually happening in Scotland, because we’ve got the issue of English here. Lothian, the heart of the kingdom, is an English-speaking area – it’s not Gaelic-speaking. So this idea of a Gaelic/French or Gaelic/English divide – these are not easy divides to talk about. You also have the methodological issues of how far linguistic differences equal cultural differences. Again, we don’t know these things. So this is a long way of saying you are looking at a period of profound change where it is possible to reframe these questions along cultural and linguistic lines. But we do not really know whether this was done, because of the difficulties in our evidence. 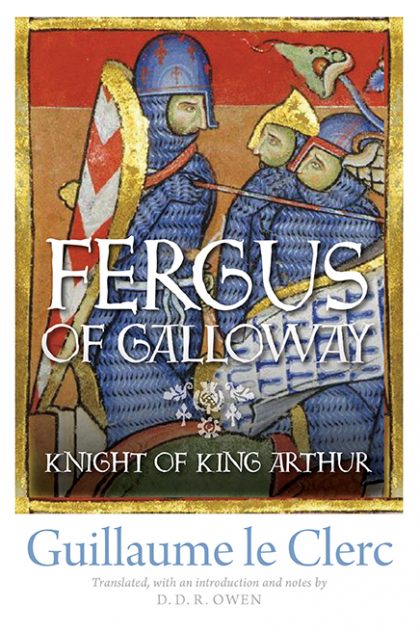 And there are other sorts of fault lines as well about Highland and Lowland that we begin to see playing out in the difference between Galwegians (the people of Galloway) and Scots. There’s a lot of stuff about the awful Galwegians and how dreadful they are. So when a French romance is written called the Romance of Fergus of Galloway, which is hilarious in many ways, the story is how this Lord Fergus becomes more “civilized”. He moves from Galloway, goes on a quest in Scotland, north of the Forth, and then is so changed by the experience that he is able to become a lord of Lothian! So that’s his journey from Galloway, Scotland, north of the Forth, to Lothian – and that’s a journey of civilizing.

So the short answer to your question is that you can’t say precisely, yes, “culture war” is the way to think about this – but it is a way into thinking about something. Even if the term doesn’t really fit, it is nonetheless interesting to think with it.

Gigi Roxburgh: The work we’ve read of yours was talking about the relationship between the Scottish royalty and the aristocracy, and I was wondering how that relationship changed in a time when there was a growing literate mentality?

AT: It’s a really good question. Let me take a few steps back… One of the big issues when looking at government in this period is the heavy hand of a much bigger historical narrative about the rise of the modern nation state. It’s been a huge pressing historical question: how do you explain the modern state? When did it emerge? Why did it emerge? And why did it emerge in Europe? In some ways, these are questions of political theory and political thought, but they are told historically, they’re told through history. One of the big changes that has been posited here, by the sociologist Max Weber and others, is the idea of the bureaucratisation and the institutionalisation of relationships of power. So you basically move from a scenario which Weber calls patrimonial power, where you can exercise power based on who you are and your inherited position, versus a scenario where power and authority are exercised through officers, as in it shouldn’t matter who I am, I’m the King, and it shouldn’t matter who you are, you’re the justice – and you fulfil that role. It’s what Weber calls the “disenchantment of modernity”. So when you’re looking at that in relation to governments in medieval states, the central Middle Ages is the first time in European history since the Roman Empire that you can begin to see the bureaucratisation of power. And this is reflected in the rise in the survival of documents as the way in which you do business. This is discussed in, sadly, the late Michael Clanchy’s extraordinary book From Memory to Written Record, where he talks about how the use of documents trumps literacy. He also said you don’t need state-sponsored education to promote literacy. You can do this through interaction with documents: pragmatic literacy.

To get it back to Scotland, there are two issues here. One is the idea that in order to have a state, you can’t have patrimonial power. In the twentieth century, this created a lot of narratives of state formation that essentially said the way in which we understand the rise of the state is the declining power of the aristocracy – that if you’ve got state formation, you necessarily have to exclude aristocratic power first. In the Middle Ages, you’ve got these moments of transition. You give out fiefs to the aristocracy and then, through bureaucracy, you take lordly power away from them and you give it to government or to the judicial system. And the big conflicts of the later Middle Ages are primarily about this: the aristocrats are cross that power is being taken away from them and the state is happy because they’re taking away power from aristocrats. And how well a state does that affects its later trajectory. So the narrative goes that the French didn’t do it well enough and that’s why you have the French Revolution. That’s the big, big historical question there.

Now in Scotland it’s much more complicated because you don’t have an end-point of a “modern nation state” because Scotland doesn’t develop into an autonomous “bureaucratic” state in the seventeenth century – it becomes part of the Union of Crowns. It retains its own distinct legal system, but it becomes incorporated into a British state. And, as a result, for a long time Scottish statehood wasn’t a pressing historical question – because there was nothing to connect it with the modern age, if that makes sense. A lot of the work that was done in the twentieth century on medieval states was very much about that longue durée idea of connection, the rise of parliament, for example, or the growth of representative institutions. So if you don’t have that modern connection, it means that scholarship gets stymied – and that’s what happened in Scottish historiography. So my book was basically about trying to write that history, i.e. what was the Scottish state?

And the second point is that it’s a really interesting example of a state where you don’t have state formation produced by this battle between aristocratic and royal interests. They kind of progressed together with aristocrats running the state in a different context. In a way, that’s quite surprising! It’s different from England and actually resembles something that’s much more like France.

So the rise of thinking about literacy is, in some way, a spur to thinking about statehood and how to understand embedded elite power in statehood. I think it’s a pressing historical question and that’s what the book was trying to do for this one polity.

Stuart Pracy: I think it’s really interesting to place your book in that longue durée discussion – and to make that idea of the bigger framework really explicit. Has anyone got any remaining questions that they want to ask?

AT: It’s a fantastic question because this is the idea behind your module ‘The Celtic Frontier’ – the idea of the creation of a frontier and what that frontier is defined in relation to. Here the rise of English kingship and its attempts to impose dominance over the remaining parts of the British Isles and Ireland is the key narrative.

To what extent do Scottish kings try to subvert this overlordship, to resist it, to accept it? In 1175, when William has been captured and the Treaty of Falaise is imposed, it’s devastating for everybody and, you could arguably say, leads directly to political conflict in Moray and in the north. It also leads to the intensification of royal government there, and it poses internal political problems for William. Partly, this is because the flipside of overlordship is protection: he is protected through his subordination. And that dynamic between resistance, domination, and protection is a dynamic we can see playing out in different ways in different contexts, i.e. with relations between Welsh princes, Irish kings, Irish lords etc. There’s been this extraordinary discovery by David Carpenter of the text of the Treaty of Norham in 1209, in which William submits to overlordship by King John. And we might ask why? In some ways, it’s because he doesn’t have a choice: when you are dealing with insurrections all the time (as William was), you probably think that you’re just going to have to commit yourself to this more powerful person.

‘the flipside of overlordship is protection’

My advice for your essay would be to look at the language of lordship that is being used in treaties, to look at the circumstances in which they were imposed, and to treat each case as participating in a similar kind of rhetoric, i.e. the language of liege lordship or overlordship. And think about the capacity of those words to bestow sometimes very heavy obligations, as in the Treaty of Falaise, and sometimes very light obligations, as in some of the early treaties with the Welsh. But then again, you’ve got to remember that they basically tear up most of these treaties after a few weeks! Like the Treaty of Windsor with Henry II – it lasts six months! You’ve also got to think about it in terms of the symbolic power of these treaties, rather than actually wanting to enforce them to the letter.

SP: Alice, thank you so much for your time. Before you go, are there any last remarks you want to make?

AT: I think the twelfth century is a really profound period for changing relationships in the British Isles and Ireland, and it’s a past that continues to be felt today. It’s still being contested, it’s still being worked out – it is very much part of current discussions! So it’s a very important time to be studying these sorts of questions.