Exeter, the capital of Devon, is a modern city with a rich historical past. Exeter was the most south-westerly Roman fortified settlement in Britain and portions of the Roman walls remain erect across the city. During the Middle Ages and into the Tudor times Exeter became a religious centre, with its majestic Cathedral constructed in the 11th century.

Nowadays Exeter is home to the Met Office, the UK’s national weather service and one of the most significant in the world, and has been identified among the top ten most profitable locations for a business to be based. It is also the home of Exeter Chiefs, the 2016/17 Premiership Rugby champions. 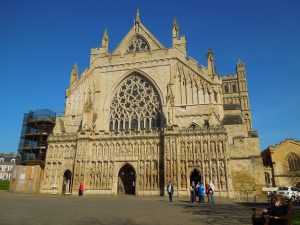 Although a picturesque city itself, Exeter is surrounded by two of the UK’s national parks (Dartmoor and Exmoor), the East Devon Area of Outstanding National Beauty and is only a short journey away from Exmouth and Dawlish, well-known seaside towns on England’s south coast.

To learn more about the history of Exeter and Devon there will be the opportunity for delegates to visit attractions such as the Red Coat Guided Tours, Exeter’s Underground Passages, museums such as the Royal Albert Memorial Museum (RAMM), the magnificent Exeter Cathedral and the Roman wall at the city’s Historic Quayside.

To get in touch