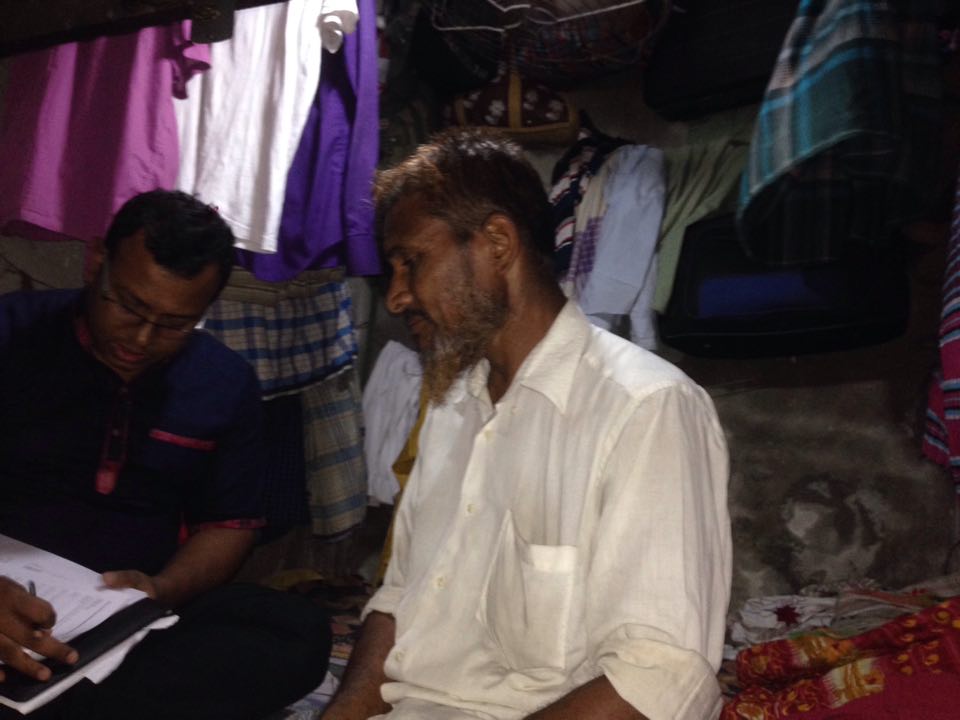 A growing number of migrants are now living in Dhaka and Chittagong in precarious conditions. Many of the migrants’ dwellings are located in areas prone to various types of hazards including fire and environmental hazards. Their homes lacking ventilation, access to electricity, piped water and basic sanitation. These vulnerable conditions were witnessed  by the RRMRU team responsible for pilot testing the migrant survey questionnaire. For example, one of the respondents, who moved to Dhaka from Bhola, a southwestern coastal delta district of Bangladesh affected by severe erosion, lives with three other migrants in a shared room accessible only via a long and narrow corridor that is never sees day light. Every dwelling in the same structure is 30 sq. feet. Like him, many other migrants live in similar rooms that were built to serve as shops in two-storey markets. Because these rooms were built to accommodate shops it is natural that there would be no attached toilets and other spaces traditionally found in purpose-built houses. Because of affordable rents and close proximity to markets and other employment opportunities, migrants move in to these spaces for accommodation. Each month they pay BDT 3000 or US$35 as a rent for this room. Additionally, they must pay a fee for every use of common toilets. There are hundreds of thousands of migrants sharing similar stories in Dhaka and Chittagong.

The respondent also shed light on employment conditions for migrants in large urban centres like Dhaka. For example, as a day labourer, every morning he attends a labour market hoping to be met by a prospective client that is looking to hiring workers. Competition is fierce among migrants and locals. If appointed, he will work between 10 to 12 hours and earn BDT 500 or the equivalent of US$ 6.00 per day. Often, in the workplace workers do not have access to basic amenities such as drinking water, resting place or access to toilets. However, if they work when in private residences or offices then they have access to facilities. On average, the respondent indicated that he can work between 15 – 20 days per month. The migrant reported a daily expenditure of BDT 200 (or US$ 2.40) between food and use of toilet and bath facilities. Whatever amount he can make over BDT 200 is set aside. When he is able to save around 6000 to 7000 BDT (US$ 70 or 80) he then travels to his home in Bhola to see his wife and his three children who are eagerly waiting for him and the money he brings home. Their survival depends on the money he earns in Dhaka.  After a week spent at home in the village, the respondent must repeat the same monthly journey – an unending cycle from his village to the city and back. Now in his early 50s the respondent revealed that he has been doing this for the last 40 years. He explains, ‘back home we don’t have many livelihood options, thousand acres of agricultural land have been eroded by the river. Now I can’t survive as a farmer and therefore I had to move’.

Similar stories can be found across Dhaka and Chittagong, the two most populated cities of Bangladesh.The United Nations Population Fund (UNFPA), in a recent study on Urbanisation and Migration, revealed that Bangladeshi cities rank really low with regard to liveability compared to other global cities. This low rank was associated with the limited access to sufficient infrastructure, degradation of environment, high level of pollution and congestion faced by Bangladeshis living in large urban centres. Moreover, several of the most important Bangladeshi cities are highly vulnerable to floods, water logging, landslides, coastal surges, and other climate induced problems. Migrants living in cities like Dhaka and Chittagong usually end up in overcrowded slums and shanty towns in areas exposed to flooding and other hazards. Migrants like our respondent contribute immensely towards Bangladesh’s economic growth.  However, they face several daily challenges around housing and working conditions. Data derived from our migrant survey will enable an analysis on how migrants can be integrated in urban planning and other policies towards sustainable cities so that human security, wellbeing and other basic needs of these new populations are integrated in the overall city development.