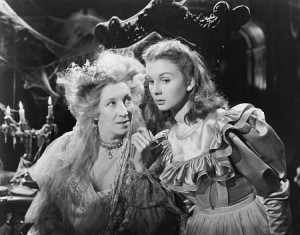 We’re all really excited to begin our season of collaboration with the Exeter Picture House Cinema, and so the title of our first ‘Page to Screen’ feature is particularly appropriate. Great Expectations is one of the great Victorian novels, epitomising all the best features of Charles Dickens’ literary flair, with unforgettable characters and a relentlessly gripping plot.

Dickens is perhaps one of the most frequently adapted writers – his stories have inspired countless film productions – and when you read those original novels, it’s not hard to see why they lend themselves so vividly to the big screen. Indeed, Dickens even inspired visual adaptations before the invention of the modern cinema, as can be seen in this short film from the British Film Institution ‘Dickens and the Magic Lantern’ – the film features Exeter University’s Dr. John Plunkett as well as Bill Douglas Centre curator Phil Wickham:

Great Expectations itself has been repeatedly adapted for film and television – and a fresh reworking from director Mike Newell, with Helena Bonham Carter as Miss Havisham is due for release in late November 2012. However, for countless cinema fans, it is this 1946 version, directed by David Lean, that is the definitive adaptation, by which all others must be compared.

However, while Great Expectations is an incredibly well-known classic, there are plenty of surprises in store – and with that in mind, we’ve rounded up some of the more unusual facts about the life and times of Charles Dickens…

If this has sparked your interest, then why not pay a visit to the Bill Douglas Centre? The BDC is a real treasure-trove of cinematic history, including some wonderful Dickens related curios, such as this novelisation of the Lean film:

You can find out more about the Bill Douglas Centre here:

You might even find something that inspires an idea for a future ‘Screen Talk’ – if so, please do get in touch via this blog or our twitter account at @ExeScreen_Talks – we really look forward to hearing from you!