Jess O’Kane, who is studying English at Exeter, Editor of Exepose Screen, came to our Screen Talks events on Upstream Color on Monday 7th October. Jess has written a guest blog post for us, reflecting on her responses to the film: 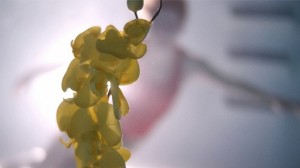 I have a terrible habit of leaving things to the last minute, when I’m usually spurred on by a waning jar of peanut butter.  Since leaving the cinema a few hours ago, however, I’ve felt an overwhelming need to solidify some thoughts on Upstream Color, I think mostly for fear that it’ll vanish as quickly and vividly as it appeared.

I wish I could tell you that, like Matt, I can contextualise Upstream Color so far as to call it “posthuman” or “mythic”. It’s probably both those things, but for my part, I can only offer an instinctive reaction – which is, I think, precisely what Carruth intended.

For really, the film may as well have been silent. That’s not to disparage it; only to point out the uniqueness of its direction. Scenes meld into one, faces blur, time comes and goes in a swerving trajectory. It’s both stunningly beautiful and at times welcomingly mundane. It’s no surprise that Carruth’s style has been most often compared to Terrence Malick, with whom he shares a hypersensory palette.

Also like Malick, Carruth’s second feature is largely preoccupied with nature. Not nature in the German-bloke-on-misty-rock Romantic way, nor human nature, but “nature” meaning the endless relations and cycles that form and dissolve us and everything. At its heart is a story of disease and rebirth – a cycle that starts with a shady thief, peaks with parasitic madness, and ends with the harvesting of beautiful blue orchids. And yet for Carruth’s protagonists this proves a kind of paralysis, a state between knowing and self-knowledge. As the parasite begins to take over, self-identification becomes increasingly difficult, and their memories join and fragment. (Was it my childhood friend who tried to drown me in the indoor pool? Or yours?)

Most interestingly, this doubt affects a need for self-legislation. Kris and Jeff begin to fall back on the rituals that the thief taught them – Jeff creates paper chains absent-mindedly, Kris endlessly recites Thoreau’s Walden, a motif to which we’ll return later. These kinds of patterns are ones we’ve come to recognise as fearful, as signifying control and a loss of agency. Yet in Upstream Color, there is also a comfort in repetition, as if each action reaffirms a cycle of its own, and the ability of the protagonists to act at all.

This connective impulse is, I think, key to having the foggiest about the film. Why, after all, does the film centre on a romance? Take the enigmatic sampler, a man who seems omnipresent and irrelevant all at once, who’s pictured obsessively trying to measure a rhythm of life only he seems to understand. Stones drop, feet rub, wood chafes. All of these actions taken alone make little sense, but taken together, they seem closer to a dialect – a kind of mediation between nature and the self.

It’s perhaps unsurprising then, that Carruth’s emblem of choice is Thoreau. Thoreau’s Transcendentalism led him to immerse himself entirely in nature, living in a simple cabin on the edge of Walden Pond in Massachussetts. On the one hand, the significance of this seems fairly straightforward; here are two people whose ability to connect with the world around them has been compromised by exterior forces. Give them life, give them Thoreau, and surely they will restore.

And yet at the same time, the text is a third party; the text is not life. Literature acts as a stimulant insofar as it causes the protagonists to recall the world around them, a fact clearly displayed at the end of the film when Kris and Jeff send the book to other survivors in order to call them to arms. But it does so by cementing the relationship between self and mediator; text, parasite, orchid. In other words, Upstream Color is not quite transcendent, or at least it doesn’t appear to be. Though the cycle of parasite-pig-orchid is broken, the cycle between protagonist-mediator-reality is merely reformulated.

That said, it’s a hopeful film. It has faith in beauty and a humanistic heart unbecoming to an out-an-out sci-fi. Carruth, like Thoreau, seems to operate in that space between paralysis and salvation, never quite committing to one truth or even expecting it, but nonetheless knowing it’s there. His direction has something microscopic about it, as if he’s trying to tune into nature through colour, shape and sound. And his protagonists are willing, in the end, to bend to this new form – conscious, apparently, of something better round the corner.

Those were my instincts. All I can say is that you’d be a fool not to see for yourself.