Fred Cooper is a PhD student at the University of Exeter researching the importance of the intersection between work and family life in post-1945 psychiatry and psychology. After attending our Screen Talks event on A Dangerous Method on Monday 21st October Fred has written a guest blog post for us, reflecting on his responses to the film: 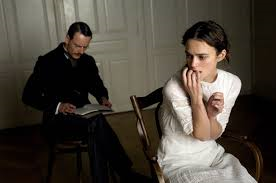 On my way to see A Dangerous Method, I was fascinated to see what the film would be like – Freud, Jung, and the early days of psychoanalysis are not easy topics for mainstream cinema. I should probably be recording a generalised, impressionistic reaction, but as I know nothing whatsoever about film criticism I can warn you in advance that this is not what you’re getting.

What I intend to do, rather, is to think a bit about the part of the film which came as the biggest surprise – the character of Sabina Spielrein – and move forward to consider the dynamics of what I found to be one of the film’s most interesting motifs: the juxtaposition between patient and analyst.

I’m ashamed to admit that I’d never heard of Spielrein and, on first watching the trailer, assumed with a mystifyingly large dollop of arrogance – and a now-shattered association of Keira Knightley with vapid supporting roles – that I hadn’t heard of her because she wasn’t historically important. Certainly big-budget films aren’t above amplifying or manufacturing a sexual dynamic to inject an extra level of excitement (sex sells, as Freud probably understood). Jana’s opening remarks immediately disabused me of this idea, something confirmed throughout the film. Spielrein emerges not merely as a significant part of Carl Jung’s life but as a catalyst for his relationship with Sigmund Freud and, later, as an original psychoanalytic thinker. If anything, the film could have put greater emphasis on Spielrein’s intellectual contribution. An audience with no existing knowledge of psychoanalysis might have struggled to identify her characterisation of sexual and destructive forces as prefiguring a fairly substantial element of the Freudian canon. Freud acknowledged this debt, albeit ambiguously, in a single footnote in Beyond the Pleasure Principle:

“A considerable part of this speculation has been anticipated in a work which is full of valuable matter and ideas but is unfortunately not entirely clear to me: (Sabina Spielrein: ‘Die Destruktion als Ursache des Werdens’, Jahrbuch für Psychoanalyse, IV, 1912).”

Alongside her foray into formal academia, however, I want to consider the influence that Spielrein exercised from a position usually synonymous with passivity – the patient. This is a recurring device, present most overtly in the scenes between Jung and Otto Gross. Although Gross is ostensibly the patient, Jung has no influence at all on his behaviour, whilst Gross drives events with Spielrein forward with his admonition to ‘never repress anything’. When Jung describes Gross as seductive, he couples Gross’s unbridled sexuality with his telling Jung exactly what he wants to hear. Gross, however, is able to transcend the patient role by his qualification as an analyst – part of the criteria for which is submission to analysis oneself. The ability amongst practitioners to analyse and be analysed implies a form of intimacy and commonality – the most significant breakdown in Freud and Jung’s relationship occurs when Freud refuses to let Jung interpret his dreams. Freud, having read Jung’s dream as indicative of hostility towards himself, refuses to engage in a reciprocal acquiescence to Jung’s expertise.

Whilst both Jung and Freud and Jung and Gross inhabit dual roles in their association with each other, however, Spielrein as patient and Spielrein as analyst are temporally distinct entities. Spielrein during her patient phase clearly wields an abnormal amount of power on Jung as a man – he sleeps with her, confides in her, spanks her and claims to love her – but her affect on him as an analyst, on the development of his clinical knowledge, is not fully explored. Scientific understanding is being constructed and confirmed at Jung’s desk – with Jung himself as a receptacle of contemporary prejudices, anxieties, and theories about the mind – but also in the discourse between himself and Spielrein. Much like “Anna O”, Josef Breuer’s patient (and a prominent feminist), a fellow “hysteric” whose treatment has been argued to form the foundation stone of psychoanalysis, she was translating her visceral experience of illness into language comprehensible by the practitioner.

In many ways, this is understood to be the most authentic aspect of medicine. The doctor is in possession of a written expertise that draws on a long tradition and accumulation of knowledge and which is often mystifying to the patient. However, the patient also has an intrinsic physical and mental expertise that the doctor can only partially understand, and which he or she enters into their lexicon in adumbrated form. The clinical encounter is usually preoccupied with reconciling one to the other. In psychiatry, this has often been at the expense of the patient’s claims to truth.

What A Dangerous Method does is to encourage us to move beyond easy assumptions regarding agency, authorship and power in medicine. Spielrein is, admittedly, a remarkable example. An articulate, wilful and insightful woman being treated – and then writing – at the cutting-edge of psychoanalytic experimentation, her impact and influence are relatively straightforward to trace. Her story reminds us, however, that the accumulation of medical knowledge has always involved a dialogue, however limited. Medicine has usually been at its worst when the experience of the patient has been subsumed in the determinism of inflexible diagnoses, reductive disease models and off-the-peg treatment. It has also usually been at its best when the dialogue was democratic.