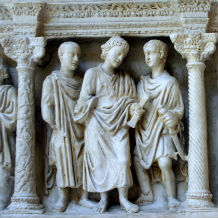 The conference aims to develop current research by exploring various forms of construction and negotiation of religious identities (both individual and communal) in late-antique written texts and material culture, focussing on the ‘long fourth century’ (roughly from the Tetrarchy to Theodosius II). In particular, we will emphasise the importance of rhetoric to this question, incorporating both rhetoric as used by late-antique figures themselves and also the rhetoric evident in the later construction and use of markers of religious identity. Not only will we employ a broad conception of the notion of ‘rhetoric’ which includes literary material and the artistic, epigraphic, numismatic and architectural record, but we will also aim at a more conceptually-informed and illuminating understanding of what is meant by ‘rhetoric’ in this context.

The conference will run from lunchtime on Thursday 23rd to lunchtime on Saturday 25th April. Online registration will open later this month, but places will be limited, so if you’re interested in attending, please get in touch. There will be a modest conference fee to cover the cost of the lunches, and evening meals (including the conference dinner on the Friday) will cost extra. Five full postgraduate bursaries are available to cover accommodation for two nights, conference fee, dinners on Thursday and Friday and up to £150 of travel costs. Interested postgraduates (including those from outside the UK) should apply by email to Richard Flower by Saturday 28th February, attaching a brief CV and a statement (of no more than 250 words) outlining why attending the conference would be beneficial to their studies. They should also ask their supervisor to email by the same date with a very short supporting statement.

This conference is organised by Dr Richard Flower and Dr Morwenna Ludlow  and is generously supported by the Arts and Humanities Research Council and the University of Exeter, through the Humanities and Social Science Strategy ‘Identities and Beliefs’ theme.