For a blind person to experience the world of astronomy and space science, there is little help but theory and imagination. ‘Space in Your Hands’ will reach out to those who cannot see and open to them, literally in their hands, the research world that others visually experience with models or observations. A blind person holding and discovering the properties of the Sun in their hand would reconcile them with the source of the unseen light in a most symbolic way. The project will help the visually impaired to understand the 3D shapes that make up our space environment and beyond. 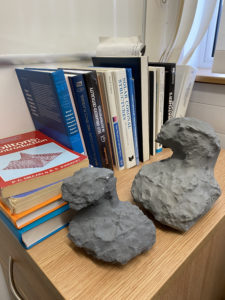 The project uses the engineering polyamide, which has been developed for high resolution and feature creation of freeform geometries, perfect to create fine, robust and tactile object representations of modern space and astrophysics that could be accessible to all.
Production was done at the University of Exeter Centre for Additive Layer and Manufacturing (CALM). CALM is one of about 10 University centres across the UK that has the engineering capabilities required for this project. Although the technology is costly at first, replication from the digital models can be widely achieved with regular cheaper 3D printers. 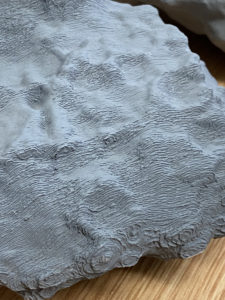 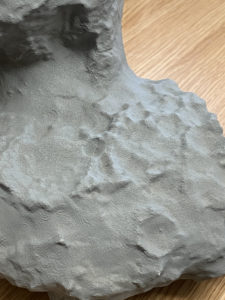 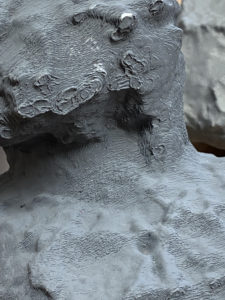 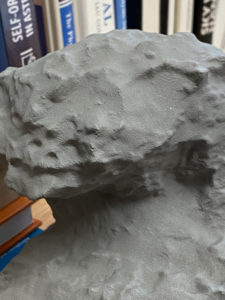 Above are photos to demonstrate the difference in quality of the comet models, The left is a cheaper model made using laser sintering. The lower cost means the sintering is visible and the size is smaller, but the overall feel and effect of the model is the same as the higher budget comet on the right.

Special attention has been placed in the design of fifteen educational prototypes to meet the needs of communities. If the project is facilitated to continue, latest advances in research, variations in texture and colours will be incorporated in the choice of 3D-rendered designs such as the solar interior and atmosphere, coronal and heliospheric structures, magnetosphere, moon, comet 67P/C-G, Saturn, galaxies, pulsars…
The first platform to run a workshop around the 3D prints and to deliver science, inspired in this case by the Rosetta mission, was at the EMS Summer residential on the 10th of August 2015 with forty 15 year old sighted students from around the South West.
In the trial workshop, the students estimated the volume and mass and thus the density of the comet. The comet was used in a simple experiment taking the displacement of water caused by the object in a glass tank to calculate the volume of the scaled comet. Evaluation forms and photos were collected. (see below).
The other 2 3D prints of the comets were circulated among student groups and feedback was collected from the focus group. Feedback showed that the students who held the 3D comet in their hands found it useful to understand its volume and density, proving the first practical application of the project successful.