Translated from the German by Susan Bernofsky (Portobello Books, 2015)

Jenny Erpenbeck is hailed as one of Europe’s most highly regarded writers, and in 2015 her stunning novel The End of Days won the Independent Foreign Fiction Prize (the last one before it was merged with the Man Booker International Prize). As with the first book I read for this project (also published by Portobello – they have a wonderful translated fiction list), I have to thank my husband for introducing me to Erpenbeck: he was one of the judges on the 2015 Independent Foreign Fiction Prize, and I remember him talking to me animatedly about The End of Days at the time. It took me three years to get around to following his recommendation, but it was worth the wait. The End of Days is a historical saga with a difference, recounting the many ways in which a life could have been lived (and died). At various points throughout the twentieth century, the same character dies as a baby, a teenager, a young woman, a middle-aged woman, and an old woman, with the underlying premise that “the day on which a life comes to an end is far from being the end of days”. It’s a gripping, page-turning, emotion-investing joy of a book, and I cannot recommend it highly enough. Susan Bernofsky is Erpenbeck’s regular translator, and this translation is flawless. Indeed, Bernofsky is rapidly becoming someone whose work I would actively seek out (I recently read her translation of Yoko Tawada’s Memoirs of a Polar Bear, and it’s equally stunning). Most recently, Erpenbeck published Go, Went, Gone (also translated by Bernofsky, and also published by Portobello), which was longlisted for the 2018 Man Booker International Prize. 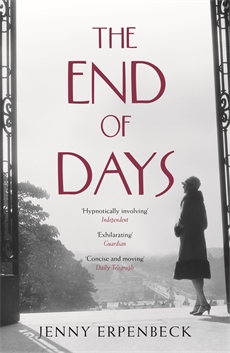 Boyd Tonkin (founder of the Independent Foreign Fiction Prize, and author of the forthcoming 100 Best Novels in Translation), says of Erpenbeck that “Her female protagonists, thrust into proximity to total war, genocide, or social upheaval in Germany and the adjacent lands, must survive and seek freedom amid the blood and fire of this uniform collective destiny”: The End of Days sweeps through twentieth-century history, refusing to align itself with any one system, ideology, or “collective destiny”. It is both a reflection on the minuteness of a single human life and a manifesto for the difference one life can make. Endings are never definitive, and the narrative is circular rather than linear: we keep returning to the handful of snow that saved the baby’s life, and even the Complete Works of Goethe goes full circle as the main character’s son considers buying it for her in an antique shop, unaware that it was the very volume pawned by her mother decades ago. He leaves it on the shelf, along with his past – an example of Erpenbeck’s resolute avoidance of the trite or the simplistic.

Reviews of The End of Days have – unsurprisingly – been overwhelmingly positive, but mostly have a sting in the tail somewhere (for example, though Kapka Kassabova finds it “exhilarating” and “shot through with an insight that almost blinds”, she also at times finds it “over-constructed and rootless”, and Alice Fishburn describes it as “beautifully written”, but “not easy on the reader”). For me, though, there’s no caveat to my appreciation of this book: the construction is powerful and thought-provoking, its roots firmly in twentieth-century history but entwined with existential speculation, and if ever I felt that it was not easy owing to the reluctance to name characters or my own lack of familiarity with some of the historical phenomena, it only made me re-read and further engage with the text in front of me.

Each of the five books within the story depicts a different possible path for the protagonist’s life: in the first scenario, an infant girl dies, and the mother is left childless and abandoned by her husband. In the second, the child lives because her mother thought to put a handful of snow on her chest when she was dying, and she grows up in Vienna during the First World War. She feels that life is like a round black room with no door, and that she can never be loved, while her mother cannot shake the belief that “all her life she’s paid for having snatched her first child back from hell with nothing more than a handful of snow”. She dies in a suicide pact gone wrong, leaving the mother mourning again. The third section sees the girl now a woman, a Communist writer living in Moscow. She is writing her life story; her husband has been arrested, and she knows that “they” may come for her soon. The section ends when she falls asleep on her desk, and does not hear them come for her in the early hours of the morning.

In the fourth book, the as yet unnamed protagonist dies at the beginning, a noted and respected anti-fascist who devoted her life to working tirelessly for the working classes. She has died falling down a staircase in her home (an event foreshadowed at various points throughout the book), leaving her son Sasha behind. This section is narrated from Sasha’s perspective, and gives us a personal insight into the main character as she aged. There is a man at the funeral who he instinctively knows is the father he never met, and this knowledge is explained in a phrase that sums up everything I loved about the style of this beautiful book: “it’s as if his memory were a curtain suddenly ripping in two”.

What if she didn’t die from a fall? In the fifth book, the woman – now given a name, Frau Hoffman – has lived to be a grandmother, but she is going senile. The story comes full circle as her son travels to Vienna, and in an antique shop tries to find a gift to bring back for his mother, and almost buys the very Complete Works of Goethe that his great-grandmother brought with her at the start of the century, and which has passed from them to a pawn shop when the women were deported, from where it was purchased by a war bride. After her death many years later, it finds its way back to an antique shop by way of her daughter. The cycles, contingencies, departures and returns reflect the protagonist’s repeated lingering at “the entrance to the underworld”, and her repeated retreat to live out another possible version of her days.

The End of Days is a tour de force: sharply clever, breathtakingly ambitious, and unbearably poignant. At its heart are profound and unsettling questions: What difference does one life make? Is a longer life always a better life? What impact does one choice in one moment have on the course of a life, and of history? Does one seemingly random event merely make a person deviate temporarily from the course of their fate, only to return to the same fate in a different way? Yet Erpenbeck never pontificates, never offers answers to these questions: instead, she exposes the interplay of chance and contingency on which life – a single life, and all life – is based. If you feel as though enough literature has been written about twentieth-century German history, think again. You need The End of Days on your bookshelf.

Note: “Pulling apart the threads of destiny” is a description taken from the Portobello books website.