Translated from the German by Jen Calleja (Peirene, 2017)

Dance by the Canal was the third book released by Peirene in their “East and West” series, and narrates an unconventional coming of age at a pivotal moment in German history (Kerstin Hensel’s original text, Tanz am Kanal, was written shortly after the fall of the Berlin Wall). Yet although Dance by the Canal could be read as a novel about the GDR and its demise, it is much more than this, suggesting what could happen when a woman cannot fit into any of the roles imposed on her. The narrative challenges the framework of German society both before and after reunification, questioning any system presented as ideal, and offering other ways of living – in particular, through writing. That is not to say that Hensel proposes any new utopia in place of the discredited one(s): on the contrary, this is not a story of coming-of-age success, but rather the story of a decline and descent, with an uncertain ending. 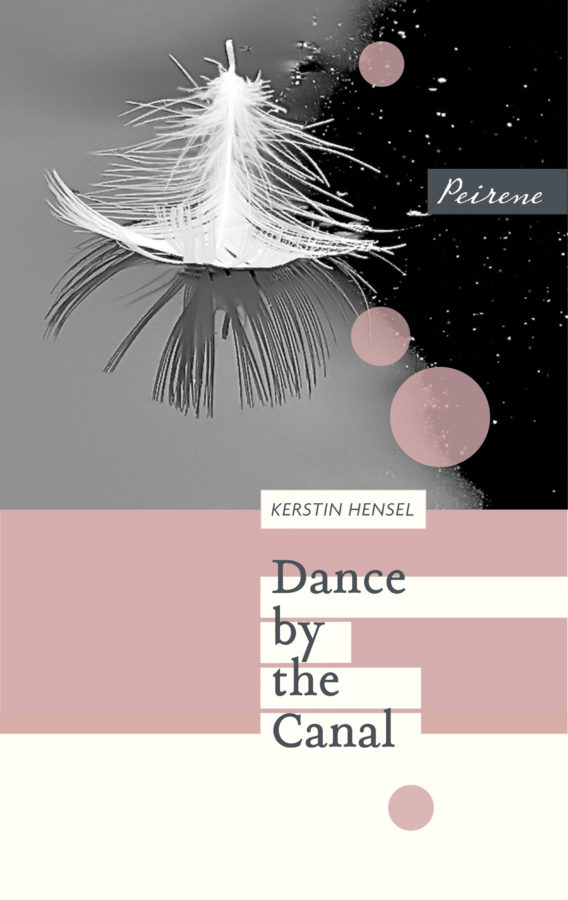 Kerstin Hensel is a prolific author, having published over thirty books and won several literary prizes. Jen Calleja recently finished her time as Translator in Residence at the British Library: this was her first translated novel (though she had previously translated non-fiction), and it’s an astonishing debut. Dance by the Canal can’t have been an easy book to translate, as it is imbued not only with the specific history of the GDR, but also with alienating uses of language and an unusual plotline that is meant to destabilise. Indeed, at a recent encounter between Hensel and Calleja, Calleja noted that she had never read anything like it and that, when reading this book, you have to let go of the “typical reading experience”. Perhaps that’s why I needed to read it twice: in my first reading, I enjoyed Dance by the Canal, but it wasn’t what I had been expecting, and I thought I’d missed something obvious because I didn’t understand the ending. When Calleja pointed out that the ending is deliberately destabilising, it was like the clouds parting: there wasn’t necessarily some deeper meaning that I had failed to detect, but rather I had failed to detect the intention of the book itself. It is supposed to be surreal, deliberately leaves questions unanswered, and consciously blurs boundaries between what is “truth” and what is “fiction”.

One of the central thrusts of the novel is the tension between name and identity: the main character, Gabriela von Haßlau, comes from an upper-middle-class family at a time when, under Communism, there were not supposed to be any class differences. Nonetheless, her difference is apparent throughout: she is teased at school for her aristocratic name, but at home she is a “silly little Binka”, never managing to live up to her parents’ expectations of the accomplishments she ought to possess. Gabriela’s father is a vascular surgeon, a patriarch, an abuser of power, and a heavy drinker; her mother is a fickle society hostess. Their aristocratic pretentions are juxtaposed with the chaotic hilarity of a larger-than-life uncle, but farcical family gatherings soon tip into darkness when the words “they’ve shot your Uncle Schorsch” signal the end of the “bad German” in the family. Even this event is shrouded in mystery, and shielded from Gabriela: “Father called Uncle Schorsch a fool, even though he hated the Russians too; they were the reason for his sadness, his fog… I was sent out of the room.” Gabriela is repeatedly dismissed from important conversations, and understands very little of what is happening around her, trapped as she is in other people’s narratives of reality.

“The uncertain nature of many of the episodes seems a deliberate choice not only of the author and translator, but also of the narrator: Gabriela is asserting control of her story by blurring what is and is not real.”

Throughout her story, Gabriela must try to avoid madness (or falling down the “last hole”) and run from an “awakening”. She is abused as a child (an encounter which she mistakes for love), raped as an adult (which is denounced as an episode of self-harm), pressured to become a mole for the secret police (though she is adamant that she knows nothing) – then “saved” by a group of feminist journalists who want to publish her story. Most of the people she meets attempt to exploit her in one way or another, and she never truly fits in anywhere: she is not allowed to be friends with Katka, a working class girl from a squalid home, but yet Katka is the only true friend she has. She is a poet and a writer, but lives variously under a bridge and in the broom cupboard of the tavern where she washes glasses under the watchful eye of the other homeless people of the fictitious East German town of Leibnitz. This eventful, unconventional life is summed up by Gabriela herself: “Anhaltinian nobility. Fffon Haßlau. Poet. Naked in front of a cop. Who’ll believe it?” Gabriela isn’t only a victim, though. She rejects complicity with the way of life imposed on her, leaving school, forming connections with people her family disapprove of, and ultimately choosing the path that her family would most revile: becoming homeless. But even as a homeless person she does not fit in: she is laughed at by her peers, and prizes paper as highly as food, writing her story on whatever scavenged paper she can find.

Two stories unfold at once: the life Gabriela is living, and the life that led up to it. Through the writing of her story, Gabriela takes us back from the present, throughout her past, and leads up to the end, the “once in a century summer” which is actually where the story began. The narrative develops in a way that can only be described as surreal: after leaving school, Gabriela is given a desk job at the cultural centre of an industrial plant, where she was supposed to have been training as a mechanical engineer. She is to be a mole, though this is not clear to her at first (she gets fired, but is encouraged to carry on writing, though she is not entirely sure why). But perhaps one of the most bizarre episodes is when Gabriela attends an arts evening, where she is to read her poetry, her “last chance” (it is unclear exactly what this “last chance” means – the last chance for redemption, yes, but the form this redemption is to take is not explicit). Gabriela sees Samuel (her mother’s lover) and asks him where her mother is. He simply replies “Haven’t you heard?” and is then carried off by the crowd before Gabriela can ascertain what she apparently has not heard (and which is never revealed to us). She then sees Frau Popiol, her childhood violin teacher, who propels her onto the stage where Gabriela reads out her poetry (to rapturous applause), before being whirled off into dancing. Gabriela recognises that she is “sick” and the whole episode is entirely surreal, all the more so when she ends up dancing with someone in a creased black dress, and realises it is her childhood friend Katka, now an artist. Gabriela awakes the next morning naked at home, with the door broken down and the sinister, grotesque secret police officer Queck standing above her.

The uncertain nature of many of the episodes seems a deliberate choice not only of the author and translator, but also of the narrator: Gabriela is asserting control of her story by blurring what is and is not real. She alone knows the distinction between her reality and her fiction, and any over-explanation in the translation would not have done justice to Hensel’s original. Calleja does not interpret for the reader, but rather leaves space for interpretation: if the German is disorientating, then the English should be no less so. Indeed, this is one of the great successes of the translation: if there is any alienation from the text, it is because it is meant to be alienating. This is not a story of communist oppression and capitalist redemption, but a story of a woman who cannot find her place in any regime. Gabriela’s only path is to write, but this is not simply because she is a victim who has no other place in the system. Rather, she writes to carve out a new space for herself, taking control of her story in order to survive: “ I sense a future within me: something could come of my story.” Her story is at times absurd, but this serves to highlight the absurdity of a society beset by amnesia and the re-writing of history. Into this history Gabriela writes her own: a compelling, challenging, messy history, but one that is uniquely hers, and which Calleja deftly re-tells to a new audience.