Translated from the German by Douglas Irving (Neem Tree Press, 2019)

Neem Tree Press is a new UK-based independent publisher, and I was fortunate to receive a review copy of their latest release, Distant Signs. In this intimate depiction of three generations of a German family in the twentieth century, different family members live through the Second World War, the German Democratic Republic and the fall of the Berlin Wall; each generation longs for a happy life, but this common goal is compromised by historical restrictions and family misunderstandings. A family tree is provided by way of a preface to the book, and the first two people we meet are the middle generation, Margret and Hans. Margret is the daughter of a university professor, Hans a future biology student from a provincial town, and they meet and fall in love during an agricultural placement in the 1960s. Yet, instead of a fresh start free from the shackles of their complex relationships with their own parents, they soon fall into patterns of behaviour that perpetuate the very coldness (in Margret’s case) and anxieties (in Hans’s) that they suffered from as they were growing up. 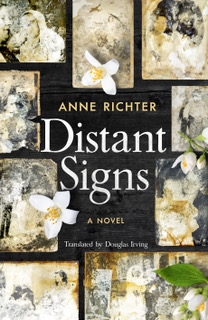 Though the major historical events are notably absent (for example, the narrative vignettes skip from 1988 to 1992), this does not mean to say that history does not feature – it dominates the characters’ lives, whether through Margret’s father Friedrich’s attitude that “in our times, private matters must come second to societal”, Hans being told at a party leadership meeting that he must break off relations with his best friend, or Hans and Margret’s daughter Sonja attending an illicit Christian youth group that results in her school grades being lowered as punishment for her transgression. At all times, the personal portraits are underscored by a history that is never intrusive but is ever present: to describe Distant Signs as understated would itself be an understatement, but this adds to the appeal of the book. The most harrowing events are imparted in single sentences, such as when Tante Anna has been trying to dig a grave for her thirteen-year-old daughter, fatally wounded at the airfield that they were all made to build:

“Around lunchtime Tante Anna came up to us. She looked very pale and told us she was going to look for a bigger shovel, that the grave was still too narrow. The following day the neighbour rang our door and begged me to untie the rope from her attic ceiling.”

It was at this section that the story truly became alive for me, when I could get past a few awkward renderings in the translation and engage with the lives of the protagonists and their families. I found the most moving part about the inter-generational narrative approach to be the way in which each member of the family keeps silent, guarding the pain of their own memories. This is, perhaps, the legacy of living under a system where expressing thoughts that diverged from official state policy or that put personal needs before the good of the state could have dire consequences. But the silence transmitted between the generations is devastating, condemning them to repeat their parents’ mistakes and never to understand one another; take, for example, this section involving Margret’s daughter (Sonja) and her mother (Johanna):

“While a gentle clatter emanated from the kitchen, Sonja drew nearer to Johanna. ‘Mummy’s sick. Yesterday morning she lay in bed, cried and said she didn’t want to see anyone. She asked me to call school. Daddy was shouting at her again.’
Annoyed, Johanna waved dismissively. ‘Think of all we’ve come through.’
Sonja stared at her, as though trying to fathom the hidden meaning of her grandmother’s words. This look of Sonja did Johanna good, and she wondered whether she should tell the girl about herself. Then Lene pushed open the living room door with her foot.”

I’ll get the gripe out of the way first: “this look of Sonja”. Leaving the ambiguous preposition aside, there is so much beauty and pain in this passage: we learn of Margret’s inability to cope with life in the child’s view that “Mummy’s sick”, of her increasingly strained relationship with Hans (“Daddy was shouting at her again”), but more than anything, we see how Johanna, who lived through the war and kept three children alive only for them to complain that their relationships were imperfect, dismisses these concerns with a terse “think of all we’ve come through”. We have weathered far worse, she implies, and this is self-indulgent. That a mother cannot feel empathy for her daughter, trapped in an unhappy marriage, because there are worse things exemplifies everything I admired about this book – its strength is in the subtle way it exposes each character’s inability to truly understand the others. The moment when Johanna teeters on the brink of her own silence, impelled to open up and create an intimacy with her granddaughter, is also symbolic: Lene (Hans’s mother) enters the room, and the silence of the older generation closes up again.

The translation did, in some places, let down the story. There were some odd expressions, ranging from the overly literary/ archaic (a jacket being “redolent” of pipe tobacco, the inversion of “I cared not”) or unnatural syntax (“the basin where lay greenish coins”) to a repeated use of “thought to” rather than “thought + subject” (e.g. “Hans thought to detect a musty smell as he contemplated them”). Nonetheless, Irving has clearly tried to give each character a distinctive voice, which I very much welcomed as, alongside the family tree provided at the front and the running header reminding us of the year, this made sure that I always knew who was talking and what the implication was for a person of that age in that particular decade.

Though each generation seems condemned to repeat the mistakes of the previous one, the hope for the future lies with a teenage Sonja. Margret realises that though times may change, basic desires might provide common ground:

“It was the first time that Margret had studied Sonja’s wall, and suddenly she understood that her daughter dreamed of nothing other than what Margret had longed for once: an unconditional love and a fairer world; and yet, for Sonja, these wishes had other colours and forms to those they had had for Margret.”

Taking herself out of a historical time, Margret tries to connect with her daughter through a shared sense of idealism and new beginnings. The narrative ends with Sonja’s new life – I shan’t give any spoilers, but it is an appropriate opening towards modernity while avoiding potentially trite reconciliations that would be at odds with the overarching theme of failed communication. Distant Signs is a different take on a much-written-about period of history: it was unexpected, delicate, and extremely memorable.