Translated from the Polish by Jennifer Croft (Fitzcarraldo, 2017)

In honour of last night’s Man Booker International prize announcement, I’m publishing a special mid-week review post on the winning book, Olga Tokarczuk’s Flights. Though Tokarczuk is not yet as well-known in England as she is in Poland and in other parts of Europe, the award of the MBI prize to Jennifer Croft’s translation of Flights for Fitzcarraldo Editions will undoubtedly bring much-deserved attention to her work. In a recent interview, Croft says that she spent ten years trying to get Flights published, and her dedication to the text is evident throughout the translation. There were only a couple of turns of phrase or word choices that struck me as a little odd or incongruous, but when I checked these, they were perfectly standard uses of US English. So this leaves me with not a bad word to say about the translation: it is really quite beautiful. Flights is a remarkable book: observant, shrewd, philosophical and intricate, and I admire the quiet sensitivity, the range of accuracy and detail, and the depth of understanding of Tokarczuk’s text that Croft displays in her translation. 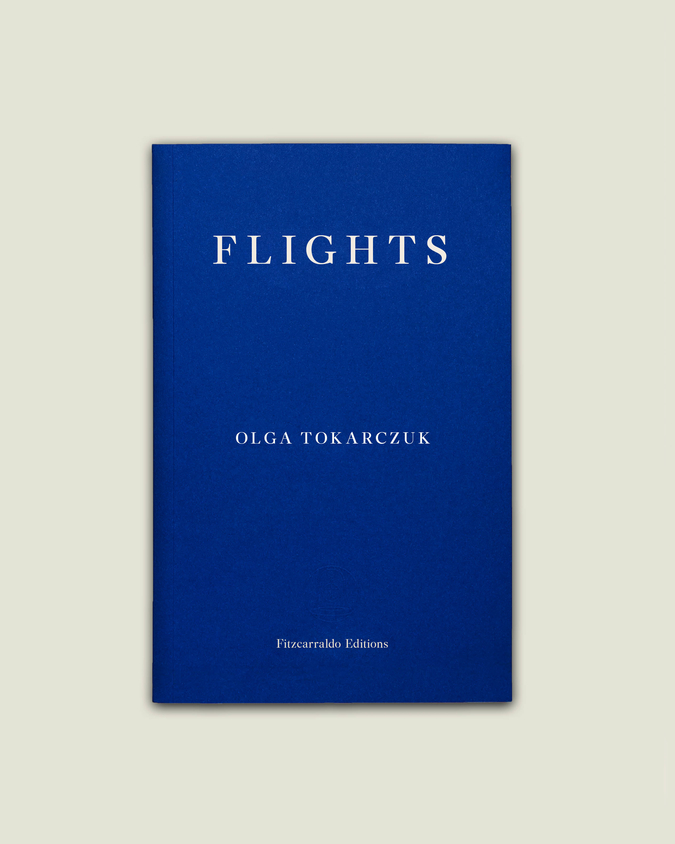 The structure of Flights is not easy to define. It presents numerous stories of varying length – some invented, some based on historical fact, many (but not all) to do with the pickling and preserving of human bodies – and these are punctuated by the ongoing travelogue of an unnamed female narrator. Though the different stories are, for the most part, apparently unconnected, they all share common themes of movement, nomadism, and the convergence of time and place. From the harrowing tale of a mother and son vanished from a Croatian island in ‘Kunicki: Water (II)’ to the hilarious drunken sailor taking his ferryboat passengers out to the open sea in ‘Ash Wednesday Feast’, Flights is an eclectic collection of stories, and yet it is not a short story collection. It defies genre, blending short stories with travel narratives, and studies of human anatomy with philosophical musings on time and place. If there is any way of describing Flights, perhaps it is as ‘episodes’, a definition to be found within the pages of the book itself: ‘We often refer to separate stages of time as episodes. They have no consequences, interrupting time without becoming part of it. They are self-contained occurrences, each starting from scratch; each beginning and each end is absolute’. It is, however, revealing that Tokarczuk puts these words in the mouth of a young tour guide, ‘quite young, wearing army boots, her hair pinned up in a way I found amusing; she must have been fresh out of her master’s programme’. So although we are given hints as to how we might categorise this book, these are destabilised even as they are presented to us. At a later point, the narrator even muses on her choice of writing mode: ‘Am I doing the right thing by telling stories? Wouldn’t it be better to fasten the mind with a clip, tighten the reins and express myself not by means of stories and histories, but with the simplicity of a lecture, where in sentence after sentence a single thought gets clarified, and then others are tacked onto it in the succeeding paragraphs?’

Ouch. So maybe I shouldn’t try to analyse this at all, but rather refer you to Claire Armitstead’s explanation of Tokarczuk’s own view of Flights, namely that ‘what she calls her “constellation novels” throw stories, essays and sketches into orbit, allowing the reader’s imagination to form them into meaningful shapes’. I think, though, that Tokarczuk’s own definition doesn’t do justice to her cleverly crafted work. For example, if you’re still wondering what pickling human bodies has to do with travel writing, Tokarczuk gently explains it on the penultimate page, when her narrator, waiting for a flight, takes out a notebook and writes about another passenger, also waiting for a flight, and also writing in his notebook (possibly about her): ‘We will simply write each other down, which is the safest form of communication and of transit; we will reciprocally transform each other into letters and initials, immortalize each other, plastinate each other, submerge each other in formaldehyde phrases and pages’. The book itself becomes a preserved artefact – and yet it doesn’t, because it will shift and transform with every reading of it.

Is your mind boggling yet? Let’s talk about the title for a moment, then. The translated title has come under scrutiny, as there was no word in English that could cover all meanings of the original title, Bieguni. Kapka Kassabova writes of bieguni that ‘this word is the key to the book […] The bieguni, or wanderers, are an obscure and possibly fictional Slavic sect who have rejected settled life for an existence of constant movement’.  I like the idea of ‘wanderings’ rather than ‘flights’ (though it would have made for an awful title), as many of the tales in Flights deal with journeys that are not airborne. The problem of translating the title is further complicated by Monique Charlesworth’s revelation that bieguni ‘also has the meaning of running or jogging in every Slavic language, says Tokarczuk; that also defined her book in a certain way’.

I do like a knotty translation problem. Although ‘flights’ may not suggest ‘wandering’ and ‘running’, it brings other implications to the English translation that enrich the work: Flights offers a birds-eye view, it takes flight, it flees. It is an action, an act, a trajectory, the passage of time, a flock, a stairway between different levels of meaning.

As for the content, I found the focus on human anatomy a little uncomfortable – get me near a scalpel and I’ll become squeamish – but the observations on the preservation of human bodies or body parts was nonetheless a thought-provoking counterpoint to the nomadism elsewhere. Tokarczuk dissects and disrupts preconceived notions of what constitutes ‘movement’ or ‘stasis’ as the mapping out of the human body becomes its own form of topography. Connections are drawn between anatomy and travel narratives: Chopin’s heart makes a posthumous journey from Paris to his desired resting place in Warsaw; the ‘phantom pain’ of a 17th-century anatomist whose leg was amputated is echoed in the ‘phantom pain’ felt by the modern-day Kunicki in the second part of his story, when his wife and child are returned to him but his wife refuses to tell him where they went. But if you think I’ve made a clever connection off my own bat, think again: Tokarczuk urges us to find these connections, because ‘there are different kinds of looking. One kind of looking allows you to simply see objects, useful human things, honest and concrete, which you know right away how to use and what for. And then there’s panoramic viewing, a more general view, thanks to which you notice links between objects, their network of reflections’. It’s slightly unnerving that every original observation I might *think* I’ve come up with about this book has already been foreseen by its author.

Perhaps this is the reason why reviewers have noted that, though they admired Flights, it is a difficult book to write about: Michael Kitto describes it as a novel ‘that should be experienced rather than written about’, and Ken Calfus found it to be ‘a dense challenging novel [that] makes for slow reading’. I must admit that I was quite relieved to find I wasn’t alone in finding this a challenging read. This does not in any way detract from my admiration of Flights, but it was certainly a different kind of experience than most of the novels I’m reading for this project. There were sections I enjoyed more than others: my favourite was the one entitled ‘Flights’, in which the bieguni appear. The protagonist, Annushka, needs to escape her daily life, and in her wanderings through monuments and crowds, she begins to follow a shrouded woman who is always muttering something to herself. Everything about this story is imbued with double meanings; take for instance Annushka’s observation of two particular passengers on her metro journey: ‘Why does she remember those two? I suspect because they’re constant, somehow, as though they moved differently, more slowly. Everyone else is like a river, a current, water that flows from here to there, creating eddies and waves, but each particular form, being fleeting, disappears, and the river forgets about them. But those two move against the current, which is why they stand out the way they do’. Couldn’t we say the same of particular episodes in Tokarczuk’s collection? And yet even as I write this, I suspect that Tokarczuk had already thought of that.

Flights is about movement, both outside and inside, physical journeys around the world and psychological journeys within oneself. It is about nomadism and spirituality (for, after all, ‘Blessed is he who leaves’). It is about connections – with places, people, ideas – and it is a rallying cry against capitalism and consumerism, against the ‘frozen order’ created to ‘falsify time’s passage’. It is about knowledge itself, but not about imprisoning or codifying knowledge in encyclopaedias or guidebooks: indeed, as Kunicki’s story shows us, the desire for too much knowledge might make us lose everything. Tokarczuk is both erudite and quick-witted (for her incisive comment, look no further than the 16-line interlude ‘North Pole Expeditions’ or the 4-line ‘Even’), and if there is a challenge in this book, it is more than just the difficulty of categorising it, or its denseness. It is the impossibility of describing time itself: ‘Moments, crumbs, fleeting configurations – no sooner have they come into existence than they fall to pieces’. Flights may not be an easy read, but it’s an extraordinarily beautiful one. 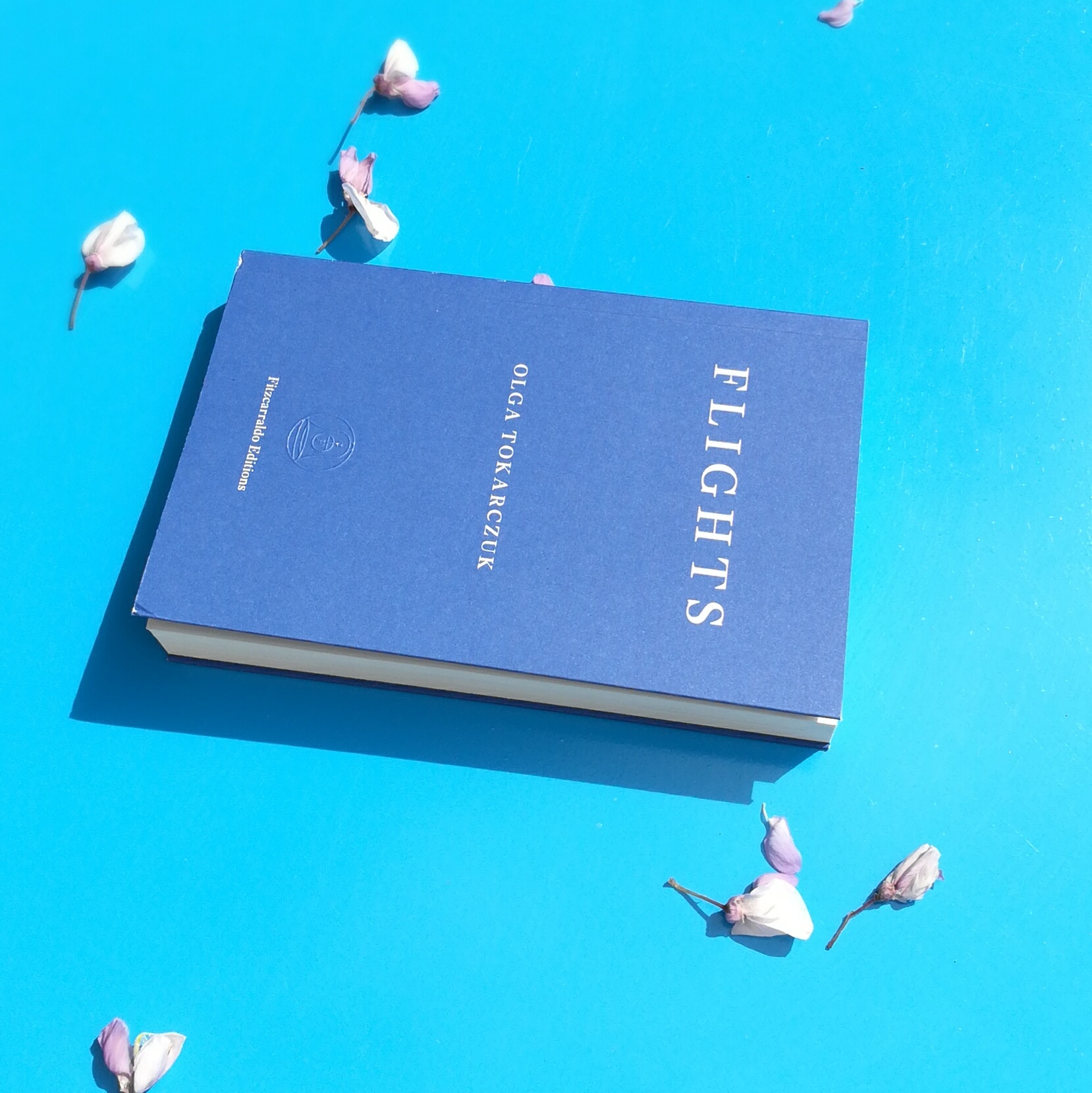