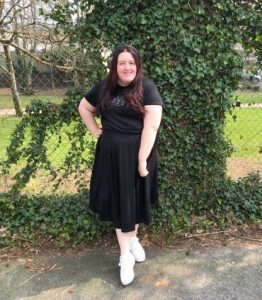 Lauryn Mathews is a second year BSc Psychology student and blogger based on the Streatham campus. She has shared her insights into being a student with an autistic spectrum condition.

‘Surrounding yourself with the right people and making your anxieties known so that they can be prevented as much as possible really is vital.’

This week marks Neurodiversity Celebration Week. It is vital to raise awareness of what autism is and how it impacts upon people in different ways, as a result of it being a spectrum disorder. However, let’s talk about my experiences in University as someone with an autistic spectrum disorder and break down some of the stigmas surrounding it. Believe it or not, me not wanting to do certain things isn’t me being ‘rude’, it’s the result of a lifelong neurodevelopmental disorder…

‘So, don’t think that we are boring just because we’d rather stay somewhere we feel safe.’

For me, my sensory issues have one of the biggest impacts on my life. Since moving to University, I have found that not many people understand this. For example, students are renowned for living in messy houses but this is the type of thing that triggers my anxiety, resulting in me having meltdowns that leave me unable to leave my room for days. When I’ve tried to discuss this with the people I live with, I have been made out to be the bad person. This is not the case. We shouldn’t be made to feel like we can’t talk about what is making us anxious. Similarly, another typical student stereotype is that we spend the majority of our evenings out drinking in nightclubs. Personally, this couldn’t be further from the truth. Actually, I’m approaching the end of my second year at University and I have only been to a nightclub twice in my time here. This is because the loudness of the environment, the cramped spaces and my anxiety, because I know that I look and act different to everyone else really prevents me from doing these things. So, don’t think that we are boring just because we’d rather stay somewhere we feel safe.

‘Really, I’ve learned that there’s nothing wrong with not fitting in. I’m different, but so is everybody. There’s no point in us all being the same.’

University is all about meeting new people and trying new things that you haven’t done before. For most people, this can be a bit daunting. It really is about throwing yourself in the deep end and honestly, that’s not something that I’ve been fully able to do. While I have taken myself out of my comfort zone many, many times in the last two years, it hasn’t been easy. In fact, it has often left me with debilitating anxiety and the feeling that I’ll never fit in. The thing is, there’s nothing wrong with not making loads of friends. The pressure to make more friends at University can be extreme but really, as long as you have a couple of people that you can rely on, that’s all you need. I know that I’m not great in social situations. I get anxious, my words come out wrong and I can rarely make eye contact. Don’t think I’m not interested in what you’re saying and don’t think I’m being rude and unsociable – you wouldn’t believe how many hours it took to convince myself to leave the house today.

It isn’t all about the social situations either. For many courses, group work is integral and this can be a large cause of anxiety in many – especially if that group work leads to an oral presentation. Honestly, I couldn’t think of anything worse. However, there are plenty of ways to get around this and make the experience easier for yourself. Have a chat with your module convenor and see how you can get the marks while making sure you’re comfortable!

I won’t lie and say that University has been an easy experience for me so far. However, with the right support, it has been manageable and up to this point, I have exceeded what I could have ever expected of myself. Surrounding yourself with the right people and making your anxieties known so that they can be prevented as much as possible really is vital.

Really, I’ve learned that there’s nothing wrong with not fitting in. I’m different, but so is everybody. There’s no point in us all being the same.