Dr Helene Hewitt is a Coordinating Lead Author for the Intergovernmental Panel on Climate Change (IPCC) Sixth Assessment Report Working Group 1, Chapter 9 ‘Ocean, cryosphere, and sea level change’.  Helene has also been part of the Met Office Athena Swan Self-Assessment team. Helene joined the Met Office Hadley Centre in 1996 as an ocean scientist, where she worked on evaluating climate models and detecting climate change in the ocean. Since 2003 she has led both ocean and sea ice model development and work on Polar Climate. Helene previously managed the development of the climate model, HadGEM3, which couples the ocean and ice models to the Met Office Unified Model atmosphere. More recently, she led the development of a version of HadGEM3 with an eddy-resolving ocean component. Helene currently leads the Ocean Modelling group and the Joint Marine Modelling Programme. She is a Met Office Science Fellow and a Visiting Professor at University of Southampton.

Helene was joined by Anna Pirani, who is the Head of the IPCC Working Group I Technical Support Unit. She is responsible for the overall management of the WGI TSU as well as providing scientific support to the WGI Co-Chairs and Bureau in the preparation and production of the WGI products through the scoping, drafting, review, approval/acceptance, and publication processes. Anna was responsible for the oversight of the preparation of the Special Report on Global Warming of 1.5°C and the Working Group I Sixth Assessment report (WGI AR6), and also provided scientific support to the preparation of the Special Report on Ocean and Cryosphere in a Changing Climate (SROCC). As part of the AR6, Anna supported the coordination of climate change scenarios across the IPCC Working Groups. Other activities include coordinating the preparation of Summary for Policymakers visuals with information designers and cognitive scientists and fostering the long-term curation of open source software for figures and data used within the WGI AR6. Anna holds a Ph.D. in Oceanography.

We were grateful to be joined by Helene and Anna to talk about their experiences of diversity and inclusion in the last cycle of the IPCC. The choosing of authors for each cycles report is done very carefully to represent a balance of knowledge and geography. In the last cycle (2016-2023), 63% of the authors were first-time IPCC authors in Working Group 1 (WG1). Despite this, WG1 had only 28% female authors, while WG3 stood at 29%. This highlights a clear problem that many people have been working to address in recent years. Below are listed some of the steps that have been taken;

While bringing these biases to light, it was found that the more gender imbalance was spoken of, the more awareness there was and more problems became apparent. There has been an increase in women in leadership within the IPCC since 2016, but this is slow progress e.g. there has not been a female IPCC chair yet. It is hoped that some of these processes that have been introduced in the last cycle will have more impact when the next cycle starts in 2024 as more people engage with the training. It was noted that cultural awareness is still lacking within the organisation, and this is certainly an outstanding problem. Given the progress made in gener imbalance in the last few years, it will be exiciting to see what else can be achieved in the next cycle. 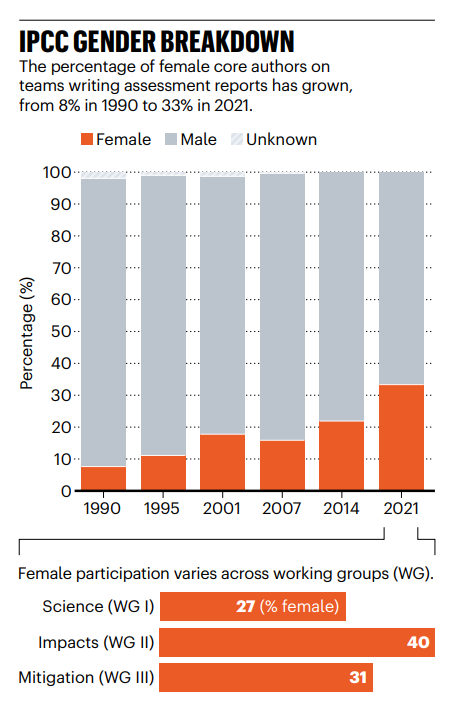 Today is International Women's Day!
Here are some great women scientists at the Met Office, but there's far fewer women than men in senior positions. There's still a lot of work to do to help people of all genders #breakthebias #WomensDay
https://t.co/fvgLZLSheG

On #WomenInScience day, hear from @alicejanelake, Foundation Scientist in the Post-processing Applications team, as she talks about her journey to a career in science at the @metoffice