Posted by Jonathan Cresswell on 02 February 2017 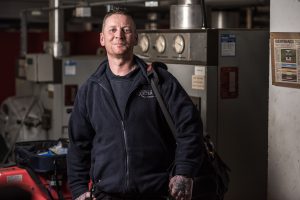 I’m in my tenth year at the University now. I started in the stores, as a store assistant for roughly 6 and a half years. I took over the manager’s role after he left.

I was asked where do I want to be in 5 years’ time, from my structural manager, and I said I wouldn’t mind doing something like a Plumbing apprenticeship. I come from a construction background, fitted kitchens for 10 years, and doing groundwork, so when I was given the opportunity here I went for it.

I spent 6 weeks with the Gas Service Manager for a day a week, and just really loved the work. I thought I could do well at it. I was then given an opportunity to go on a course.

The Gas Service Manager showed me how to do things and let me get stuck into stuff, and I really enjoyed it.

I did a plumbing and heating diploma (MBQ level 2), and have just completed my level 3 plumbing diploma, one year after each other.

The first year was the level 2. I had to sit my level 1 in the summer because I went in as an adult apprentice, so the level 1 could be forced quite quickly through assessing my skill set and me as an individual. I had to re-sit my Maths, English and ICT to be able to get on to the course, which I did at college.

Initially I was petrified, didn’t really know what to expect because it’s been years since I’ve retrained or done anything like that.

The work we’ve had to undertake is above and beyond where we should be in our syllabus and skill set – it’s what you would expect of senior craftsmen.

Ever since I’ve been here from working at the stores, it’s been a really nice place to work and it’s been a pleasure to come in.

I feel more confident in myself and it’s really helped me find career satisfaction.

The rewards at the end of the apprenticeship are brilliant. I’d say if you’re thinking about doing an apprenticeship, do it. Don’t think too long, just get stuck in and go for it.