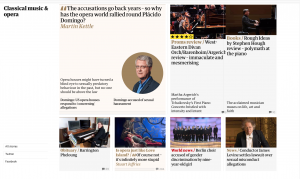 This post is written by network participant Martin Cullingford.

Classical music is still explored today with rigour and expertise, and in great depth, in the specialist media – in print magazines, on radio stations, and online.

In the general media, however, the situation is not so encouraging. There are newspapers that devote feature space to covering classical-music-for-classical-music’s-sake. But not as much as once was the case. And rarer today is the time when classical music is covered in a general news or even features section in articles whose aim is to celebrate or explore the music itself. There needs, now, to be another angle.

You may think I protest too much, but greater coverage is given to, say, literature (the winners of leading prizes), to theatre (the opening of a major play), and certainly to pop concerts and artists. For classical music, it’s generally only given when there’s a story: sometimes a scandal, but more often when something challenges preconceptions. After all, journalists know their audience and their craft: at such times they’ve simply seen a story with wider resonance.

So rather than bemoan the current situation, what I’ll instead be exploring is what insights can be gained, through looking at how, when and why classical music does feature in the general media, into how the artform is perceived in the wider world. Some of those perceptions may be inaccurate – but some might actually prove rather on the mark.

Just these past weeks we’ve been offered two intriguing examples. An unsigned Guardian editorial both equated classical music today with exclusive society events such as Ascot and Wimbledon, as well as describing it as a means for dispersal of trouble-makers. And an Evening Standard column by the CEO of English National Opera argued that its next artistic director should be as well-versed in Love Island as in bel canto composers. Both generated much comment.

But it’s also worth reflecting that if I’m asked by a mainstream outlet to comment on the appointment of a female conductor, and not for equally (musically) exciting appointments of men to podiums, then that is because there are few female conductors. That’s not just a perception problem, that’s a difficult fact.

There are canny promoters who know that the unexpected can grab column inches which would otherwise cover other subjects, but there are also genuinely inspired initiatives and events that deservedly stand out, for challenging public perceptions, but also for perhaps rightly challenging the classical music world itself.

How much does coverage of classical music in the general media reflect perceptions, how much does it reinforce them, and how accurate are those perceptions?

After all, sometimes it can be healthy to be reminded of how the rest of the world sees you…

Martin Cullingford is the Editor and Publisher of Gramophone.