Translated from the Korean by Deborah Smith (Portobello Books, 2017)

The White Book is a short meditation on mourning, as Han Kang explores through words a loss that has accompanied her throughout her life: her mother gave birth prematurely to a girl who lived only two hours, and Han has lived with the knowledge that “I’d been born and grown up in the place of that death.” Shortlisted for the 2018 Man Booker International Prize, The White Book is another stunning collaboration between Han and Deborah Smith, though very different from the book with which they previously won the MBI, The Vegetarian. As you may know, it was Smith’s translation of The Vegetarian that kick-started the Women Writing Women Translating Women project, and it took me a further seven months and over 40 books before I returned to another collaboration between the two. The White Book had been on my to-read list for some time, but if I’d been putting it off, it was because I suspected it was going to be bruising to read. And though in some ways it was, it is also an incredibly uplifting and beautiful book. Even the cover is stripped bare, and seems vulnerable, fragile, serene, with a raised typeface on the front making it seem like an object to touch and feel as much as to read. And it is certainly like no other book I’ve read this year: it is close to poetry with its sparseness and its short lines, its placement on the pages leaving white spaces that seem to be both a void and a possibility. There is something almost spiritual in the reaching out for a connection with a sister to whom Han acknowledges that “if you had lived beyond those first few hours, I would not be living now”. Part invocation, part incantation, The White Book explores a deeply internalised mourning and brings it to some kind of light: the two sisters were never to meet, and still cannot meet on the pages of a book, but yet there is some kind of in-between space, “the gap between darkness and light”, between the blank page and the words on it, where they can each make out the other’s face. 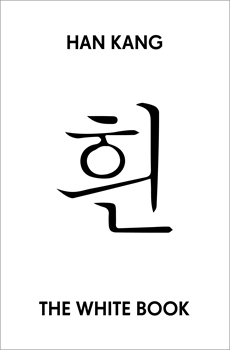 Smith’s translation just took my breath away. I truly believe that she is a very special translator; I do not doubt that this was a difficult text to translate, to grapple with, to absorb and to reflect, but Smith makes it seem effortless. She has that rare talent of making a translation her own without deflecting or vampirising any of the admiration owed to the original. I’m curious to read her translations of other authors, to know whether there’s some special kind of alchemy between her and Han, or whether Smith brings this kind of vulnerable wisdom to all her projects… On almost every page there was a word or a turn of phrase that was so unexpected and yet so absolutely perfect, words layered with meaning, that when placed with the other words next to them turn something simple into something dazzling. Let me give you a couple of examples to explain what I mean: “they would have felt lacerated by happiness. Which would have been life. Which would have been beauty”; “like a clutch of words strewn over white paper”: I would never have thought of being “lacerated” by happiness, yet it shows how the yearning of a soul to live, to find hope, is something close to pain. And what is the mass noun for a collection of words? “Clutch” says so much here: the grouping together of the words, the closeness of the black type on the white page – all of which is aesthetically evident in this book – but also clutching onto something intangible, desperately reaching out with words towards something that slips away… a tale that clutches at your heart.

Growing up “inside this story” of her sister’s death has clearly been a transformative experience for Han, knowing, as she acknowledges to the sister she has never seen, that “my life means yours is impossible”. So what kind of ending can be given to a book this deep, this raw? Han parts from her sister, but draws into herself everything of her sister’s life and death:

“Don’t die. For God’s sake don’t die.
I open my lips and mutter the words you heard on opening your black eyes, you who were ignorant of language. I press down with all my strength onto the white paper. I believe that no better words of parting can be found. Don’t die. Live.”

This inscription of love and loss onto the white paper, imprinted there with “all my strength”, gives life to the sister; pressing down onto the paper, rather than writing on it, transfers the deep emotions in a near-transcendental way. Within the pages, “within […] all of those white things”, writes Han, “I will breathe in the final breath you released.” And so rather than imprisoning a barely-caught memory of her sister within the pages of a book, Han uses the book – both the writing of it, and the artefact of black on white – to bring her sister into herself, and give her life not by writing for her, but by living with her. No easy “healing through writing” is offered up – though right from the start Han acknowledges that she is writing to transform her pain: “the process of writing it would be transformative, would itself transform, into something like white ointment applied to a swelling, like gauze laid over a wound. Something I needed.” But to say that articulating pain means that it disappears is to simplify human experience in a way that Han resists, as she explains that “learning to love life again is a long and complicated process.”

There is depth and complexity on every page of The White Book; this is a book that aches and meditates, not one that offers answers, unless it is simply that “nothing is eternal”, not even suffering. It is both a journey and an endless circle: neither birth nor life is posited as the opposite of death, but rather they are all exposed with unflinching honesty as part of the same continuum. Just as white and black are not depicted as opposites, nor are life and death. Instead, life is plural, endless, twisting – and so is death. What struck me most of all – whether it is intentionally in the text or just my interpretation of it – is that this book is about love. “I will give you white things” writes Han, and offers to her sister, in writing, the breast milk she never lived to drink, the snowflakes she would never see, silence condensed into a pure white pebble, the candles that are lit to her memory. And in so doing, instead of living with the spectre of a dead girl, she offers her life from within herself, the white cloud of breath escaping on a cold morning. This is not a book to read if you want a story, a plotline, or a formula, but if you want to read something incandescent, then this is for you.

My last recommendations stack focused on connections; if fictional dystopia is more your thing right now, here are five great books by #womenintranslation to accompany you through isolation (details in thread):

In our new blog post, here's what the Comma team has bookmarked for their summer reading: https://t.co/SGY8xfotGh

Reply on TwitterRetweet on Twitter34Like on Twitter172Twitter
Load More...
Skip to toolbar