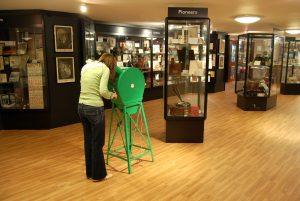 The Bill Douglas Cinema Museum (BDCM) is home to one of the largest collections of material on the moving image in Britain. Both an accredited public museum and academic research facility, it has a collection of over 85,000 items. The museum documents the development of optical entertainment from shadow-puppets and 17th century books on projection, to the most recent Hollywood blockbusters, including artefacts such as Magic Lanterns, rare books, prints, and an extensive variety of publicity materials.

The museum commemorates British filmmaker Bill Douglas (1934-1991), whose work includes the Bill Douglas Trilogy (1972-78) and Comrades (1987). Bill Douglas, together with his friend Peter Jewell, was also a collector and after Bill’s death Peter donated their amazing holdings on the moving image to the University to found the museum, which opened to the public in 1997. The Bill Douglas Cinema Museum is a unique resource, Phil Wickham tell us: “Nothing else in the UK has the breadth and depth of our collections, which range from the seventeenth century to the present day or is as accessible. Instead of holding films themselves we focus on the experience of seeing them or engaging with the devices that preceded them. Together then the artefacts that make up the collection form a people’s history of the moving image that demonstrates how moving images have changed the way we see the world around us.”

The museum’s artefacts include programmes, prints, postcards, toys, books or devices, and are all accessible to both researchers and the public, as a source of engaging with this history. The museum also holds archives by independent British filmmakers in addition to Bill Douglas, including Don Boyd and producers Gavrik Losey and James Mackay. The collections continue to grow and the museum acquires material from many members of the public, who know their donations can be enjoyed and explored by all.

Phil says that “the collections are used extensively for research by academics at the University of Exeter and form the basis for a number of funded projects. Over the past couple of years, the museum has been involved in research topics as diverse as Vivien Leigh, Theatre and visual culture in the nineteenth century and the effect of Western gay films on LGBT communities in China.”

The BDCM supplies materials from its collections to over 100 classes a year at the University across a wide range of disciplines; including History, English and Sociology, as well as being central to the Film Studies programme. Alongside Professor Linda Williams, the Head of Film, Phil teaches a module in which students curate an exhibition as part of their assessment. He states that this “teaches them new skills in curation and teamwork – the collection enables innovative learning of many kinds.”

The collections are particularly useful for student dissertations, in order to undertake original research. Phil stresses, however, that the museum is a research resource for the whole of the academy and not just Exeter: “The stipend scheme has meant that scholars from all over the world have been able to visit and explore the collections. You can read Blogs written about their experiences at: https://www.bdcmuseum.org.uk/research/research-at-the-bill-douglas-cinema-museum/stipends-at-the-bill-douglas-cinema-museum/.”

Discussing how the museum has adapted during the Covid-19 pandemic, Phil told us that rules have meant that the Museum has been closed to the public for much of the year: “We were open for brief periods in the autumn but much of the usual teaching has not been able to take place on campus. We have still been as busy as ever however, especially in scanning materials to create digital resources from the collection for teaching. This allows students to still utilise our collections and apply them to what they are learning.”

The BDCM hopes to reopen in May when restrictions ease. Phil told us that the team “are very excited to welcome visitors back to enjoy our galleries and for us to share our physical collections. While we have all learnt the importance of the virtual over this period, it has also made clear how fundamental the pleasures of going out to places and seeing objects from the past are to us. It will also be great to welcome back the student volunteers that have been such a big part of the museum’s success in recent years.”