Through the Professional Pathways programme at the University of Exeter, intern Nick Collins spent a week in June with Cornwall Museums Partnership…

For many people, working in a museum might sound like a dream job. I was one of those people (and indeed I still am), but in June I was lucky enough to find the only job that is even better – working across several museums, for the wonderful Cornwall Museums Partnership (CMP). My name is Nick Collins and I was with CMP for an all-too-brief secondment from the University of Exeter as part of their Professional Pathways programme. I visited museums and galleries across the county, and below I’m going to share my thoughts on the amazing exhibitions they were running. There’s another theme I’d also like to share. I’ve been trying to show how we can be greener in our museum visits, and help to reduce congestion on Cornwall’s roads, which were as busy as ever this summer. I travelled to all of these exhibitions using nothing more than public transport and my trusty steed (a bicycle, not a horse). But more on that in a moment…

On Monday, I started at Penlee House to see Munnings in Cornwall, an exhibition taking regulars there from the familiar territory of the early Newlyn School into the perhaps less familiar territory of the later Newlyn School, whilst also introducing new visitors to the beauty and humanity of this school of painting. It is that humanity which really shone through in this exhibition – perhaps ironically, given that its principle subject, Alfred Munnings, is best-known for painting horses. But, whatever the paintings show, we have to remember that it was people who made them, and this exhibition told those people’s stories with touching sensitivity. Often, the glimpses we get of artists’ lives are startlingly intimate. Munnings’ painting coat, palette and brushes were there, as were examples of his letters and sketchbooks and his beautiful poem to Jessica Heath. Harold Knight’s portrait of Munnings dominated the entrance to the exhibition, portraying only a few hints of the alleged tension between the two. It is one of three portraits of Munnings, another being a self-deprecating, caricatured self-portrait. Munnings’ contemporaries dominated the next two rooms, with Harold and Laura Knight, Samuel John “Lamorna” Birch, Frank Gascoigne Heath and Charles W. Simpson particularly prominent. They gave us a wonderful insight into the world of the Newlyn School’s less-famous later stages.

Come Tuesday, we made the longest trip of the week, all the way up to Bodmin (yes, by public transport!) to Cornwall’s Regimental Museum. Music was a great morale raiser; the army has known it for centuries – a story told with great insight and originality by CRM’s Citizen Curators, in their exhibition Music, Morale and the Military. There were some fantastic objects, including the D Day dodgers’ banjo, carried by soldiers in Italy in the Second World War in ironic reference to the derogatory nickname forced on them; and a Light Infantry Drum, which tied in very well to the rest of the museum and the superb videos which allowed former members of that regiment to tell its story in their own words. The real highlights, though, were the playable 1920s piano and the new recording of the DCLI Boys Marching Song (a local song probably not heard in almost 100 years), both of which made the exhibition a fantastic place to stay for a while and enjoy the atmosphere. The exhibition was created by the Citizen Curators, a group of five volunteers who put it together over a period of several months. The programme will be running again with new volunteers from October 2019 to April 2020 across several museums in Cornwall. Have a look at this blog post for much more information on that.

The spirit of community curation was alive and well in Falmouth Art Gallery’s exhibition Stuff and Nonsense, which I saw on the Wednesday. There were several pieces of community-curated art, plus the chance for every single person who walked through the door to contribute, with visitors being asked to upload photos of their own “shrines” in response to those created for the exhibition, and also to leave their own found objects alongside those in the exhibition.

The Nonsense half of this exhibition was brilliantly uplifting, featuring illustrations from Quentin Blake, Tony Ross and Edward Lear. There was even a woodblock used in the illustration of Alice in Wonderland, alongside Lewis Carrol’s diary, a real highlight. Several fantastic automata also found their way into the exhibition. The library, housed in the same building, featured more, including an enormous example based on Mervyn Peake’s Gormenghast books. 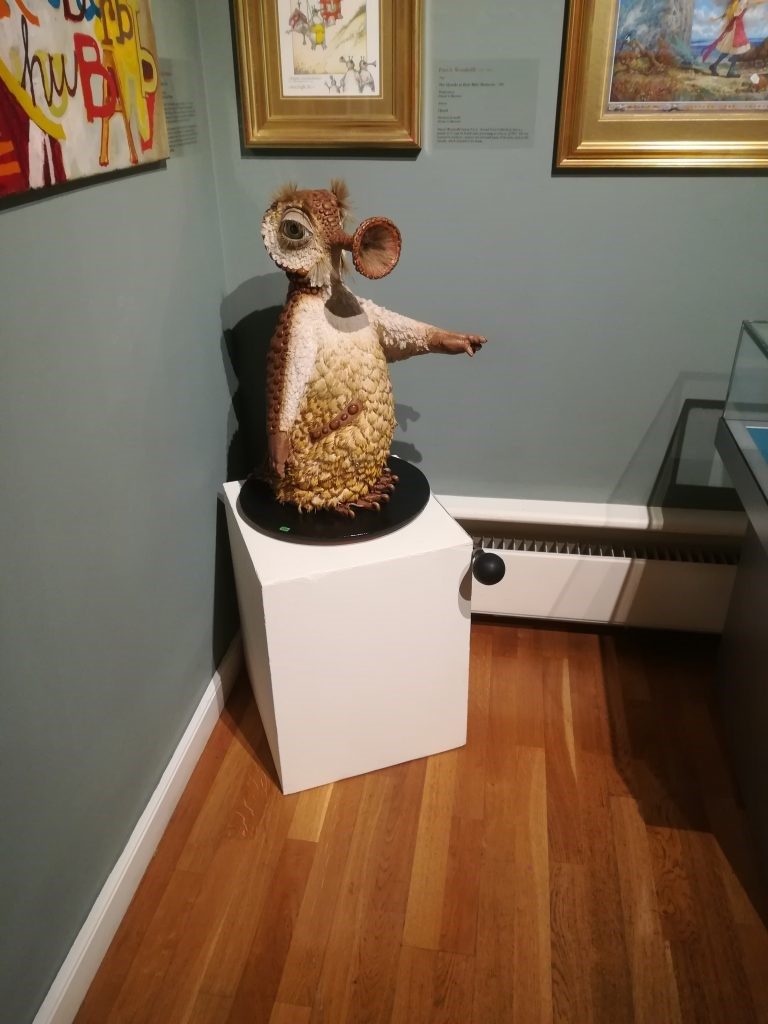 To return to the transport theme, Thursday presented an unusual challenge. Many people would see Portcurno Telegraph Museum as inaccessible by public transport, but there is in fact a bus which stops right outside it. Admittedly, the unusual challenge I mentioned was the fact that said bus broke down in St Buryan on the return journey, but I’m sure that doesn’t happen often… If the owner of St Buryan Caterers, who very kindly gave me a lift back to Penzance, is reading, thanks once again! 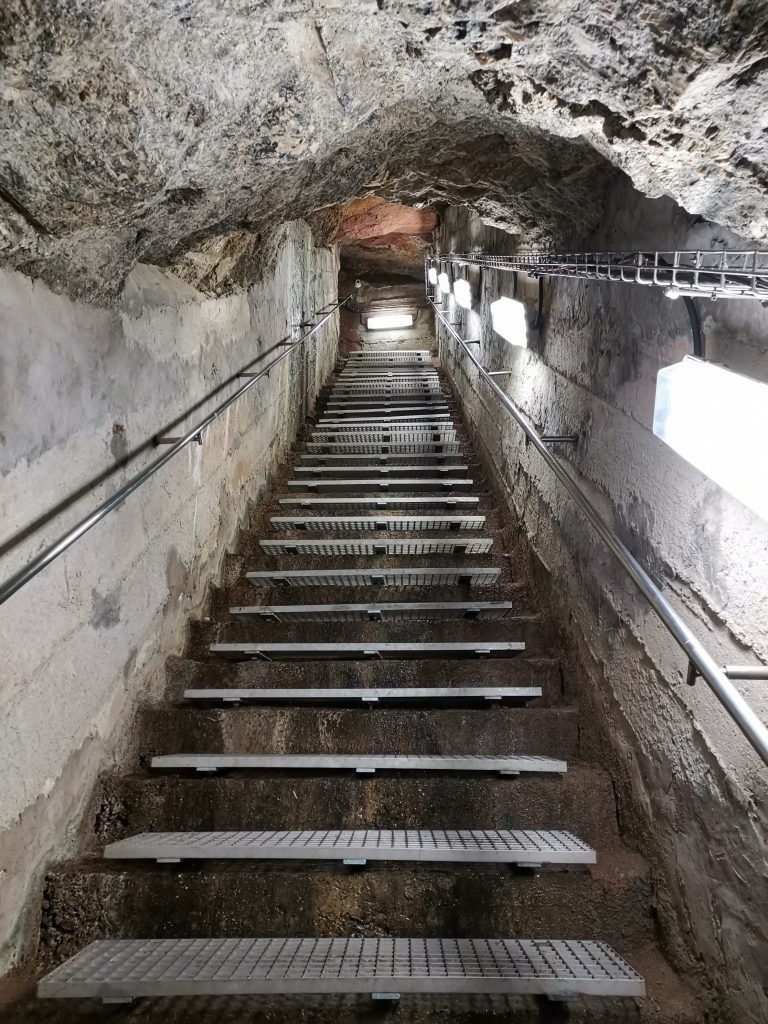 The Telegraph Museum itself is today perhaps more relevant than it’s ever been – as we live through our own communications revolution, it becomes ever more important to understand previous ones. At Porthcurno that story is told not only in terms of the technology (which is covered superbly through working objects and demonstrations) but the people who used and made it, whose lives are shown through their photos and possessions. The highlight is the spectacular Second World War bunker, filled with hundreds of artefacts, many of which are still working. The photo here is the escape stairs, a tunnel leading from the bunker all the way to the surface and beautiful views of the valley.

I finished the week at Royal Cornwall Museum for their exhibition Eye to the Skyexhibition, which told the story of John Couch Adams, who predicted the discovery of Neptune, through Manga. It is an incredible story, and a highly innovative way of telling it. The Manga sat alongside more traditional museum objects, including a large celestial globe and the astonishingly-restored portrait of Adams, which has been transformed from quite literally having a hole in the unfortunate astronomer’s forehead to as good as new. Bringing both of these approaches together created something far better than either style could have achieved alone.

So what did I learn during my week? A lot. More than I can really say. I’ve been lucky enough to work in museums before and if this experience has been an exception it’s because it’s been even better than those other times. Museums tell us stories, entertain us and make us think, but never has it been clearer to me that they can also change lives. From the Citizen Curators who put on such wonderful exhibitions, some of whom have gone on to continued involvement in the heritage sector, to the home-educated children who I saw taking part in a workshop in Falmouth, I have come to understand that museums are about more than probably most people realise. They harness history and the arts as a positive force for the present, and it has been an honour to see how much difference that can make.

I would like to thank the University of Exeter for their part in organising this placement and for the stimulating and enlightening training I took part in. Most of all, I can’t thank the people at CMP and all of the museums in the partnership enough. I hope to see you all again sometime.