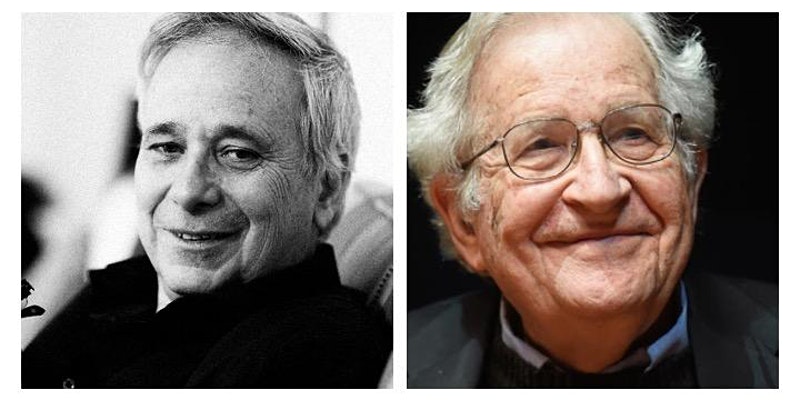 Last week, IICE was pleased to promote A conversation with Noam Chomsky and Ilan Pappé: on impasse, internationalism and radical change – a joint meeting of IAIS, the European Centre for Palestine Studies and the Exeter Decolonising Network.

The sell-out conversation, introduced by Dr Katie Natanel (Gender Studies) and chaired by Professor Sajjad Rizvi (Islamic Intellectual History and Islamic Studies) and Colter Louwerse (MPhil/Phd student in Palestine Studies), touched upon questions of intellectual responsibility and complicity for academia; struggles for justice and transformation within and beyond Palestine, and censorship and acts of collective resistance in our present social and political ‘impasse’. Professors Noam Chomsky (University of Arizona) and Ilan Pappé (University of Exeter) explored how the acutely interconnected major issues and debates of our times- the drivers of this impasse– reflect the state of our culture and civilisation, and explored the tools available to social movements, activists and academics committed to creating a better future in Palestine and beyond.

As introduced by Colter Louwerse, Professor Chomsky has ‘devoted himself to the task of resolving the most pressing political problems of our age, and his unwavering commitment to disengaging truth from the scheme of lies the powerful have concocted to conceal it has inspired and informed the work of untold numbers of young activists and scholars, including those in attendance.’ Beyond his ground-breaking work as the pre-eminent figure of modern linguistics, and within the field of political philosophy, Noam Chomsky’s impact as a public intellectual is inimitable; his oeuvre of meticulous political writings covering the intersecting realms of American imperialism, media criticism and the Israel-Palestine conflict, where his work shares a core focus with Exeter’s own Professor Ilan Pappé. Professor of History at The University of Exeter and Director of the European Centre for Palestine Studies, Ilan Pappé is widely recognised as one of the key New Historians who rose to prominence on the study of Israel/Palestine in the 1980s. He has dedicated much of his career to contextualising and situating the history of Palestine within the larger global context of settler colonialism, directly challenging the dominant and widely accepted Israeli narrative, and has written extensively on multiculturalism, Critical Discourse Analysis and on systems of power and knowledge in their broadest senses.

Drawing upon insights from their combined decades of world-leading research and published works- namely The Responsibility of Intellectuals, The Biggest Prison on Earth: a History of the Occupied Territories, and, of particular salience to this conversation, their co-authored volumes On Palestine and Gaza in Crisis–  professors Chomsky and Pappé interrogated the conditions within which, in a globalised world so defined by movement, flux and instability, a century of Israeli colonisation subsists, unremittingly.

Beginning with the question of Palestine, the conversation moved through the 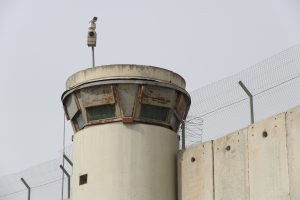 implications of the evermore rightward shift in Israeli politics and the struggles of the occupied territories, to tracing the stark inequalities exposed and exacerbated by the Covid-19 pandemic across the global stage and mapping resistance through decades of racial capitalism. Despite the particular violence of our present global political economy governed by an extractivist, discriminatory, colonialist logic- a violence inherent in the monopolisation of vaccines by richer countries we are presently witnessing- Chomsky and Pappé, crucially, retain a level of defiant optimism in our ability to move forwards in the face of  intractability. In a question posed to Professor Chomsky, Professor Pappé asked, optimistically, whether the Covid-19 pandemic has created exceptional circumstances uniquely able to inadvertently open up ‘new vistas and opportunities for creating a counter-alliance of internationalism and solidarity’. The pair proceeded to contemplate upon whether the kinds of resistance we are seeing now, enabled by digital connectivity, might eventually have the same impact as more traditional action ‘on the ground’ has had through previous lived iterations of political impasse. The focus of the conversation turned incisively to the Black Lives Matter movement, particularly noting its cultural salience, the powerful radicality of its intersectionality, and its success as the most popularly supported civil rights movement in our history.

During the talk, Professor Chomsky touched upon the modes and methodologies of resistance to which we have access, asserting that collective, popularised, ground-up activism has a way of shifting attitudes; expanding the range of things that we are permitted to talk about within the mainstream framework. He proposed that where one decides to ‘push a little at the edges’, as with the newfound possibility for critique of the Israeli government amongst academic circles, one might ‘sooner or later’ have an impact on policy. When asked which is the best way to activate radical change, Professor Chomsky asserted ‘the official line, which of course one should always view with considerable skepticism, is that changes come from leadership.’ His concluding segment drew upon the vital mission of climate justice, spotlighting the recent progress made in the US by Alexandria Ocasio-Cortez and Ed Markey in instituting legislation on a Green New Deal within the past few days, citing grassroots activism and popular action as the essential architectures of resistance required to build the possibility for progress.

The overall message? The situation might be bleak, but there are tools within our reach through which we can co-construct new, more hopeful, social and political futures.

This talk is available to watch in full on the Institute of Arab and Islamic Studies’ YouTube channel. It is a part of a wider series produced by IAIS in collaboration with the Exeter Decolonising Network.

Check out our events page for information regarding our upcoming lecture series, also in collaboration with the Exeter Decolonising Network. For the first talk of this series, we will be welcoming Dr Shaira Vadasaria, Lecturer in Race and Decolonial Studies at the University of Edinburgh, to discuss Anti-Palestinian Racism: Re-examining Race and Racism’s ‘Conceptual Double-Bind.’