When Alison visited the exhibition A Quest for Wellness – Contemporary Chinese Art by Zhang Yanzi at the Museum of East Asian Art in Bath, she learn that in Chinese mythology rainbows are a symbol of mending!

When the heaven was damaged, goddess Nuwa melted 5 coloured stones to patch up the sky which became the rainbow (Zhang Yanzi, 2018). Coloured capsules, bunched together like a rainbow around a wrist, are modern assurance to restore health. 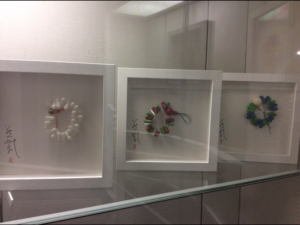 In Celtic tradition the rainbow is a symbol of fertility.In  Norse, Navajo and Maori  mythology rainbows are bridges between two world worlds – our world and a world beyond our realm.

In Greek mythology Iris, (whose  name is found in the word iridescent (luminous colours that seem to change when seen from different angles)  is the personification of the rainbow, and a messenger linking the gods to humanity. There was often a dark side to these messages, as Iris often brought messages of war and death. Some traditions emphasise this darker side for example in indigenous Australian tradition rainbow are, we believe, understood as serpents.

In Jewish and Christian  traditions the rainbow appeared to Noah after the great flood as the sign of God’s covenant that he would not destroy the earth inhabitants again – a positive, hopeful sign. However, the rainbow is also a reminder to us of the darkness of the great flood and the destruction it brought. This can cause us to consider  humans’ roles and responsibilities for  climate change, modern day flooding and sea level rises. and highlight  the need for humans to reconsider their actions, their consumption levels and their relationship with  and valuing of, all matter.

We are currently thinking about rainbows as basis for a visual stimulus and reworking of existing recycling symbols, in order to raise awareness of humans relationships with materials and a pointing towards ‘take care of these materials. 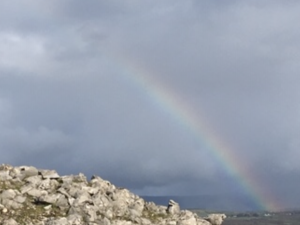 Last week of our exhibition at the Environment and Sustainability Institute, at the University of Exeter in Penryn. It’s been a great opportunity for us to develop and share our thinking on ‘deep materialism’. Now looking forward to taking this thinking forward.

Something our UK government needs to do!

France will ban the destruction of unsold products, including fashion garments in a move to combat waste and put consequences on overproduction: https://t.co/fckkzzGxYy

How can we get our children playing outside again? https://t.co/KmaeFFdDSv @guardian @forestimaginatn

Excited to be setting off early tomorrow for our residency and exhibition opening at the University of Exeter at Penryn, 14 th to 16th May Visit our blog to see invitation details and also our post on the weaver Anni Albers https://t.co/yecEjaK6j0

This is an ancient oak in Combe Hay. Judging by the width of its trunk it’s well on its way to 1000 years old. It has a natural beehive in its canopy, birds nests in its branches and burrows beneath its roots. RT to give some appreciation for this natural wonder!