This week we looked into the catalogue of Bill Douglas Cinema Museum to find few books, which helped us to understand Soviet Cinema and Eisenstein’s major contribution. To start our project, we searched the keyword Eisenstein in the BDC museum’s website. We were provided with a huge list, in which we picked few books to work with. 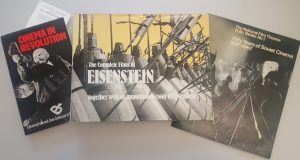 Books that we requested from BDC Museum

About the Book we Chose:

The item we chose was a book called “The complete films of Eisenstein” translated by John Hetherington. This book can show us the film biography of Eisenstein. In the film biography it looks into each film and its criticism, the date they we’re published and his life story. Living all around the world Eisenstein was impacted by different cultures which later impacted his work. It looks into propaganda and how soviet cinema was used for revolutionary ideas. Russia as a country was cut off from the world film market however by 1917 Russian film producers dominated the home market but they run short of equipment. Eisenstein describes “there was a heaviness in those years when the new techniques and montages and revolutionary documentaries and unstudied acting was being discovered and refined”. However the book cant tell us that a pre-revolutionary context, there isn’t much analysis of his films. There isn’t in-depth information on mise en scène, lighting and sound that was used in each of these movies.

Still from the Movie Strike (From: The Books)

Overall, this book helped us gather a further understanding of Eisenstein and his work however only briefly touches on the analysis behind the films. It looks into his inspiration and techniques, which helps us to understand who Eisenstein was in terms of a timeline.

The website itself is an awesome way to explore the museum digitally. The user- 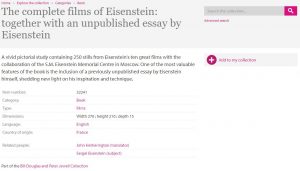 friendly interface, it helped us to easily navigate to different pages. Explore the collection page with the search bar was much more helpful to find what we were looking for. However, one of the limitations that the website has is the fact that it doesn’t provide any images of the search result. We wish there were pictures of the catalogue, as it was hard to know what we are looking for when you don’t know what it looks like. Another issues was the search bar, which didn’t work in a mobile device, as it automatically kept disappearing. On the other hand, the search function was working excellent on a PC/Laptop. With the help of the breadcrumb navigation and the advance search option (allowed us to filter our search results), we were able to easily pick the one that we were looking for.

The archive that we would go for will be the “Bill Douglas Centre Archives”. The reason for this is because, the museum itself is name after him, as he is the one that started collecting these. So, it would be a great experience to know more about him and his work. Mostly we will be interest on “What inspired him to start this?” and “How he managed to be the person, that he is today?”