Translated from the Hebrew by Sondra Silverston (Pushkin Press)

If ever a book has taught me not to judge it by its cover, this is the one. Not because there’s anything wrong with the cover, but because I nearly skimmed past this, thinking that a male doctor suffering a crisis of conscience wasn’t a great fit for this project. The blurb begins: ‘Dr Eitan Green is a good man. He saves lives. Then, speeding along a deserted moonlit road in his SUV after an exhausting hospital shift, he hits someone. Seeing that the man, an African migrant, is beyond help, he flees the scene’. Though it sounded quite intriguing I initially passed over it, but thank goodness my curiosity couldn’t resist the intrigue indefinitely… because in Waking Lions, a tale of secrets, lies, extortion and atonement, I found two women as captivating as they were complex, whose relationship to Dr Eitan Green has inhabited my mind for weeks and who, I suspect, will stay with me long after I might forget the protagonist himself. 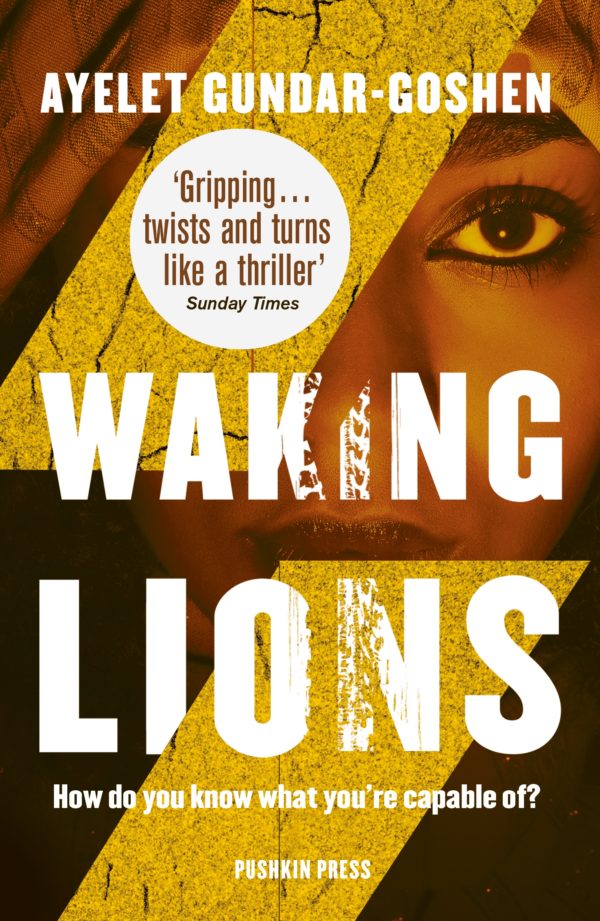 One of the women is Eitan’s wife, Liat, a senior detective in the Israeli police. She is an ambitious professional, a loving mother, and has a keen sense of what is right. The other is Sirkit, a taciturn Eritrean who sweeps floors for a living, and who Eitan would not look at twice if he passed her in the street. She is the wife of the man Eitan killed: she saw what happened, and she comes to demand atonement. Suddenly Eitan’s life is divided between these two women, between intimacy and veneer, between truth and lies, between Eitan Green the medical prodigy and Eitan Green the murderer. In her second novel (following her critically acclaimed debut, One Night, Markovitch), Israeli author Ayelet Gundar-Goshen writes a perfectly flawed anti-hero and two compelling women between whom he is torn, and Sondra Silverston translates so beautifully that I forgot I was reading a translation. There was only a single sentence in over 400 pages that I could nit-pick about (but I shan’t, as it would give away a twist in the tale!)

There’s no waiting around for the intrigue to begin: the prologue opens with the line ‘He’s thinking that the moon is the most beautiful he has ever seen when he hits the man’. When Eitan gets out of the car and looks at the man, he realises that the man is going to die, and that if he reports his involvement, his own life as he knows it will be over. Eitan imagines his detective wife Liat looking at him the way she looks at criminals before they confess, and then ‘it leaped up and grasped him, all of him, the choking icy fear that screamed in his ears – get into the SUV. Now.’ It’s the middle of the desert, after all: no-one has seen him, no-one knew he was there. This decision sets up the uncomfortable underlying question which pervades the narrative throughout: what would you do?

“Liat’s dogged insistence on solving the case of the desert hit-and-run brings her ever closer to a truth she resolutely refuses to see, and the urgency of the narrative as it hurtles towards its conclusion is breathtaking in its brilliance.”

Eitan’s instinctive choice makes him enter a new life, in which by day he carries on as before, but Sirkit owns his nights. Liat presides over their beautiful household where everything has its place, and Sirkit dominates the long hours Eitan spends beside her in a makeshift hospital deep in the desert. Liat is both a strong-willed professional making her way in a man’s world who ‘would rather hate herself than be considered a prude’ and a bruised woman struggling to maintain a relationship with an overbearing mother, come to terms with the death of a beloved grandmother, and raise her own children in a happy home; Sirkit is portrayed by turns as a toxic she-devil existing only to torment Eitan and an intoxicating goddess, his mirror and his obsession. Though there is much of this kind of polarity in the narrative, there is nothing two-dimensional about it: the character development is excellent, and though both women are viewed primarily through Eitan’s eyes, any objectification is subtly evident in the third-person narration (‘Long after he left the garage, she still felt his gaze on her. Men can fasten their eyes on you the way people put a collar on a dog. They didn’t have to tug it; just knowing that the collar was there was enough to make the dog behave’; ‘When he turned his glance from the fence, he saw that she had been looking at him for several moments. That made him uncomfortable. It was one thing for him to look at Sirkit without her knowing it, and something else for Sirkit to look at him’). Sirkit’s ultimate unknowability is where her power lies: she is an enigma that Eitan simultaneously hates and wants to penetrate. Similarly, Eitan’s wife is no caricature: Liat’s ‘exhausting composure’ subdues even the most misogynist male prisoner, but she is still described as ‘that hot little pussy from the police’, and plays her part in a patriarchal hierarchy in which she allows herself to be patronised by her male colleagues and pretends to be impressed by them because ‘what else could she do?’ Like Sirkit, though, Liat has her own backstory: she was raised in relative poverty, is as proud as she is sensitive, and is characterised by a profound humanity that makes her want to believe her husband’s ever-spiralling lies even as she senses that their previously stable relationship is crumbling at the foundations. This is no ordinary domestic love triangle drama though: Liat’s dogged insistence on solving the case of the desert hit-and-run brings her ever closer to a truth she resolutely refuses to see, and the urgency of the narrative as it hurtles towards its conclusion is breathtaking in its brilliance.

Alongside social comment on the plight of migrants and the repeated imagery of crossing a desert, Eitan’s own journey unfolds: if, for Sirkit, ‘to emigrate is to leave one place for another, with the place you’ve left tied to your ankle with steel chains’, then when Eitan climbed back into his SUV after hitting the man, he emigrated from his ordered life of privilege, and limped away from the accident with that night in the desert tied to his ankle with steel chains. There is no moralising: right and wrong are blurred, and we are reminded that there are times when ‘being human was a privilege’. This is an ambitious novel which gives pause for thought in several ways: as a reflection on racism and otherness, poverty and privilege, intimacy and misogyny, corruption and survival, and on the way life can change in an instant. The side-stories are all connected, and if they come together a little too neatly, I can entirely forgive this in the name of a good story. Ruth Gilligan has a offered more reserved appreciation for this novel, pointing to a ‘problematic tone’ in places and some ‘awkward similes’, but I didn’t pick up on these while reading. If they were there, they must have gone unnoticed because I enjoyed the story so much. The descriptions are vivid and immersing; in some ways, reading this novel felt comparable to watching a film. It’s a powerful, suspenseful, electrifying read, an escapist joy and the literary equivalent of its own central plotline: a jolt that will shake you out of any inertia, sweep you along into a world you had never imagined, and stay with you long after it’s over.

Reply on TwitterRetweet on Twitter5Like on Twitter10Twitter
Load More...
Skip to toolbar