“The Domino Effect in Seizure Onset in Epilepsy” available here: https://www.youtube.com/watch?v=D98HH-n5Goc&t=1s and at end of this blog!

It looks like a domino effect, so why not try and make it in dominos?

This was the thought that started off an adventure into a combining domino art and epilepsy research. 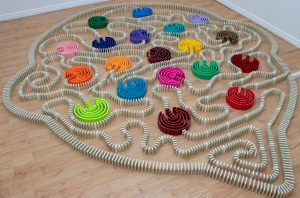 As a researcher in mathematical neuroscience at the University of Exeter I use mathematics to understand the behaviour of the brain. I am interested in how the brain functions when someone is healthy and what happens when someone has a neurological disorder such as epilepsy.  To do this, I think of the brain as a group of different regions that are joined together in a network. These regions are constantly communicating with each other using electricity.  When someone has epilepsy, they can have large bursts of electrical activity (like a power surge) in the brain that cause seizures. This brain activity can be recorded on the scalp. These recordings are important as they are used by doctors to diagnose and treat epilepsy. The recordings contain lots of different patterns when the brain switches from resting activity to seizure activity, some of which make diagnosis really hard.

What has all this got to do with dominos? Well, I had been looking at some patterns in recordings of brain activity from people with “generalised” epilepsy, which is a type of epilepsy where seizures affect the whole brain (as opposed to just one region). I noticed that if you rearranged the recording the seizure looks like it spreads across the brain in a cascade or domino effect.  I thought, “I wonder if there is a way to show these bldomino patterns in real dominos?”

My colleagues were really supportive of the domino idea and I managed to secure some funding from the EPSRC Centre for Predictive Modelling in Healthcare to make it a reality. 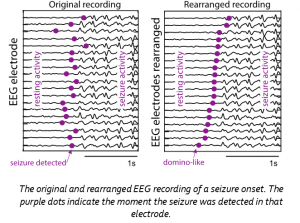 I chose two EEG recordings that showed two different ‘domino’ cascades. My vision was to set up dominos in the shape of a brain in which different areas would fall down in the same order as the EEG recording. I quickly realised that this would be no easy undertaking. I needed a domino artist; someone who designs and builds intricate domino setups for a living.  After a few internet searches (avoiding the well-known pizza company) and a few email inquiries, I was put in touch with Steve Price of SPrice Machines. SPrice Machines creates bespoke chain reaction machines and vibrant domino art that are used in adverts, on tv and at live events.

Steve is based in San Diego so we arranged to meet virtually (before the pandemic made it cool and the video quality noticeably better). We chatted about my idea and how he could bring it to life with his 200 thousand dominos in 57 different colours. Based on his previous work we decide to represent the EEG electrodes as coloured domino circles connected by lines of white dominos.

One of the most challenging aspects of the design was ensuring that the domino circles fell over in the same order and with the same timing as the corresponding electrodes detected the seizure.  To do this the paths between the domino circles had to be the right length – the longer the path the more time between circles falling. The rearranged recordings of the two patterns I had deleted gave me a list of times that each electrode detected the seizure. From this I extracted the time of detection from one electrode to the next and so on. I then scaled these to make whole numbers, so if it took 0.07s from one electrode to the next I converted this into 0.07×200 = 14 dominos. This gave a starting point for the domino path lengths. Electrodes that are next to each other in time are not necessarily next to each other on the head, for example the 5th and 6th electrodes to detect the seizure are on opposite sides of the head in one example.  Armed with the path lengths and the positions of the electrode on the head I got to work drawing a plan to combine it all. This took many hours to get right, but I really enjoyed the challenge.

The initial plans done, I sent them to Steve. He was then able to use them to create a final plan to scale and work out how many dominos were needed for the build. The build and recordings took a week to complete. Each pattern was set up over many days and then knocked down in a very satisfying instant. 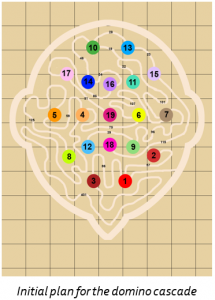 Linking it all together

The videos on their own were even better than I imagined. As stand-alone art they looked great, but to link them back to epilepsy needed a bit of explaining.  To help me with this I hired Joe Metcalf, Director of Global Focus. I had worked with Joe previously to create a video abstract about how I use maths to model this domino effect seen in epilepsy. 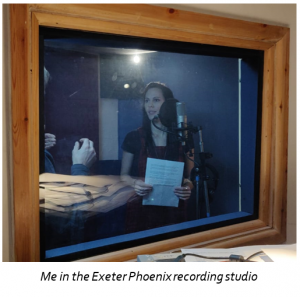 Joe asked me to write a script and story board for the video that would combine the domino footage with animation under a voice over. To ensure the script was accessible and accurate I worked with International Epilepsy Awareness Ambassador Simon Privett and Communities Engagement Manager Silvia Bortoli who both provided valuable feedback.  To record the voice over Joe hired a recording studio at the Exeter Phoenix. Having done a voiceover for my previous video I knew that to sound normal on the video I needed to enunciate with enthusiasm in the recording. This feels very unnatural when you are informing people that epilepsy is a chronic neurological disorder. After a few false starts we got a couple of versions that Joe could pick the best parts of.

The videos, the voice overs and images of the brain activity recordings now in hand, we were able to piece it all together. The final result is a combination of art mathematics and neuroscience that I hope contributes to raising awareness of epilepsy and epilepsy research.

View all posts by Silvia Bortoli