Our project has once again featured in the monthly ‘Omukwetu’ newsletter, published by the Evangelical Lutheran Church in Namibia. Reverend Thomas Uushona, the chief editor (and a partner of ours on the Disability in Namibia project), has written about our workshop for ELCIN clergy held in Ondangwa in March 2021: 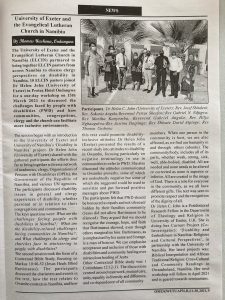 Thank you, Reverend Thomas and Omukwetu! 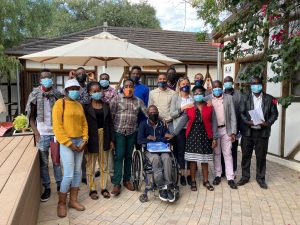 Thanks again to all of those who participated in the workshop 21st-23rd April 2021 at the Roof of Africa Hotel in Windhoek. We were delighted to host OPDs, ELCIN, and two Windhoek Seminaries (Paulinum and the Namibian Evangelical Theological Seminary) for discussions and Contextual Bible Studies (Mark 10:46-52 and 1 Corinthians 12:12-31) on the theme of ‘Disability in Namibia: Religious and Cultural Perspectives’. It was such a productive few days and a delight to meet everyone!

Here is a summary of the discussions (see earlier posts for summaries of discussions in December 2020 and March 2021):


For further details of the project, or if you wish to get involved, please do email Dr Helen John on H.C.John@exeter.ac.uk

We recently held our third networking workshop on ‘Disability in Namibia: Religious and Cultural Perspectives’ at the Roof of Africa Hotel and Conference Centre in Windhoek. Across the three days of the event (21st to 23rd April 2021), attendees gathered from Organisations of Persons with Disabilities, churches, seminaries and universities for a network meeting, academic presentations, discussion sessions, and Contextual Bible Studies, and the opportunity to share a meal and informal conversation. 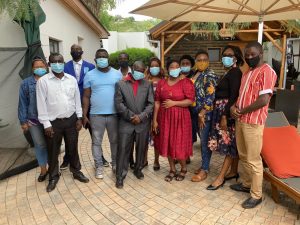 Participants joined us either in person or virtually from:

The Namibian Organisation for Youth with Disabilities (Ms Suama Nangolo)

The Namibian Federation of the Visually Impaired (Mr Moses Nghipandulwa)

Thank you to all of those who took part and made it a great three days, full of productive discussion, insightful contextual biblical interpretation, and helpful suggestions for future collaboration and activities. Thank you also to Ms Aune Ashikuti and Ms Helena Nadala for providing Sign Language Interpretation for the event.

A summary of the discussions will follow shortly. For now, here is the workshop programme:

Thank you again to the pastors of the Evangelical Lutheran Church in Namibia (ELCIN) who participated in our workshop in Ondangwa on March 15th 2020. We could not have hoped for such productive discussions or such an engaged group of participants! Find below a summary of the discussions. 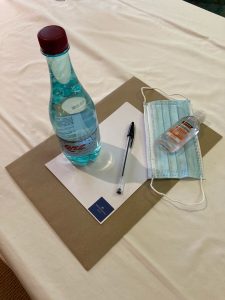 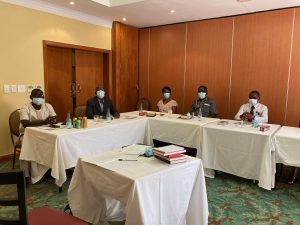 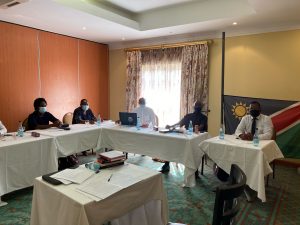 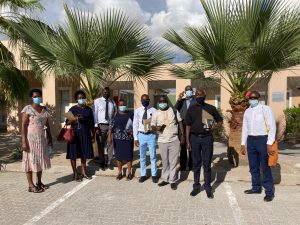 We were delighted to host 10 members of the clergy from the Evangelical Lutheran Church in Namibia at our workshop on 15th March 2021 in Ondangwa, northern Namibia. It was a hugely informative and worthwhile event, wherein we heard from so many perspectives and experiences.

A summary of the discussions and the findings of the workshop will follow shortly! For now, here is the outline of the day:

An international footballer, coach and aspiring referee, Eudy Simelane dedicated her life to the sport.

She was one of the first openly gay women to live in her township of Kwa-Thema in South Africa and was a well-known LGBT+ activist.

But because of her sexuality, Simelane was brutally raped and murdered in 2008, aged just 31.

This is the story of her life and how the legacy of her death is still impacting South African society.

‘She was a diamond’

Simelane was born on 11 March 1977, in Kwa-Thema, a township in the Gauteng province, south east of Johannesburg.

Her interest in football started when she was only four years old, demanding her brother Bafana always took her to practice with him despite it not being a sport commonly played by women at the time.

Passion soon became dedication as she honed her skills daily.

“Five o’clock in the morning, she [would be] at the gym – football was her favourite and her priority”, her late mother Mally recalled at a memorial lecture in 2016.

Speaking to the BBC World Service in 2018 about Simelane’s popularity on the pitch, her father Khotso said: “Everyone came to the ground when she played, number six”.

Springs Home Sweepers has produced a number of stars including Janine van Wyk, South Africa’s most capped footballer and captain of the national team, known as ‘Banyana Banyana’, meaning ‘the girls’.

A campaigner for equality rights and social change, she was one of the first women to come out as a lesbian in South Africa.

In the 2020 Eudy Simelane Memorial Lecture, her brother, Bafana said: “In sport she was a diamond, scoring beautiful goals. She was a marvellous person, intelligent, everything. It was a package. Everything you would find in Eudy. Jokingly she was playing, teasing others. That is what I miss about her.”

On 27 April 2008, Simelane’s body was found in a stream just a few hundred metres from her home in Kwa-Thema.

Reports stated she was approached after leaving a pub, raped and then stabbed repeatedly.

Despite her death shocking many, activists claimed many lesbians in South Africa were targeted for ‘corrective rape’, a crime where the perpetrator aims to ‘cure’ the victim of their sexuality, converting them to heterosexuality.

‘It opened the eyes of many’

Simelane’s sexuality put her in a vulnerable position, something her mother recognised, telling the BBC, “the whole of South Africa knew Eudy was a lesbian”.

The unfortunate reality is Simelane’s story isn’t unique – she is one of many victims of similar, horrific crimes in South Africa.

A year prior to her death, Sizakele Sigasa, a women’s and gay rights activist, and her friend Salone Massooa, were heckled outside a bar and called ‘tomboys’. The women were then gang raped, tortured, and shot dead.

Just a few years after Simelane’s murder, Noxolo Nogwaza, a 24-year-old lesbian, was found beaten and stoned to death in the same township Simelane lived.

However, as a country, South Africa was at the forefront of same-sex rights and became the first African nation to decriminalise same-sex acts in 1998.

The country also legalised same-sex marriage in 2006, seven years before the act was passed in the UK, and two years prior to Simelane’s tragic death.

Despite this, the country still has the highest number of recorded rape cases per capita. Within this, it’s young, black, lesbian women that often fall victim to violent ‘corrective rape’ crimes in South African townships.

According to data released in 2017, 49% of black members of LGBT+ communities in the country are likely to know someone who has been murdered for being LGBT+, compared to 26% of white community members.

More often than not, the perpetrators of these awful attacks are not prosecuted for their actions.

Simelane’s case has been an exception though. Her profile and story captivated the nation and brought the issue of ‘corrective rape’ to attention.

Following Simelane’s death, her mother Mally was instrumental in the fight to change her communities’ views on homosexuality, using her Methodist faith as a platform. She united with her local Pastor, Smadz Matsepe, in a fight to change attitudes towards LGBT+ individuals in society. Mally was fully committed to fighting prejudice until her passing in 2019.

“It opened the eyes of many and it challenged us to deal with the LGBT+ issue,” Matsepe told the BBC.

A bridge was built over the stream in Kwa-Thema, next to the football field where Simelane’s body was found. The bridge features her face imprinted on it and was built “as a reminder of the freedom, dignity and equality for all”, according to the Lesbian and Gay Equality Project in The Times.

Another initiative set up with the aim of changing social attitudes, was The Eudy Simelane Memorial Lecture. This annual lecture, in partnership between the Ujamaa Centre at The University of KwaZulu-Natal, The Other Foundation, Pietermaritzburg Gay & Lesbian Network, the KwaZulu Natal Christian Council, and Simelane’s family, aims to change attitudes towards LGBT+ people, particularly within some religious communities.

These bodies recognised that for there to be a significant social change, religious communities needed to adopt a new outlook on same-sex relationships and marriage, so that individuals could not try to use religious grounds to justify violence against LGBT+ people.

Professor Charlene van der Walt from the University of KwaZulu-Natal and Deputy Director of Ujamaa Centre told the BBC this year: “Eudy’s story is an example of what happens to a lot of families and a lot of faith communities, yet the issue of LGBT+ people in faith is often denied or invisible.”

The lecture is also an opportunity to stimulate conversations around LGBT+ communities.

Van der Walt added it was especially important to continue these conversation during the Covid-19 pandemic where LGBT+ people are “vulnerable” because they often are “in a family setting that doesn’t accept” their sexuality.

“We have made a massive leap in the right direction,” she said.

In the 2020 lecture, Simelane’s brother Bafana, said: “History repeats itself, so now, this lecture is eye opening to the community and other families that they must not take it as a curse if someone is gay, lesbian or transgender”.

Despite the tragic death of Simelane, it sent an important message across South Africa and was a catalyst for these projects and conversations to take place.

If you’ve been affected by issues raised in this article, there is information and support available on BBC Action Line.

A transcript of the full keynote can be found here: