Cobalt is becoming more and more important in modern technology, particularly through its use in rechargeable batteries for solar power and electric cars, and as permanent magnets in wind turbines. Despite this we still do not fully understand the factors that control how cobalt behaves in the environment. 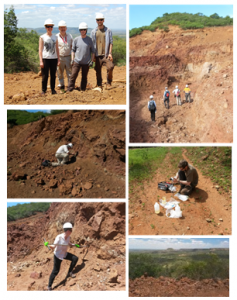 Laterites are highly weathered rocks that form in tropical conditions and typically dominated by iron oxides minerals. Laterites can be enriched in metals like cobalt and nickel. In fact over a third of the world’s cobalt and nickel supply is sourced from laterite deposits. This research project aimed to investigate the form of metals in four different laterite deposits from across the world, to characterise their environmental behaviour, and to test whether we can use microbial processes to help recover metals from laterite rocks.

The results showed that the cobalt in laterites was systematically associated with manganese oxide minerals in all of the laterites that were examined, even though the manganese oxides were only around 1 % of the rock. Cobalt behaviour closely mirrored that of manganese during experiments performed to simulate different environmental conditions. The laterites contained microbial communities which were mostly bacteria typically found in soils, but also very low amounts of fungi.  Applying organic matter (such as glucose) to the laterites stimulated the microbes to use up all the oxygen and generate anoxic conditions. During this process the manganese oxide minerals were dissolved (by microbes reducing manganese(IV) oxides to aqueous manganese(II), a form of respiration that mostly occurs when oxygen is limited), and some of the cobalt was liberated. Rinsing the laterites with acetic acid allowed up to 64 % of the cobalt to be recovered, as well as 12 % of the nickel. Therefore we proposed a new two-step bioprocessing strategy (https://youtu.be/9t2tHyQgSjQ), where firstly glucose is applied to the laterites and left to allow anoxic conditions to develop, then secondly the laterites are rinsed with acetic acid to recover the cobalt. Glucose and acetic acid are cheap, widely available, and environmentally-friendly organic substrates and potentially could be sourced from waste materials.