In a secluded corner of the Mendip Hills can be found a nature reserve with a surprising history of ancient Roman mining, an 1863 lawsuit for environmental pollution, a major cave system beneath the surface and now the focus of 21st century scientific research.

Lead mining at Priddy was thought to have started in the Iron Age. It was scaled up when the Romans arrived, and again in the 1800s thanks to new mining technologies becoming available. The mining activities seriously polluted the surrounding areas and the site was abandoned in the early 20th century. Nowadays few signs of its industrial past can be seen (Figure 1). Despite the lush vegetation, the soils are actually highly contaminated with toxic metals from the former mine workings, particularly lead. When it rains these metals leach into the underlying limestone rock and groundwater, causing environmental pollution. 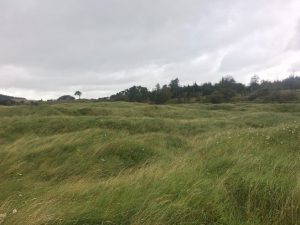 Figure 1: The Priddy Mineries nature reserve on a wet and windy summer’s day

The Bristol Exploration Caving Club have long been aware of this. They discovered black crusts coating the cave walls, which are unusual because limestone is normally white or cream coloured. Tests done in the 1970s showed that these crusts contained high concentrations of lead, most of which almost certainly came from the former mine workings. To find out more about these black crusts and how they formed, we asked the cavers to collect more samples (Figure 2), and then did some additional tests to investigate their mineralogy, chemistry and microbiology. 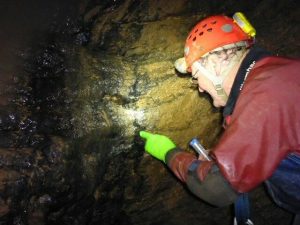 Our results showed that that black material is a manganese oxide mineral called ‘birnessite’. This has a strong affinity for metals including lead, meaning that these manganese minerals act as a filter by removing the toxic lead from groundwater and trapping it in their crystal structure. So how do these minerals actually form?  Normally manganese minerals form very very slowly. But certain types of bacteria and fungi can speed up the rate of mineral formation by using special enzymes. To investigate whether microbes were making the cave manganese minerals we did two things. Firstly we extracted and sequenced DNA from the black cave crusts. This showed that they did contain bacteria and fungi that are known to be able to produce manganese minerals. Secondly we grew these microbes in the laboratory and found that not only could they produce manganese minerals, they could still do it even when lots of toxic lead was present. Please follow the link to the scientific article and its supplementary materials if you are interested in seeing images of the microorganisms and the minerals taken using powerful microscopes (and all the other data of course!).

In summary, microbial activity is likely to be responsible for forming the black manganese mineral cave crusts that are filtering lead from groundwater and cave waters, and therefore microbes are helping to clean up pollution from historic mining activities (Figure 3).

By Laura Newsome, Camborne School of Mines, University of Exeter

Information on the Priddy Mineries