The outer solar system harbours numerous planetary objects of diverse internal and surface structure. Past spacecraft missions such as Voyager, Galileo, Cassini and New Horizon missions found indications that some of these objects (e.g. Europa, Ganymede, Callisto, Enceladus, Titan, Triton and Pluto) may conceal subsurface oceans beneath an icy surface. The possibility of sustaining a liquid ocean concealed beneath an icy crust clearly makes them a prime target for the search for extra-terrestrial life. Present models of the interiour of icy ocean worlds are based on knowledge determined during close flybys in spacecraft missions, for a more accurate characterisation of the interiour, however, geophysical investigations on the surface are key. 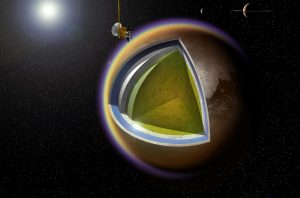 Interiour of Titan. The blue layer represents the subsurface ocean the white one the icy crust.  IMAGE CREDIT: NASA

Therefore, NASA is planning the Dragonfly mission, which will launch in 2026 and arrive in 2034 on Saturn’s moon Titan. Dragonfly will deploy the first seismometer on Titan, which will allow to draw a more accurate picture of the interiour of this icy moon. 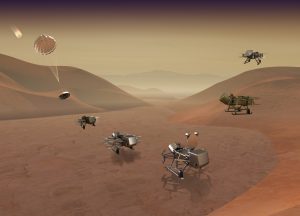 To set constraints upon the habitability of Titan’s subsurface ocean it is of vital importance to know its chemical composition. A straightforward way to determine the chemical composition of an ocean is by studying the minerals that crystallize from this ocean. For instance, extensive halite (table salt) deposits can be found in the vicinity of active and past oceans and tell us that these oceans are rich in sodium and chloride. In the case of icy ocean worlds, minerals that are in contact with the ocean are either sediments at the bottom of the subsurface oceans or minerals that crystallize from brine that ascends through fractures in the thick ice shell .

In order to identify a mineral by means of seismology one needs to accurately know its seismic fingerprint (i.e. the speed at which sounds travels through the mineral). Determining seismic fingerprints experimentally is a very tricky task and therefore was mainly done for minerals that occur in the Earth’s mantle.

The mineralogy of Titan, however, is largely different and includes, next to the main component ice, compounds such as benzene and carbon-dioxide which condense due to the very low surface temperatures. One of the major challenges of determining the seismic fingerprints of such phases is their low melting point, which makes the sample handling very complicated. An alternative route to determine seismic fingerprints is by applying density functional theory, a computer modelling technique that solely relies on the rules of quantum mechanics and fundamental constants in order to model properties of materials. The modelling of loosely packed solids such as condensed hydrocarbons by density functional theory has just recently come into reach.

The objective of our study was to find out how accurate seismic fingerprints determined by density functional theory are and if this technique is suitable to create a library containing seismic fingerprints of minerals that likely occur in icy ocean worlds. Such a library could then be used by the Dragonfly and other future space missions to explore the mineralogy and eventually chemical composition of the presumed subsurface oceans.

Therefore, we have accessed the SCARF cluster, a supercomputer having over 13 000 cores, in order to model the seismic fingerprint of four phases (benzene, carbon dioxide, gypsum and epsomite), whose seismic fingerprint is precisely known from experiments and that all likely occur on icy ocean worlds.

We have found that density functional theory yields very accurate results for simple molecular solids such as carbon dioxide but fails to give accurate seismic fingerprints for more complex compounds. Therefore, we conclude that experimental measurements of seismic fingerprints are still inevitable, however, it should be noted that density functional theory is a very active field of research and new techniques yielding more accurate results are constantly emerging. Importantly, we found that density functional theory excellently models the mineral densities at pressures relevant to the interiour of icy ocean worlds. This data is particularly useful to model salt diapirs in the icy mantle and might find application in future models of icy ocean worlds.